Trentham is situated on the edge of the Wombat Forest. Not far from us is Victoria's highest falls.
We took guests there only last week. I've posted photos of the Falls previously however this time other parts of the reserve attracted my attention. 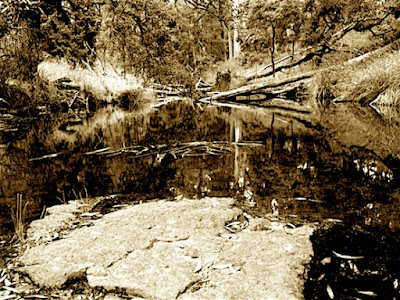 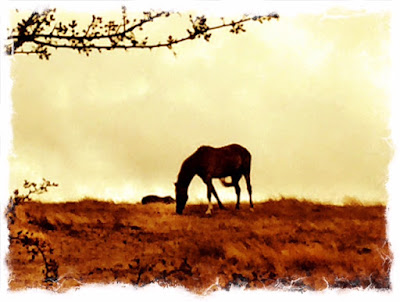 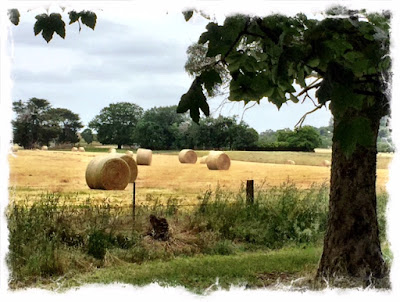 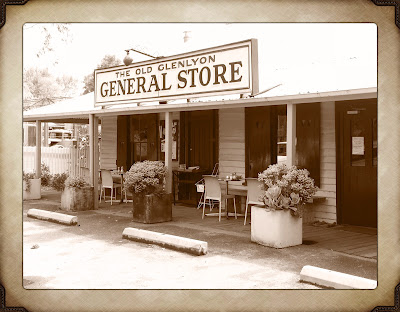 Up the Garden Path

We recently took a drive 22 kms up the road to Daylesford for lunch at the Wombat Hill Botanic Gardens. The gardens are located at the highest most point of Daylesford - a great outlook.
But once within the gardens, you are in a world of colour. Paths lead in different directions taking you to little surprises.

One of those surprises was a statue shown here. Reading the plaque, you see that it was presented to the Wombat Hill Botanic Gardens by the family of Stuart Rattle. Stuart Rattle died in tragic circumstances which can be Googled. No need to be discussed here. Needless to say, Stuart was very talented and brought much joy to those who love their gardens. 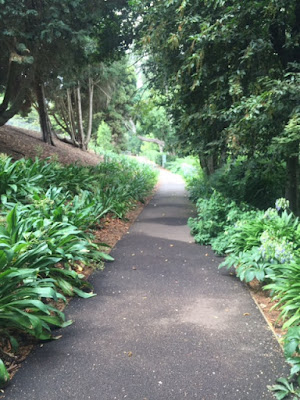 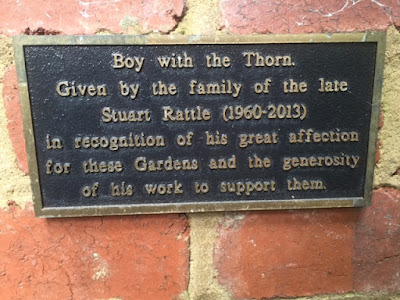 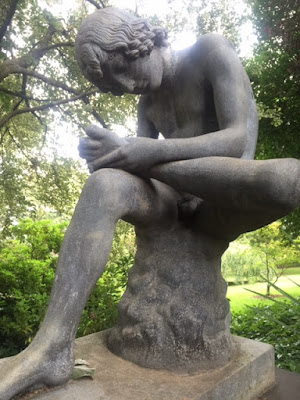 Attached below is a youtube segment of Stuart Rattle's MUSK FARM. It's just 15 kms from Trentham.

This is most likely the last post on the interior of our new home in Trentham, although the two additional bedrooms are still being decorated.

So, here is our bedroom. We never saw an example of the house before we built. The builder didn't have a display of our plan. We did however make a few alterations, one of which was that we deleted the baths and made the showers open and larger.

Where the en-suite bath was to be located, we turned the wall around so it became an alcove to the bedroom. Sue uses this as her reading area. 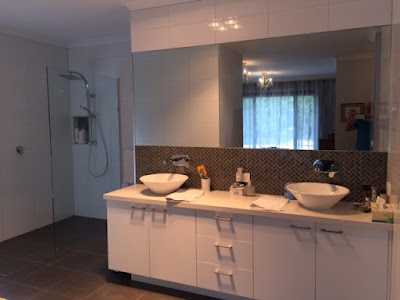 So that's the house and from this point on, posts will be of Trentham and our surrounding district.
The area is alway busy on weekends with festivals, markets, cafes and hidden treasures. We hope to bring you more of these with now regular posts.

Tomorrow we have a BBQ for a foodie group that Sue converses with in a Forum and this is the second time that some the group have met. On Sunday we are all off to a huge market day in Daylesford, 22 kms up the road so most likely we'll post photos of it.

Trentham these days is 22 kms away from the nearest railway station. There are two, one at Kyneton, the other at Woodend. Should you wish not to drive, there is a regular bus service to the Woodend station. There was at one time a railway that ran from Daylesford through the smaller towns of Musk and Bullarto to Trentham and then on to Fernhill and meeting up with the Bendigo to Melbourne line. The Trentham station is now our Tourist Information Centre and is used for our monthly craft and garden market. Its also used for a starting point for our local Classic Car Club runs.

Commencing in 1880, it was a continuous working railway up until to 1978. As well as a passenger train, goods trains ran timber from several mills in the area. Being a prolific potato growing area, the goods train would transport produce to the markets in Melbourne. 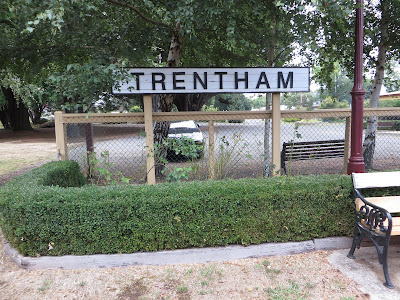 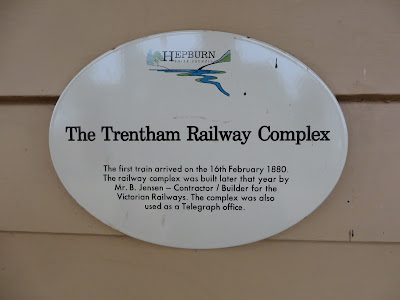 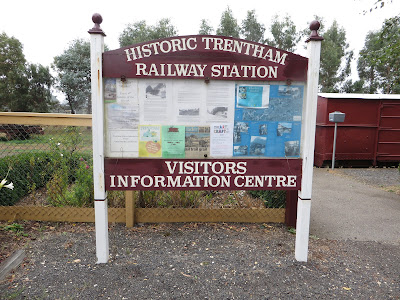 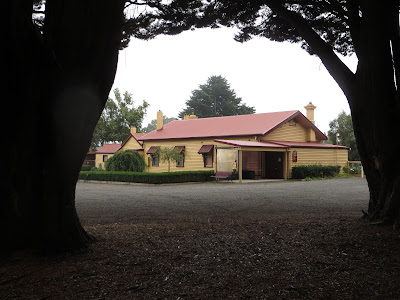 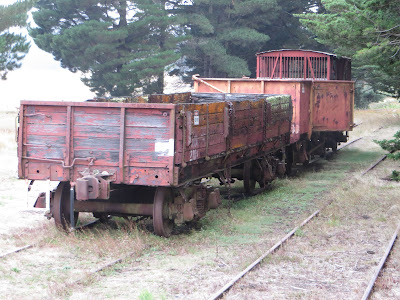 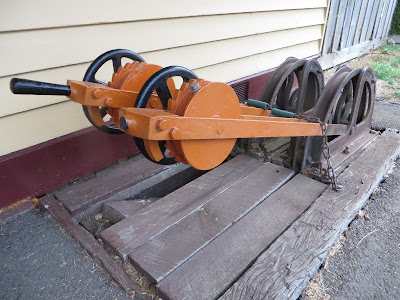 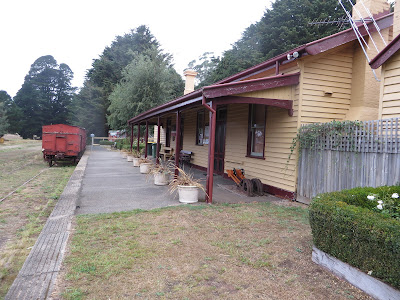 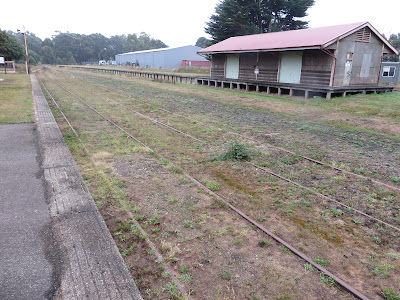 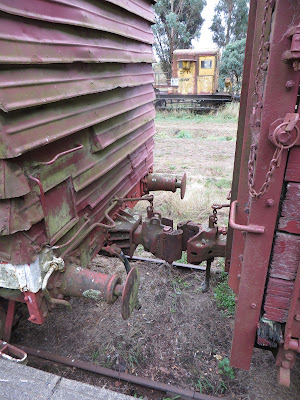 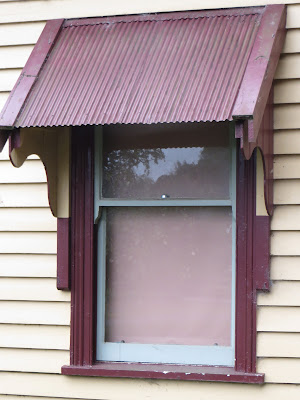 Typical of Victoria's stations, the maroon and cream colour scheme has been retained although most of the existing rolling stock may well be past any form of restoration. Being halfway between the starting point of Daylesford and Woodend, it is the largest existing station where there is little sign left of the smaller stations on the past line.

From what I can see, it had three sets of tracks into the station with the goods train picking up produce from the north side. There is a tourist train that utilises the original tracks up the line which starts from Daylesford and ends at Bullarto, midway to Trentham. Maybe one day the line might be reopened to Trentham as a further tourist attraction, however I doubt it due to the cost.

Welcome to our Home - Do come in.

We only just moved in three months ago but we already feel like we've been here forever. The people are friendly and are always up for a chat in our small community of close to 2000 population. Its a real mixture really with the long time locals, the new retirees such as ourselves and many young families that are searching for an alternative to the busy bustle of Melbourne. Our Primary School had an enrolment of 100 pupils this year confirming that young couples wish for their children to grow up in an alternative to stress of city life.


Anyway, come in from the door way and we'll show you through.


We'll show you around to some other rooms on your next visit including our outside work to date but that's another day. We also want to show you our local area, the businesses and the people who run them. Most of all, we hope to share with you the life in a small rural village in Victoria's Central Highlands.

We should return to almost three years ago to explain why we now live in rural Victoria. In 2014 we returned on our sixth visit to France. Our good friends Carol and Michael asked if we could house sit and look after the tribe of cats that Carol had adopted. We knew others along with C & M that were escapees to rural France in the Loire. After we house sat, C & M kindly offered their cottage for us to experience life in rural France. It was this experience that gave us the confidence to move from fast moving Melbourne to where we live now in tranquil Trentham. We are only 1 hour from one of our sons in Melbourne. The other is in Belgium so maybe we will visit next year. (another opportunity to pop back to the Loire to renew friendships maybe).

After we sold our house in Mentone, the building process in Trentham started taking place. We rented for 12 months in the larger town of Kyneton (20 kms away from Trentham) and finally moved into our new Trentham home just prior to Christmas. The process of making the house into a home has been amazingly quick as we both love being here - the house, the village, the people and the relaxed lifestyle add to the experience.

So, lets do a little recap on the early building period which in actual building took 6 months. With the administration we had a further 6 months added so in full, it took 12 months from signing contracts to moving in.

The following photos with captions give you an insight to the process.

Rather than documenting the full process in on post, we'll save some for the next few blogs. We must say though after 3 months living in Trentham, it's all and more than we hoped for.


Thursday is Petanque day in the Trentham Town Square. Our numbers are growing as you can see by the amount of balls we have!!!! I believe we had about 12 Trenthamite Pertanquers with a few onlookers. 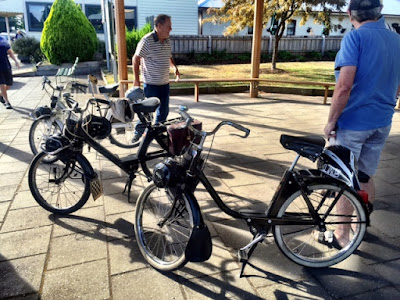 A few of us really immersed ourselves into the French flavour today by riding our VeloSolex bikes to the square this morning. 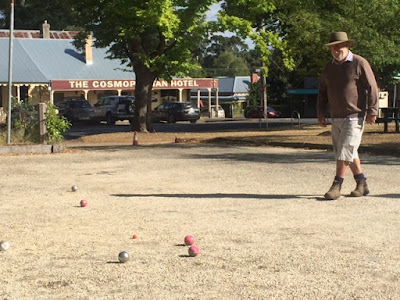 The town square is just across from the local watering hole - the Cosmopolitan Hotel.
The Cosmo in recent years has been renovated after many years of being out of service due to a fire that started in the kitchen. Today it is very popular with both tourists and locals. 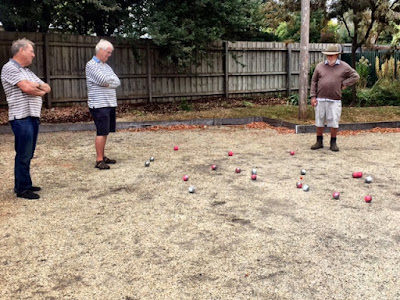 Above are three of our players contemplating  the situation. They look resplendent in their "where's Wally" shirts while "Farmer John" adjudicates the scoring.

Seriously though, we don't take ourselves very seriously and its a chance for us to get together and share a few laughs. With five cafes in town we tend to rotate around them for our after game coffee.

Email ThisBlogThis!Share to TwitterShare to FacebookShare to Pinterest
Labels: petanque

It was a mild 19 degree morning in Trentham this morning at 6.30 am.

Not bad for an autumn morning - not sure how I'll cope mid-winter when we get snow and below freezing mornings.
We have a small local group of cyclists in Trentham that I've met up with. We leave from the local Post Office corner. This morning's ride was a quick 35 km circuit that brought us back to our local cafe for coffee. Trentham is an amazing community. At 6.30 am I heard noises from our Post Office. Lizzy who runs the PO was at work sorting the morning mail. At 8.00 am when we were having coffee, she did a delivery to the owner Mel of Chaplin's Cafe - how is that for service?
While enjoying our cuppa, we had Barry, David, Greg, Tony all stopped by for a chat.
Geeez, I love this life here.

BTW, I had to go to the Melbourne CBD for a lunch with friends - so many people - so many contrasts. Suits walk briskly be homeless sitting on the side walk. It was great to meet up with my city mates for lunch but I was relieved to get back on the train to Trentham.

It's been some time that "Our Country Life" has had regular postings. This was partially due to not having internet access since moving to Trentham late December. Now that we are pretty much settled in our new house, its starting to feel like home. The process took a full twelve months with both the administration and building.

We are often asked how we chose Trentham as our place of retirement - the answer was always, "We didn't - it chose us." It must have been 2 or 3 years ago we decided to spruce up our Mentone home to sell and move from "Melbourne - Our Home by the Bay" (remember our past blog title?)
We considered many places for retirement - Launceston, Tasmania was one that attracted us. Then there was Warrnambool on the far west coast of Victoria. Both were too far from family and friends.
Then we started looking at towns no more that 1.5 hours drive from the Melbourne CBD.

During this stage, I had transitioned to a 4 day week and on my Fridays off, we would search out houses within that time frame from Melbourne. Strangely we kept driving through Trentham. We would stop for lunch or for a late afternoon glass of bubbles. We had friends who lived here so we would occasionally pop in to say hello.

One sunny spring afternoon while sitting outside our favourite wine bar in Trentham, a local couple pulled up in their C3 Citroen and being a Citroen tragic I struck up a conversation after which they joined us for a drink. Anyway after they left, we looked at each other and agreed that we both could live here. That's when house hunting became serious. A block of land came on the market and we fell in love with the existing trees, the size of the block (not too big, yet not too small) and the fact that it had crown land behind it which also had a small creek.

The thought of building a modern home to suit the climatic conditions of Victoria's Central Highlands seemed an obvious choice. We'll explain more on subsequent posts.

So! Our Country Life now changes to TRENTHAM TALES. It will bring you stories of the local history, the surrounding scenery, eating and drinking establishments, festivals and just the local lifestyle of this small and magical village of Trentham.