It's always a traumatic moment when trying to achieve an "out of comfort zone moment". Today there were three in the first half of the day.
The first "OCZM" was purchasing a Italian SIM card for our iPhone. After navigating the language barrier and having the Sim card fitted, we found that our iPhones were locked to OPTUS in Australia. The end result was that we now have a Samsung phone.

The second "OCZM" was picking up the lease car. I was actually quite excited with the prospect of sitting my posterior in the driver's seat of a brand new Citroen C4 1.6l five speed diesel. The base model 2014 C4 has great features including retracting mirrors, auto lights and wipers, bluetooth, and connection to iPod plus the crowning glory of GPS.
Why was this a OCZM? Well, because when I opened the door to get in, there was no steering wheel. I looked across at the passenger side and there it was - OMG!!!!
That's right - they drive on the other side. 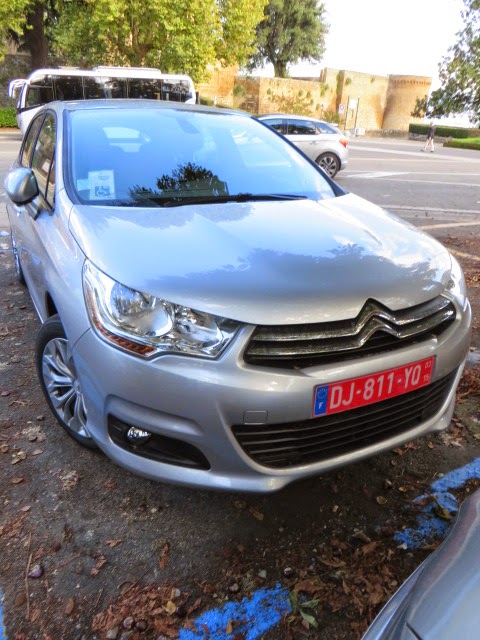 The third OCZM was getting fuel as they only give you a token amount to get to a service station. Sooner than later is always a good rule with filling up in unfamiliar territory. So we decided we would go to the first filling station. This I found not far from entering the A1 Freeway that takes you all the way from sud (south) to Nord (north) of Italy. This down in the tooth service station even had someone actually filling up the car for you. I found out why - it only took cash and the "bloke" wouldn't fill up the car unless you gave him a tip. I said to Sue, "I think there is some sort of a error, we'll just move on and fill up elsewhere". That's not exactly what I said but I guess you get my drift. We left Mr Dodgy with a perplexed look on his face.

So off we went up the A1 to our next night stay at Orvieto in Umbria. As you drive up the A1, you notice that either side is littered with hilltop villages. Orvieto is one of them.

We had a spare night before arriving at Gaiole and Orvieto was half way. We stayed at the base of the ancient city of Orvieto and although you could take a Funiculare to the city, we decided to drive the 4 kms to the top.

We only spent a couple of hours in the historic part of Orvieto before rushing back to the metered car park with the intention of returning tomorrow for a more sedate look and lunch. 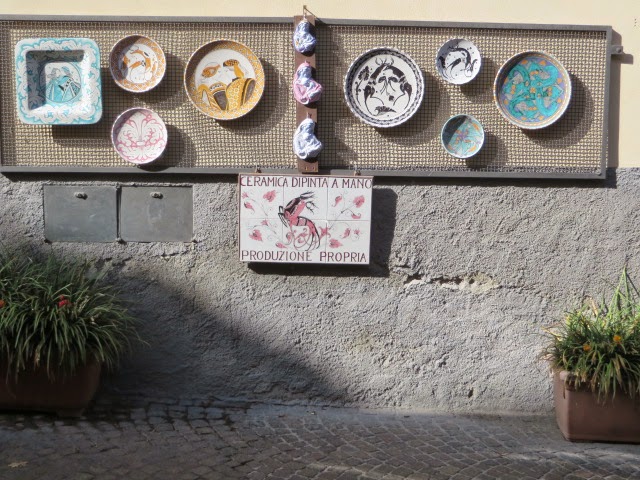 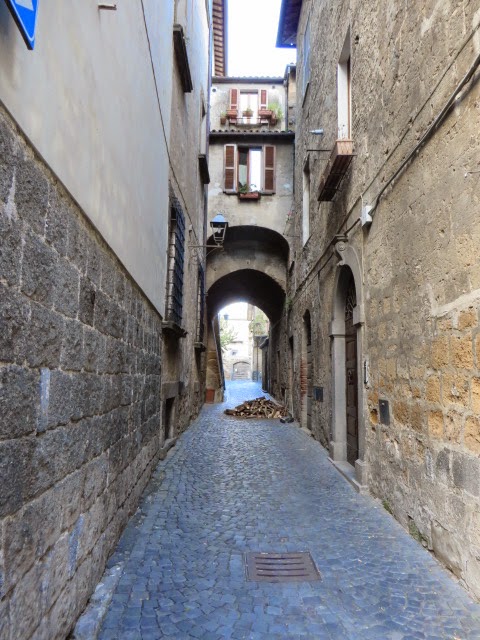 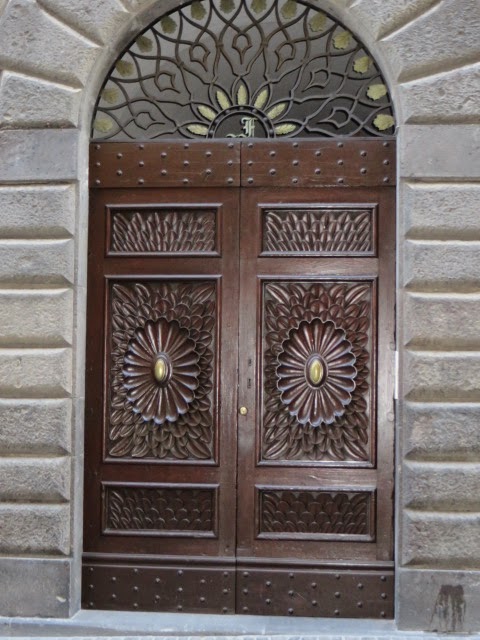 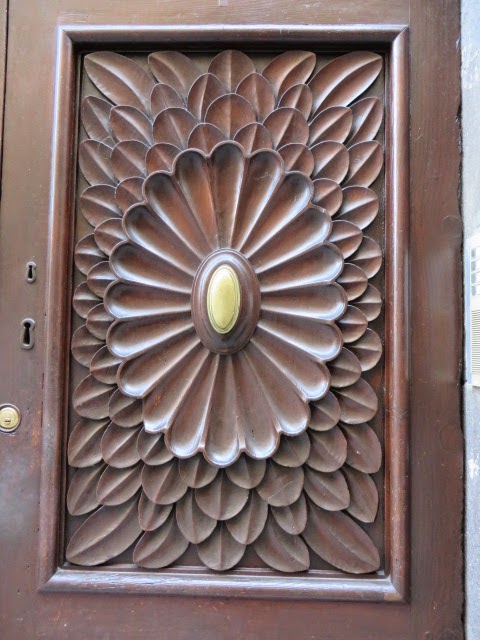 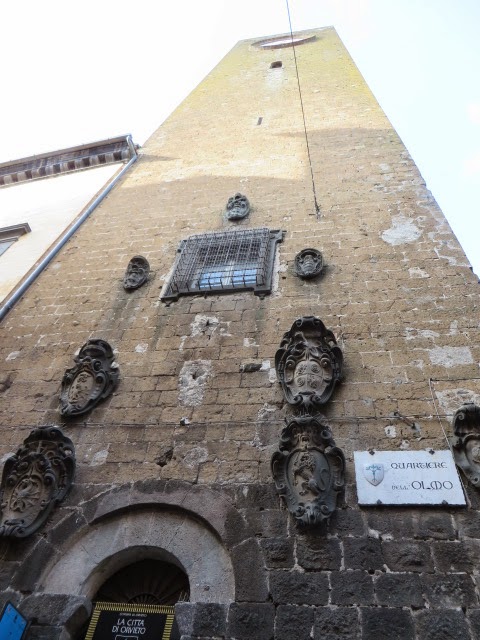 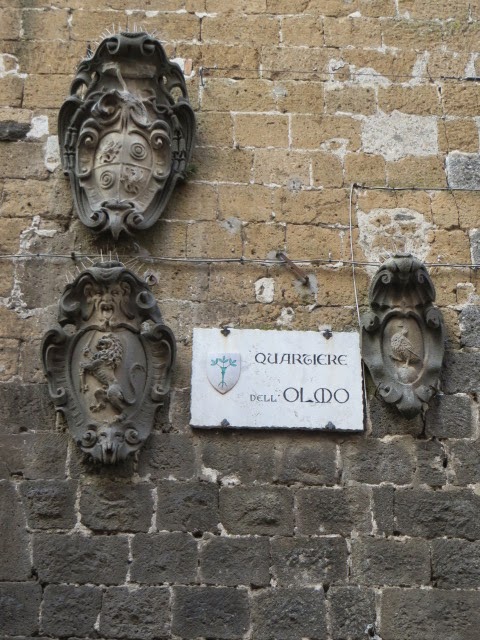 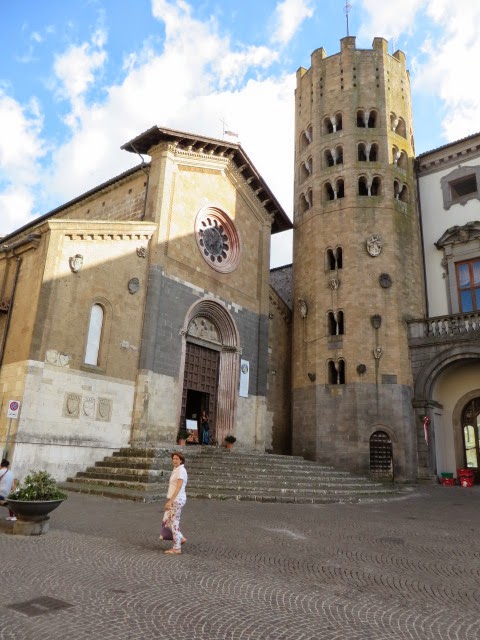 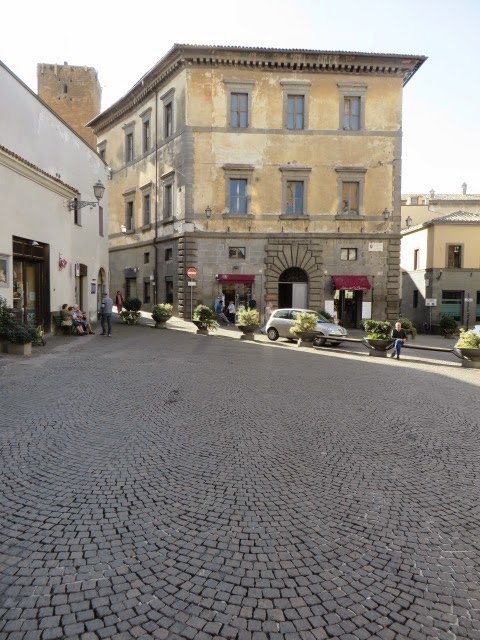 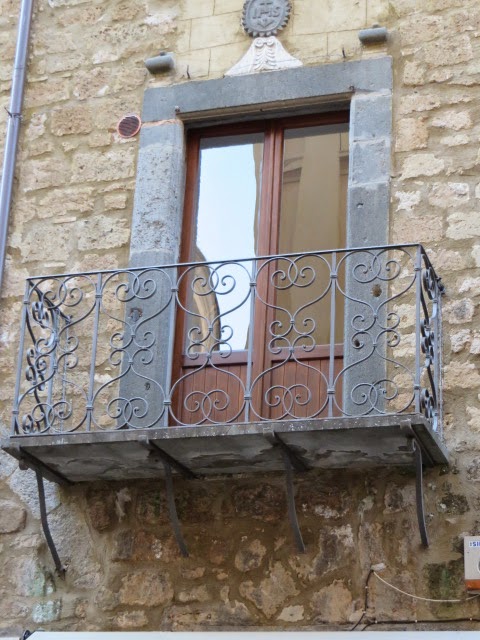 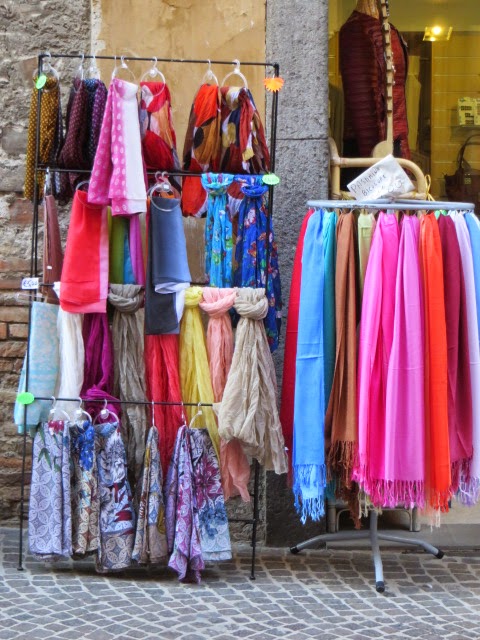 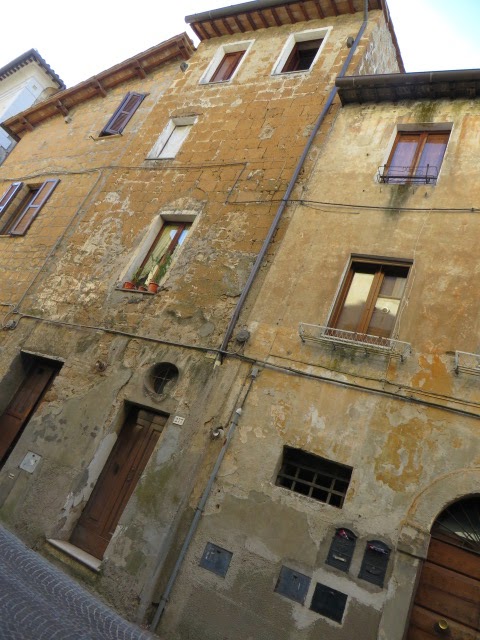 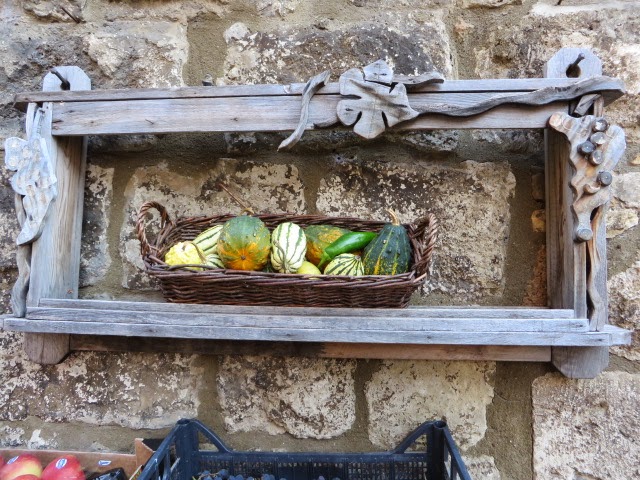 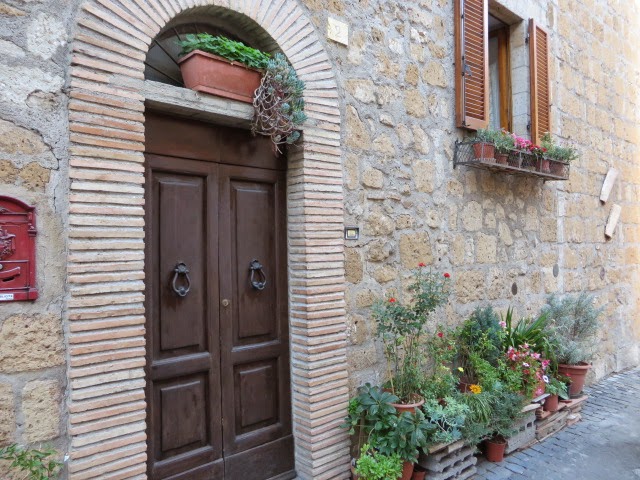 Last night's dinner was at a family restaurant walking distance just down the hill from the hotel. Just as well because parking is very limited in the narrow streets. No wonder European cars are designed with retractable side mirrors. The restaurant had a menu with locals in mind rather than tourists and this is the way we like it. The large screen TV was showing "Deal or no Deal" or something like it. It had the slick, slightly overweight host with the cute model like girls - eh! That's Italian TV. 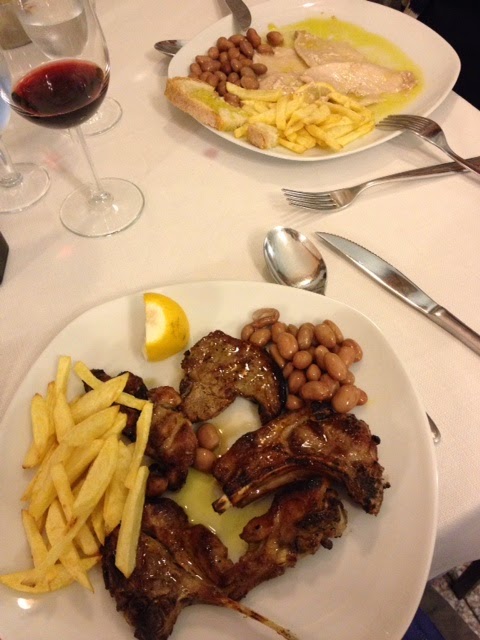 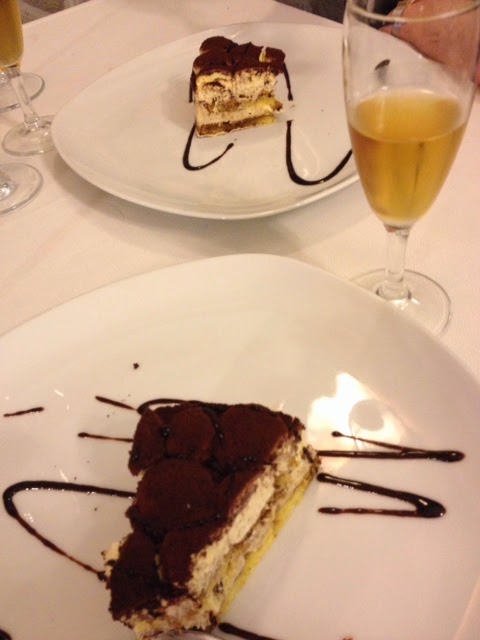 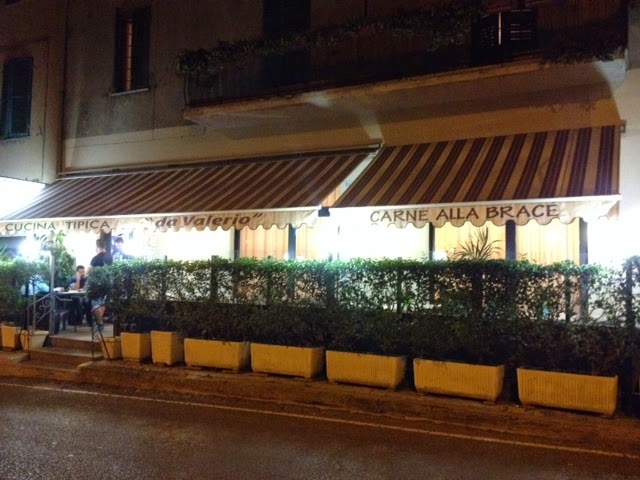 The menu was simple good wholesome food, mine being grilled lamb and Sue had the scaloppini al limone with desert being Tiramisu which Sue said was the best that she has ever had. Our host poured us a complimentary glass of desert wine to accompany it. Superb.

We are now in Italy - Fiumicino actually.

After two years of saving and planning, we are now here in Italy. The flight is a form of torture in Sue's mind and I would probably agree to some extent. Economy class on a plane for the duration 31 hours from our front door to the hotel door in Fiumicino is not the most pleasant experience. It reminds me of those livestock trucks taking sheep or cattle to slaughter. Having said that, Singapore Airlines make the trip as pleasant as possible with great smiling service all the way.

Rather than going into Rome (we've been before) we decided on staying at Fiumicino which is only 15 minutes from the airport. After flying from Australia, an overnight stay here is highly recommended. We stayed at Domus Lina, a well appointed guest hotel with host Enrico being most helpful - always cheerful and happy to chat and offer advice.

Fiumicino is on the outlet of the Tiber river and is known as a fishing village. We were here in 2006 to visit the ruins of Ostia Antica, an ancient port for Rome. The ruins are said to rival those of Pompeii. Not having seen Pompeii, I can't confirm this but Ostia Antica amazed us. Check it out via this link, http://www.ostia-antica.org


The trip from Aeroporto Leonardo da Vinci was hassle free with Roberto our driver holding a sign up with our names on it. He took our gear and loaded it on the Lancia people mover. As we drove off to the hotel, he started crooning "That's Amore" and when he unloaded my bike bag, he broke into Queen's song, "I want to ride my bicycle".

Have to say the hotel we are staying at for the first night is a delight and our host Enrico has already been most helpful with a recommendation for dinner tonight that takes in the local seafood produce. More on that later as I'm writing this after our initial stroll to explore our surroundings.


Still very much jet lagged and out of time-sync, we found ourselves enjoying a beer and sharing a procuitto and cheese panini at 11.30 am at a small cafe overlooking the Tiber River. The cost was a mere 8.50 euro or approx AUD$10 for the two of us. It's was a sunny 25 degrees when we took shade under the coolness of a peppercorn tree to watching the passing locals. People were riding their bikes, walking dogs and generally enjoying a family Sunday.

We retired to our hotel room around 2ish with Sue taking a nap (for 5 hours) and me a little later. Both of us had one of those deep sleeps that you need after a long haul flight. We were both looking forward to experiencing our first evening meal in Italy and we were not disappointed. This is where I let Sue take over because she is so much better describing food and flavours much better than moi.


Sue and I are sitting on the balcony of our hotel on a balmy 24 degree night after dinner, listening to the constant chatter of people walking by - the occasional cry from a baby being nursed by it's mother  contrasts with the street talk of teenagers. We also hear the clatter of diesel powered small cars that are so unfamiliar in the streets of "Melbourne - Our Home by the Bay". It's time to go to bed to meet the challenges of another day in a country where we are the strangers trying to be understood,

It seems that "MELBOURNE - OUR HOME on the BAY" may not fit that well with our 10 weeks in Italy and France. I may need to find another heading, any ideas?

We leave on Saturday for Rome with our first full week in Gaiole, Chianti with my cycling buddies for the annual retro event, L'Eroica. Its a one day event on old bikes in the rolling hills on both sealed and unsealed roads - the Strada Bianca or white gravel roads. Our bikes must be pre-1987 which is not a problem as my early days of racing were on these and I still have mine from the 80s. A few of the crew are already, enjoying the life in Italy, Austria and Malta before we meet up soon in Gaiole.

From Spring to Autumn

Here in Melbourne, Our Home by the Bay, we are organising the house with weeding, mowing lawns, tidying up generally for our ten weeks in Italy and France. All of a sudden, spring crept up without warning. Workdays lately have been long and I tend to leave early and get home around 7ish so I don't really look about outside much. With the impending holiday, a bit of yard maintenance was required this weekend.

It's the first time that I discovered all the new growth and colour - but it wasn't until late Sunday afternoon that I took my iPhone out of my pocket to take these photos before we lost too much light. 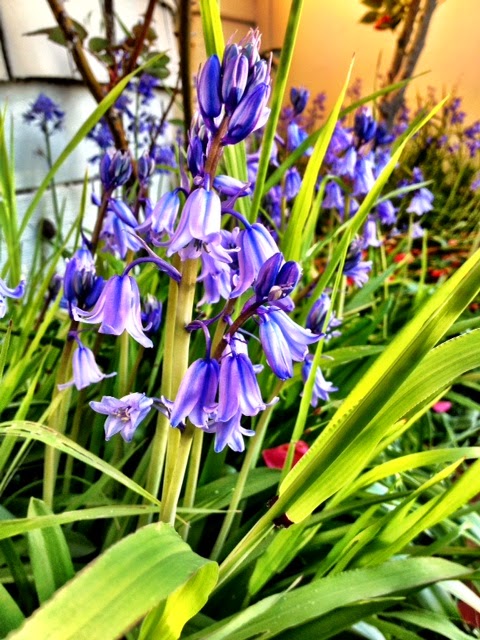 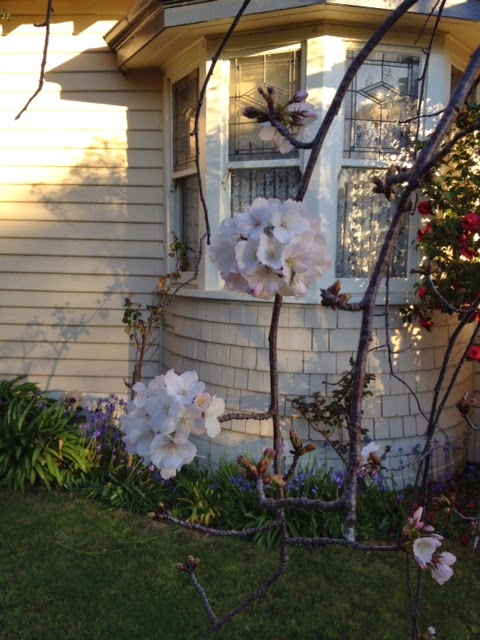 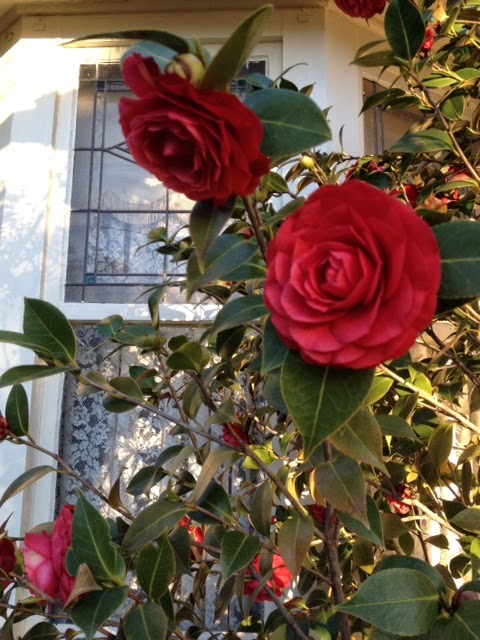 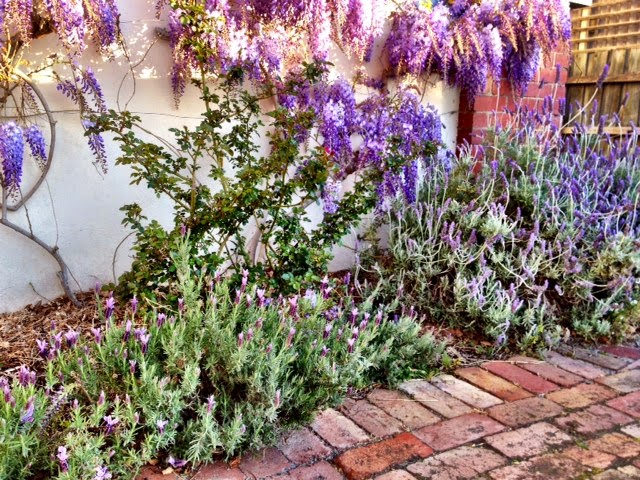 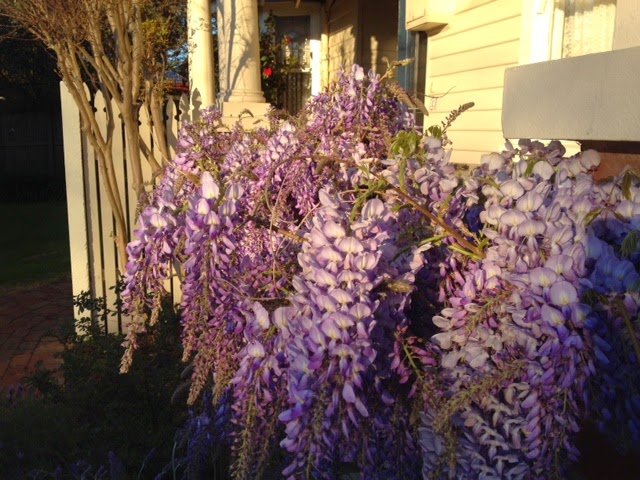 We leave for Rome next Saturday for Europe's autumn and previously we have loved that time but this trip takes us into winter with our last week - the first week of December in Paris. It will be a new experience.

This trip is centred around a Retro Bike Event in Chianti, Italy for the first week. We then spend some time after in the lakes district before wandering across to the Loire to experience some time living in the region.
Sue not that long ago toyed with the idea of living in France for 3 months. We discussed this over the dinner table with friends in the Loire in 2012. It was at their very kind invitation that they suggested that we house sit while they take a holiday themselves. Its an experience that we are so grateful to accept. Six more sleeps before we fly out.

Email ThisBlogThis!Share to TwitterShare to FacebookShare to Pinterest
Labels: spring

The title is mine, not Sue's.
She often says that she doesn't have a creative flair
but when it comes to cooking,
we all agree,
her creative passion of food
amazes this family. 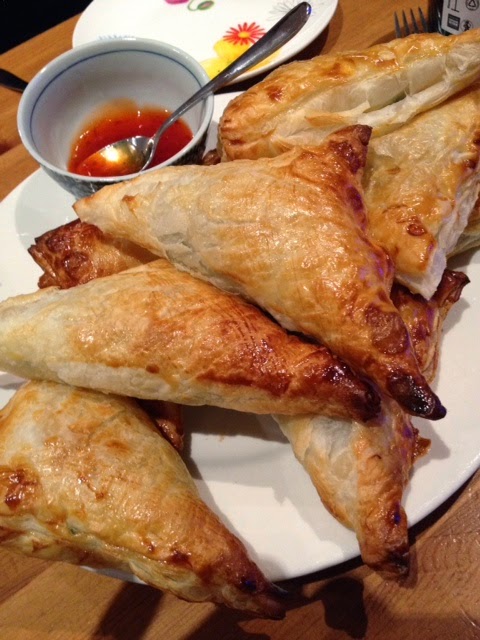 It was an entree sized dish so I made quick spinach and feta pastry things with sweet chilli dipping sauce to have after. Probably not the best match if you were making a total menu to all blend.
But hey, we were just making dinner! All good.
So now we've tasted haggis, and while I didn't hate it, it wasn't anything I would choose to have again.
Sorry Scotland.

Well the weekend is over and with only two weeks before we fly out to Italy, I still have much work to complete with both home and place of employment. I'm still painting inside the house and cleaning up outside.
I've been a little distracted with the Blog due to all of this but there'll be lots to come once we leave Melbourne for Italy and France. With 10 weeks I'm sure we'll find something everyday to post.
I think we may just be "Living the Life" and taking in what life has to offer. Stay tuned.

In the meantime, here's some historic photos of our hometown, Mentone. All of these photos have something in common. The buildings no longer exist.