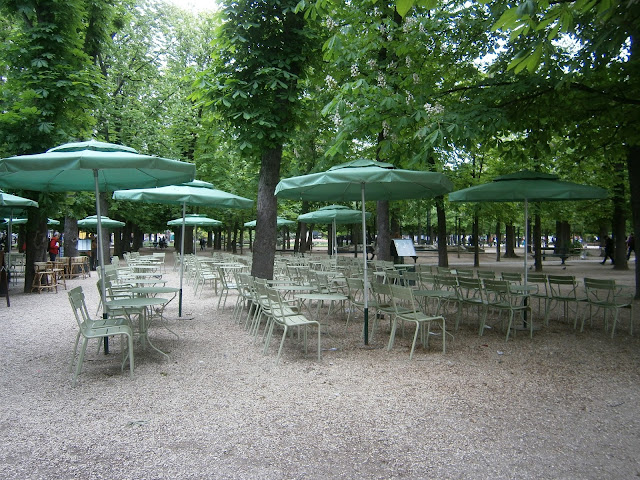 We've enjoyed six visits to Paris since 2006 - it's been our starting and finishing points to our travels in France. We are saddened by the recent events in the city of light (and Love). There are no words to express our emotions. Our thoughts go out to all our friends in France.
Posted by Leon Sims at 7:05 PM No comments:

We are Homeless Millionaires

Well its now all over and we can stop boring you with our home renovations. The Auction was on Saturday at 1.30 pm and 15 mins later it went under the hammer. Next thing we know our auctioneer had exceeded our reserve price by 20%. This makes our plans for retirement very doable. 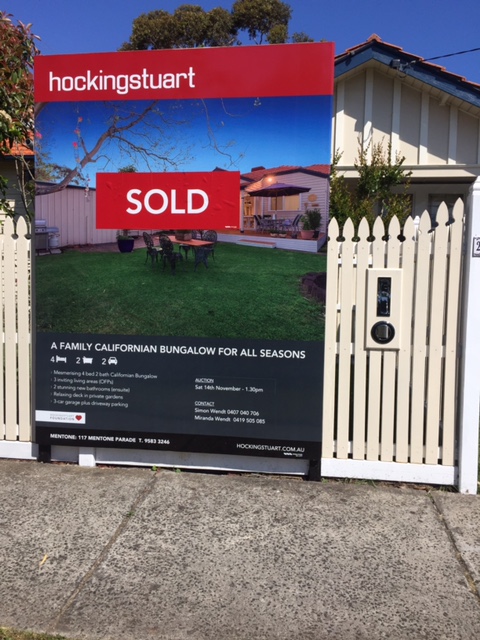 It was quite a few stressful days of pondering over the various scenarios. What would it sell for, how much will we have available to build, and how much can we put away with our current retirement funds. Now we can relax and plan for the future.

The really nice thing is that the new owners are just like us when we made this house, our home. They are a young couple (30 somethings) with two primary school children. I'm sure they will breath new life into this home using their own personality.


Scenes from an Auction 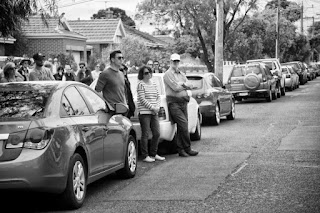 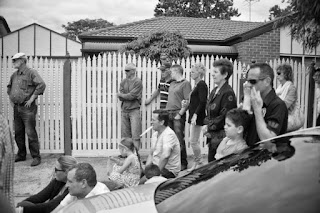 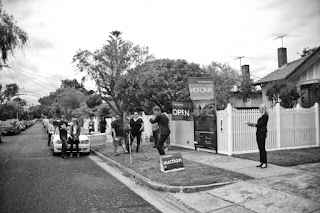 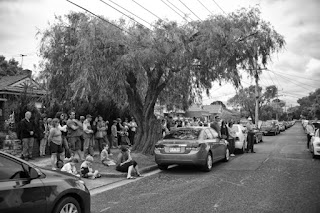 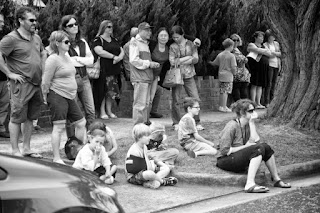 All these B&W pics taken by our good friend Ell - Photographer of note.
One of the many friends that lent their support in labor and moral support over the many months to have our home ready for this Saturday's auction.
Posted by Leon Sims at 9:51 PM 13 comments:

The House Saga draws to an end Tomorrow. 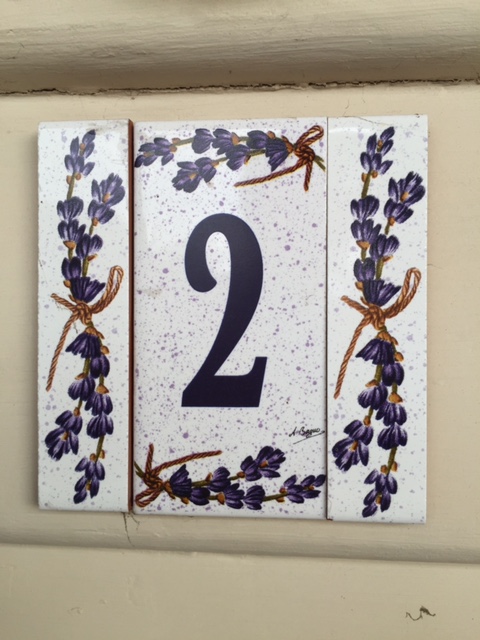 At 1.30 pm Melbourne time, No.2 Tolls Avenue Mentone will be in Auction mode.
Someone else will eventually get the keys to our home of 33 years.
We hope that they get as much joy as we have.

Friday we took a visit to Trentham to see a builder and to wander around our plot of land. Our meeting was at 11.00 am at the local "Red Beard Bakery" which is situated down a small walkway. Sue loves their bread and is willing to spend what they ask for their artisan product.


After the meeting with the builder, we now know that we need to interview many more possible builders before deciding who will best suit us and our budget. We took a drive to the block to see what trees might need to be removed and then took a short walk to the creek that runs at the back of the council reserve that we back on to. It's so peaceful. The creek is known as Trent Creek and people use it for a relaxing route to the main street that runs through to the village centre.
On our short walk we met the local duck family - once we move in, Sue suggested that the local duck population may just dwindle. She loves cooking duck. 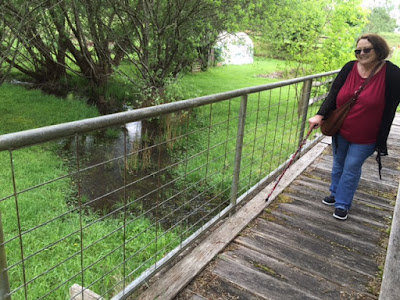 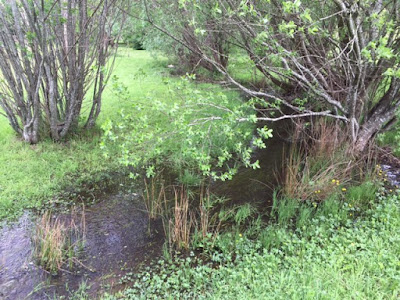 Normally we have lunch at the Plough Hotel which has an excellent menu, service and ambiance. This time we thought we would give the Cosmopolitan Hotel a chance. They are two entirely different establishments. The Plough brings a bit of city cuisine to Trentham where the Cosmo is good old fashion Aussie pub food in a real country atmosphere. They both have their place in Trentham and its good that being so different to each other, they really don't compete within the same market. 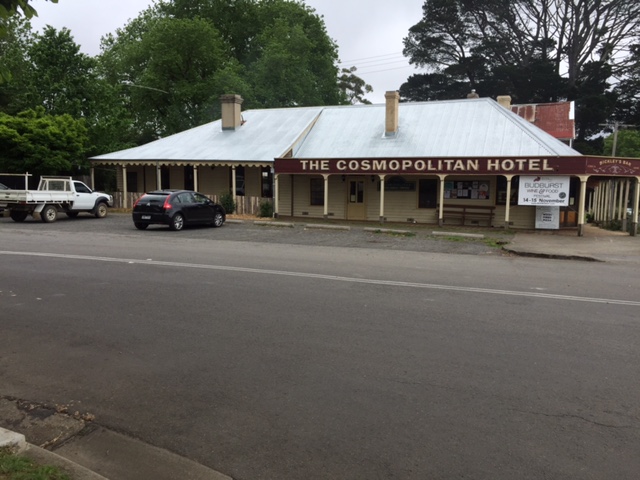 A stroll down the main street took us into the small shops that cater both for the tourism and local crowd. There was a great eclectic shop selling all manner of gift ware, clothing, furniture and so many unrelated items that it took your eye through the many corridors and rooms with wonderment. Sue bought a set of five huge metal keys to hang on our wall at home.

The next shop was a book shop that would rival any other in Melbourne. Dr B's Bookstore (Brenda) runs creative writing workshops as well and told us that they are now building their home in Trentham by the straw bale method. 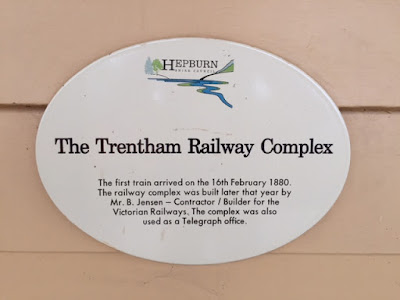 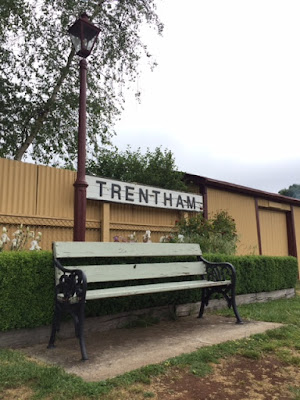 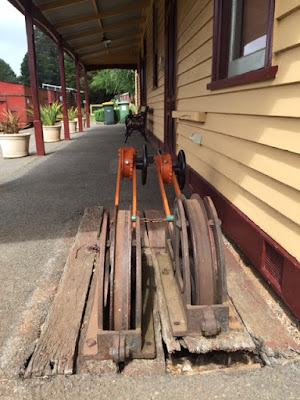 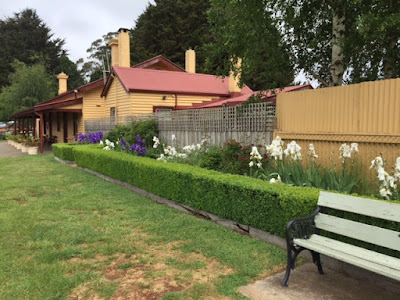 By this time we were coming to the end of our day in Trentham when Sue said that we have never visited the Trentham Railway Station which along with the Trentham Falls (a future post) is one of the tourist attractions of Trentham. So we took a drive to the station before heading back home to Melbourne. The drive to the edge of Melbourne CBD takes not much more than 1 hour with a speed limit of 110 kph - its once you hit the CBD and continue on to Mentone, "Our Home by the Bay" that you compete with the rest of the automobile fixated population. It takes almost the same time in peak hour(s) traffic from Melbourne CBD to home.


Trentham is becoming more familiar and comfortable to us with each visit.
Its a nice place to be.

Email ThisBlogThis!Share to TwitterShare to FacebookShare to Pinterest
Labels: Trentham

What Was is No More

Its come to the end of October. This time last year we were floating around Italy and France having just completed riding the L'Eroica cycling event in Chianti. This year we find ourselves in another exciting situation as we draw closer to the auction date of the sale of our house - November 14.

As I write this post, we are about to have our third open house inspection. After the first two, we've had a total of 36 inspections (some would have be neighbours) with 3 repeat inspections, 4 expressions of interest and 9 requests for section 32s. The activity looks promising however you can't help feeling anxious. We'll know more with another three open for inspection days to go. 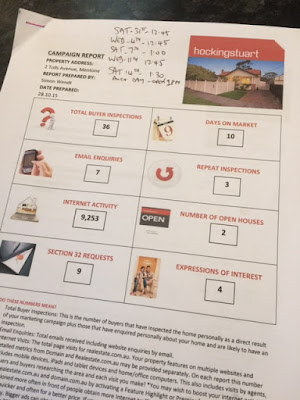 It was 33 years ago that we walked into this house and knew it was for us. We were married in the backyard, surrounded by close friends and family. Three kids grew up in the house. Pets are buried on the property.

Melbourne - Our Home by the Bay will possibly cease to exist as we know it. Mentone will become a distant memory once sold. The bay will be replaced by trees, fields, forests and hills. Our pets will be the animals and birds of the bush.

We have been asked if we'll be sad to move on after all the work we've put into the house - maybe a little but this is softened by the exciting prospect to the next stage of our future.


PS: Another 19 groups came thru Saturday with two groups for their second visit - Hmmm, what should we think?
Posted by Leon Sims at 10:03 AM 13 comments: