It seems like we never went away - work and home maintenance are taking up all my time so Sue is taking over for this post.

BUT, just before she does take over, We've started coming back to Chardonnays. We bought two from two different regions of Australia. One was from Margaret River in Western Australia, the other was closer to home from Brown Brothers in northern Victoria. Sue has been a Sauvignon Blanc fan in the past but we tried a few French Chardies on our visit this year and it opened our eyes again to this varietal.

I have to say that I thought about this post after we received an email from a friend in France asking what was happening with the blog.
The answer of course, was not much.
Then another blog by a friend of ours, also in France showed us the yummy looking steak they had for his birthday dinner.
We have had very little success buying steak in France. Both in restaurants and buying to cook at our French houses. With one or two restaurant exceptions,  in six trips the meat we end up with is usually tough and/or not overly flavourful. Much of this, I am sure is due to my inadequacy with the language....but....on our last trip I found a nice, semi English speaking butcher and explained exactly what I was after. I ended up with a piece of skirt steak that was tough and yeh, yeh, yeh. Thats it!
For those not aware, meat in France is not cut the same as meat in Australia. Also, the meat is usually cut to order.
So I can't ask for a porterhouse or point to something I recognise in the showcase. I do have a wonderful book showing all the french cuts, but it weighs about 7 tonnes (minor and slight exaggeration) and is a little heavy to travel with!
As an aside, I must say that the poultry is sublime in variety and quality and I wish I could as easily buy the same here.
Anyhow, seeing the delicious steak of our friend and reading some of his following comments prompted this.
I thought I would show you an Australian steak. 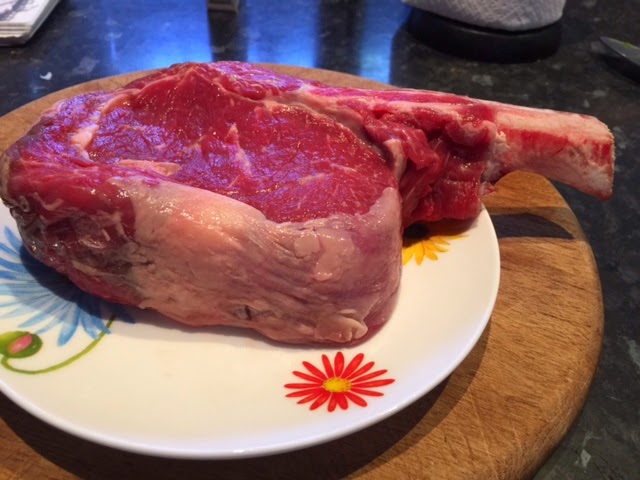 This is a rib eye steak. It is grass fed, which is my preference. Although I am sure Leon would eat it by himself I don't want him to fall into a food coma, so we do it the Italian way and put it on a wooden platter to share. It weighed about 600grams. 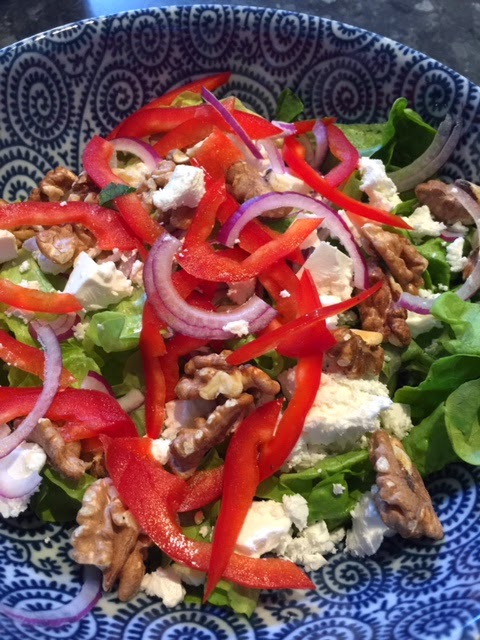 So, that's an Australian take on steak for a casual at home dinner. The rib eye cost about $22kg at a local butcher. It can vary wildly in price. Next time we're in France I'm taking a couple of  friends shopping with me. Gentlemen be warned....you know who you are.
Posted by Leon Sims at 12:41 PM 8 comments:

Email ThisBlogThis!Share to TwitterShare to FacebookShare to Pinterest
Labels: cooking

Its a sunny weekend and rather than meeting up with friends for some cycling, my (our) interests are turning to working on the house. We hope to put it on the market in September next year. With this really nice weather, we are concentrating on the outdoor projects.


Since getting back to work after our 10 weeks in Italy and France, I have to admit that my motivation needs a bit of prodding. Having said that, we close for the festive season and resume work on January 5 and Sue has found me a project and is offering that motivation stimulation (prodding).


Before I turned 50, I built and out door deck extention before the party to accomodate our guests. It was a great party. 10 years later for my 60th, Sue took me to Paris. Another 5 years on and the deck has endured 15 years of seasons and is looking decidedly in need of rejuvenating. A bit like myself maybe.

Last weekend was the demolition and this weekend is the beginning of the rebuilding process. The concrete stumps are fine and so are most of the bearers but the joists and of course the decking floor has to be totally replaced. I'm using Merbau timber for the deck floor in a width of 140 mm. You can get either 140 or 90 mm width but I thought the 140 mm would be faster to work with and add increased strength and look more substantial.
Sue enjoys entertaining outdoors in the Melbourne summer so although we have no deck at this time, she went and put in a winning bid on EBAY for an outdoor setting. It currently sits under the Jacaranda tree which is in full bloom.

Hang on one moment, Sue is calling me. OK, I have to go now - SWMBO (she who must be obeyed) says I have to get back to work on the deck. Stay tuned.
Posted by Leon Sims at 9:09 AM 4 comments:

May I just leave you with one or two photos of our 10 weeks in Italy and France. We returned home on Sunday and I returned to work on Monday, very much jet lagged, I wake at 4 in the morning and at 3, my head drops on the office desk. Then I drive home from the office to have a nap before dinner.
Why is Australia so far from France. And also SO expensive to get there, did I forget also how uncomfortable while sitting in a tin can for what amounts to one whole day. Still the movies although forgettable, were entertaining.

Having complained about the time and discomfort of getting there and returning back home, it is always worth the effort to visit such a wonderful country and meeting up with old friends (you know who you are) and making new ones.

We consider ourselves most fortunate to have been welcomed by our fellow Bloggers in the Loire et Cher region, and especially a special couple who gave us the opportunity to live in the local area for an extended period. Without their genorosity, it would not have been possible. (they know who they are).....

Anyway here's a few of my favorite photos around the region where we stayed in Thenay. 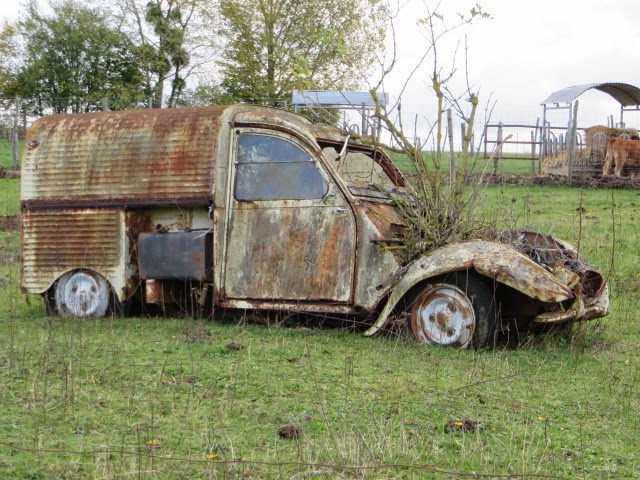 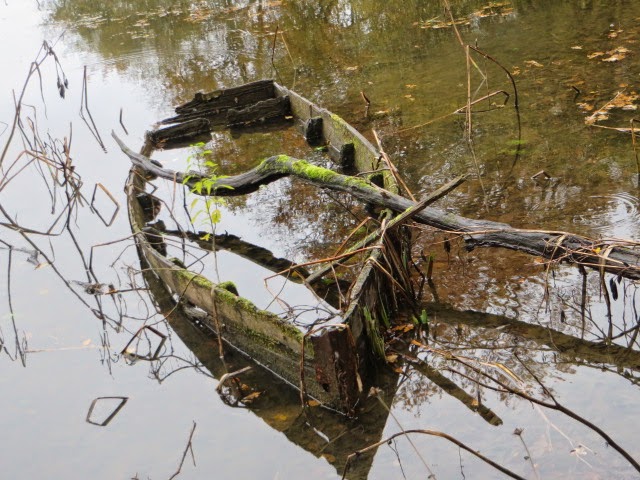 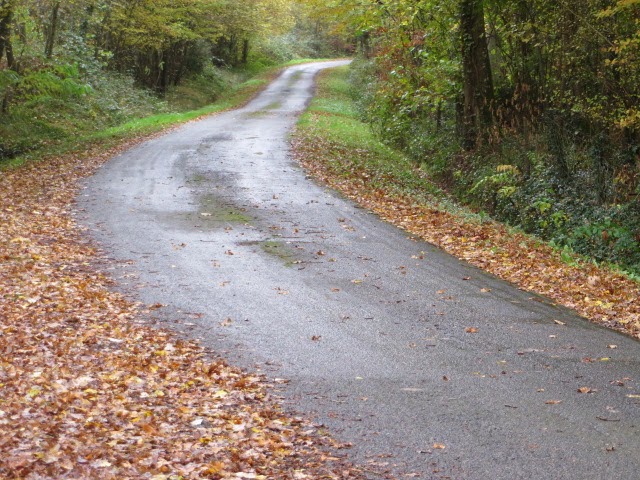 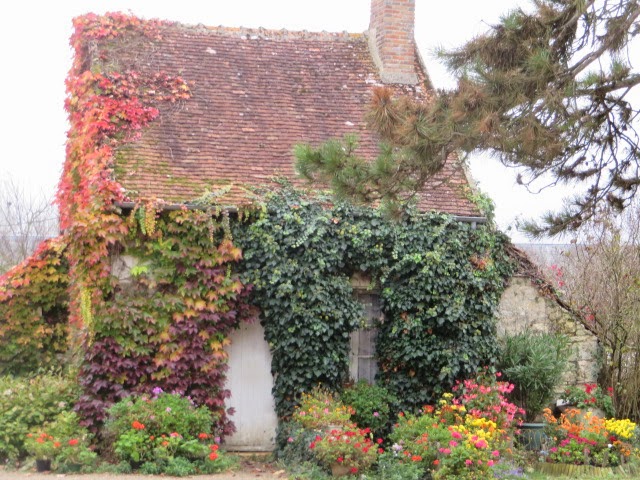 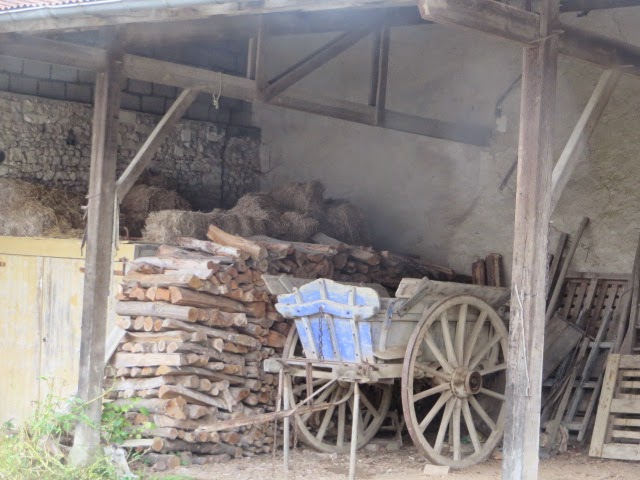 Richelieu - an intriguing past

Richelieu, like Chinon is a village that we seem to be drawn back to on each visit to the Loire. We think we might know the reason after this visit. It's not that Richelieu is a vibrant village - in fact quite the opposite. With each visit it seems to have familiar shops and businesses now closed. The houses seem a little neglected and yet the history of the village, like Chinon is fascinating.
Chinon has King Henry of England, Eleanor of Aquitaine, Richard the Lionheart and Jeanne d'Arc as part of its history and Richelieu of course has the Cardinal.

The great thing about travel and Blogging is that it opens your eyes to further knowledge. While writing this post, I started researching the Cardinal's history - all too much to relate here but I would suggest you delve into his life. He was one of the most powerful men of his era in French history. 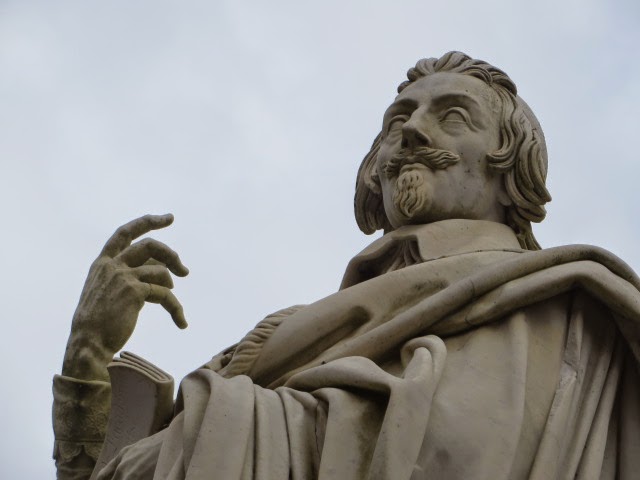 I found this quote amongst many by the Cardinal on the internet which I guess gives some insight to his character.
"If you give me six lines written by the hand of the most honest of men, I will find something in them which will hang him."

One of the reasons we wanted to return to Richelieu was to see the newly restored Market Halle and it also just happened to be market day at the time. We read a blog "Eminence Rouge" which is based on both the village and the Cardinal - http://richelieu-eminencerouge.blogspot.fr
You may find it interesting as it gives both history and also daily life of the village.

In process of the Cardinal building his "Ideal City" of the 17th century, building materials were brought from other fortresses and castles such as Chinon and a castle owned by Gaston d'Orleans at Champigny-sur-Veude. The castle originally built (1499) was acquired by the Cardinal and demolished (1635) in the process except for one section of the wall. The church, Sainte Chapelle remains as well.  In 1656, the land was returned and another chateau built which stands today. We travelled by the village on a previous trip and again this time. 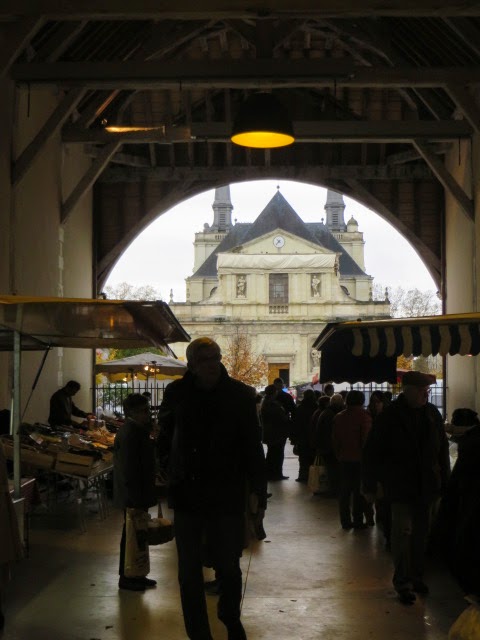 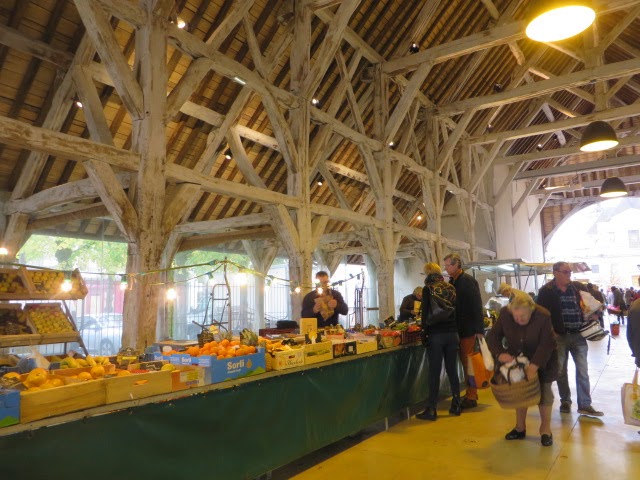 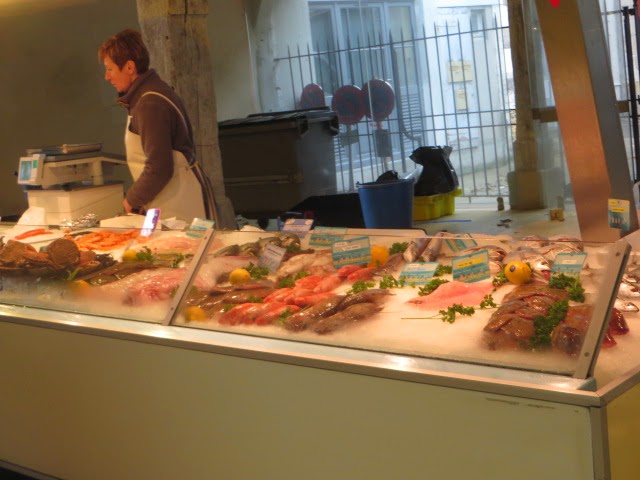 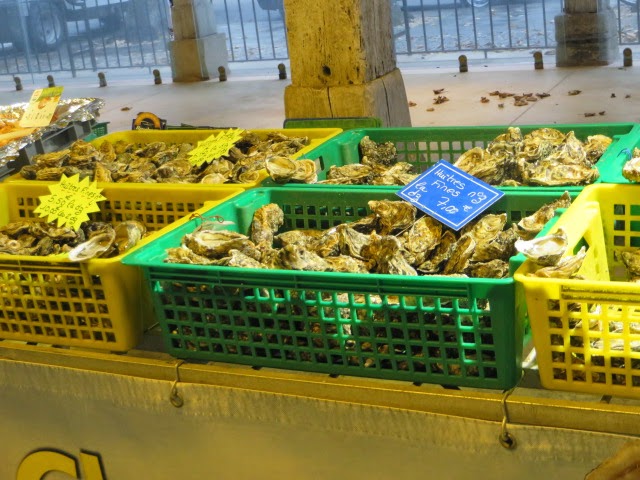 So we say goodbye to Richelieu and like Chinon, we wonder if we will ever have the opportunity to return in the future, yet they remain as travel memories - don't they.
Posted by Leon Sims at 10:29 PM 2 comments:

Chateauvieux is just a small village upstream on the Cher river from Saint Aignan. It was another discovery on one of those many rides in the Loire et Cher region. As you drive towards the village, there is nothing to indicate that a chateau exists until you look up the side of an enormously steep cliff face to your left.

We are coming to a close of our photo stories of the Loire et Cher region but there may just be a back log of photos that will keep "Wednesdays in France" going for some time.
Posted by Leon Sims at 8:55 AM 5 comments:

By coincidence prior to leaving on a previous trip to France, I wandered into a book shop and purchased a book on the clearance counter about a little village in the Loire Valley called Pontlevoy. On that trip, maybe 2008, we discovered that the village was only 2 kms down the road from our rented cottage at Thenay.The book featured photos from the early part of the 1900s by a local amateur photographer and business person. Louis Clergeau's many photos are mounted on the walls of buildings, showing how they once were when Ponlevoy was a thriving village. Today it is rather sleepy as many of the villages are today. With only approx 1500 population it tries to sustain two restaurants, a few cafes, an excellent patisserie and Boulanger where we enjoyed breakfast on a couple of occasions. It does have a small supermarket that we never discovered. I'm sure there is much more commercial businesses behind the many walls in the back streets. The mounted photos around the village take you on a museum walk of which we did on a previous visit. 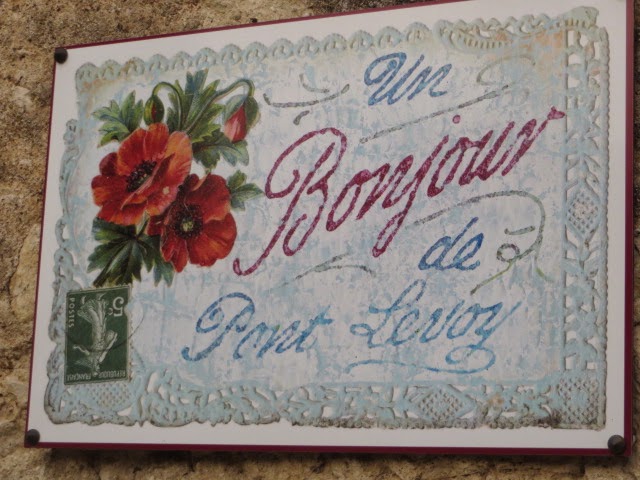 The Abbey was founded by a knight, Gelduin Charmont in 1034. The local folklore is documented on Wikipedia here;
"It is believed that Gelduin's boat was caught in a storm on the way back from a Crusade in the Holy Land. He prayed to the Virgin for help, promising to build Her a church in Pontlevoy, which he held as a vassal of the Count of Blois. Allegedly, the Virgin dressed in white, appeared above the rolling deck and calmed the sea.
Geldiun endowed the abbey with enough revenue for Benedictine monks to build a huge church, dedicated to the White Virgin. From the east, it looks like a complete Gothic cathedral with flying buttresses and trefoil stone tracery in the windows of the radiating chapels." 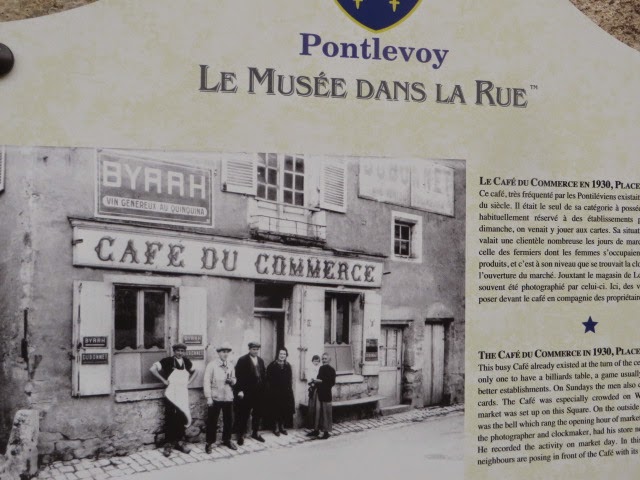 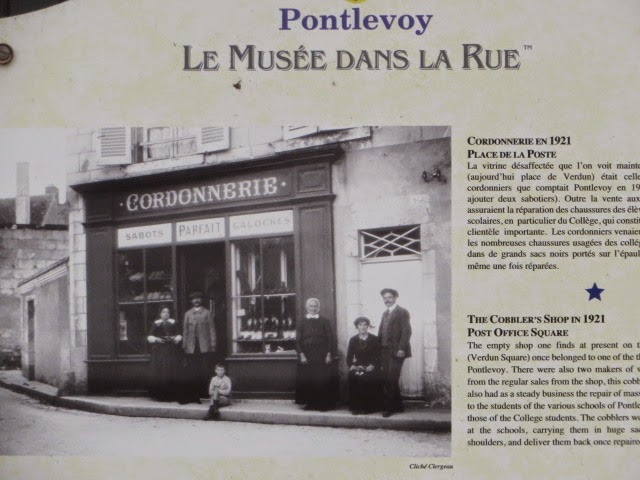 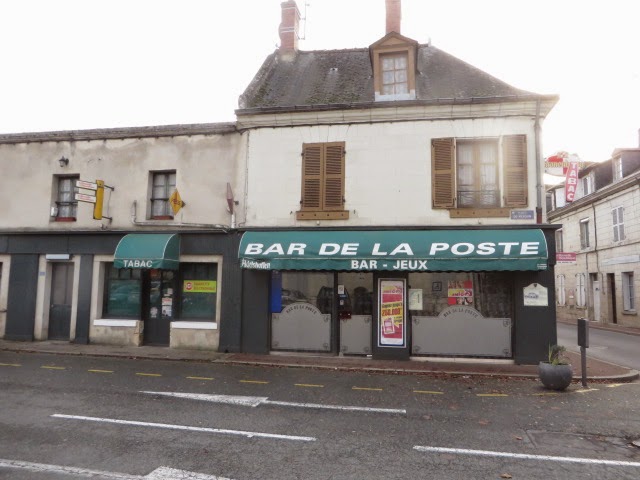 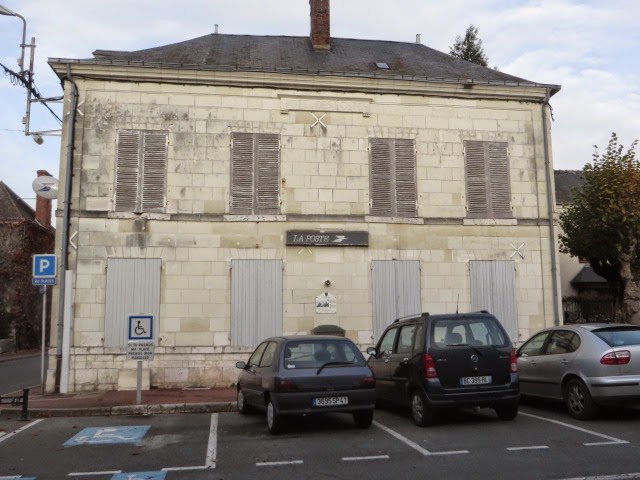 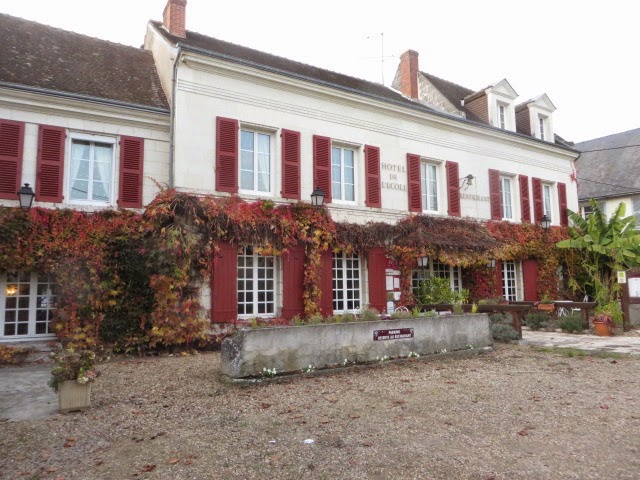 It's a little sad to have seen what Pontlevoy once was, but I guess with little interest from the young to stay in rural France, these villages remain the home of older locals, retirees from various countries looking for a more quiet and less costly lifestyle.
I hope you've enjoyed our very small walk around Pontlevoy. There really so much to discover in the streets behind the main highway that quickly passes by. You may just have to put a visit to Pontlevoy on your list if you visit the Loire et Cher region.