Just another Saturday Market in the Loire

It’s been an amazing day (Saturday), I really don’t know how we fit so many things into one day.
It started out as a visit to the Saint Aignan market. We arrived around 9ish without having breakfast. We like to buy some delicacies from a patisserie and then find a bar to order a coffee and watch the world go by. I took Sue to the same bar where I enjoyed my arvo Pelforth Blonde the other day after my bike ride. The lady who runs the bar remembered me and was really nice. I think we should come back while we are here. 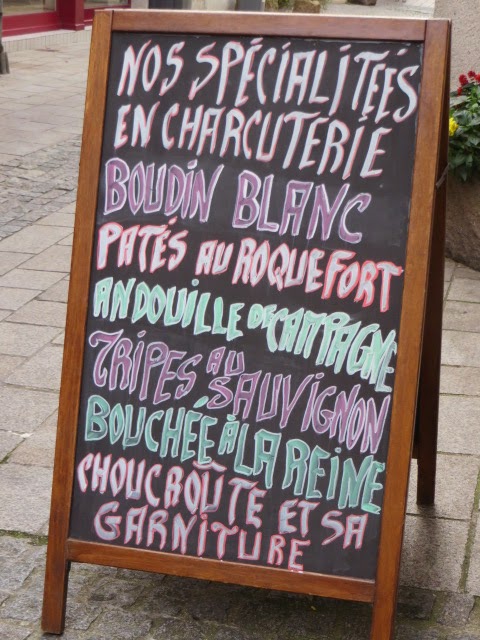 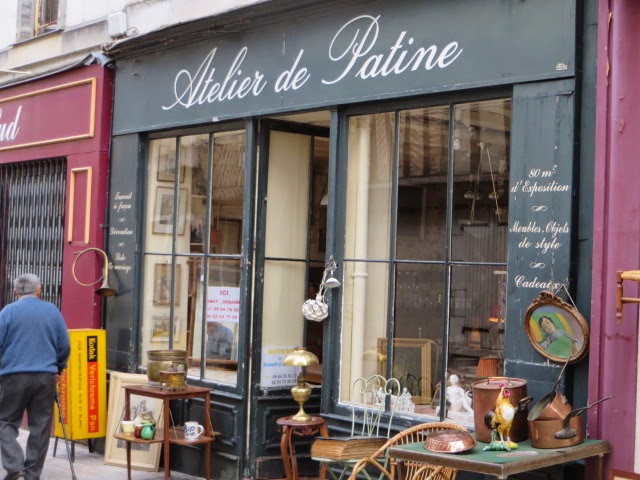 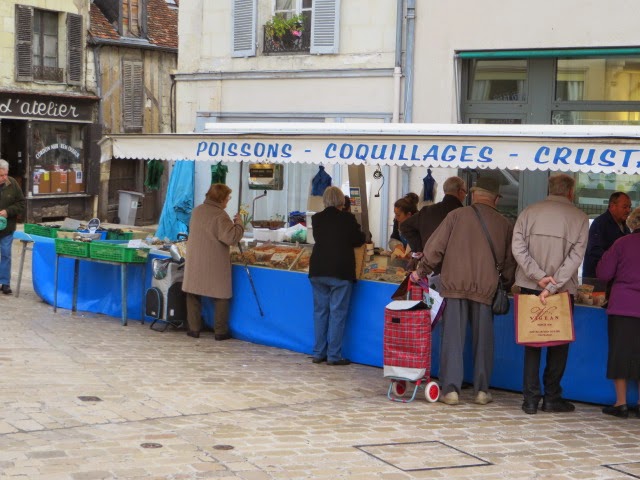 French markets are fun, they have some great produce, and some very tacky clothes. When we walked towards the market at Saint Aignan, we could hear recorded music being piped into the streets and all the town folk were milling around the stalls - seafood, cheeses, meats, veggies and those tacky clothes I mentioned earlier.

I think that the markets are also a meeting place for the locals to catch up with each other. We saw many examples of this over the morning. In fact it happened to us! We met a local American who lives in Saint Aignan with a friend visiting from the west coast of the US. We had dinner with him a few nights back. 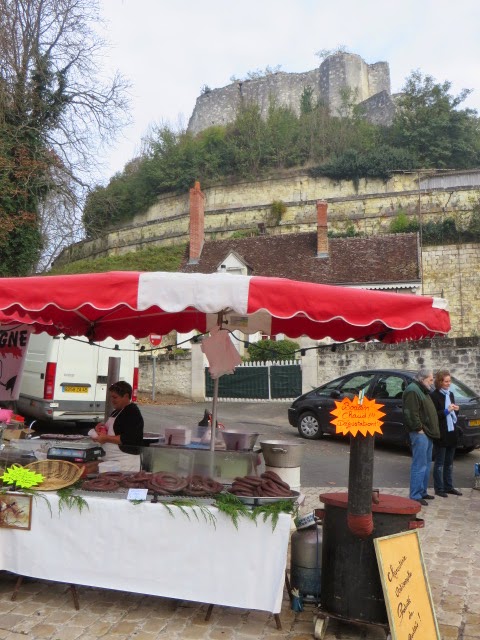 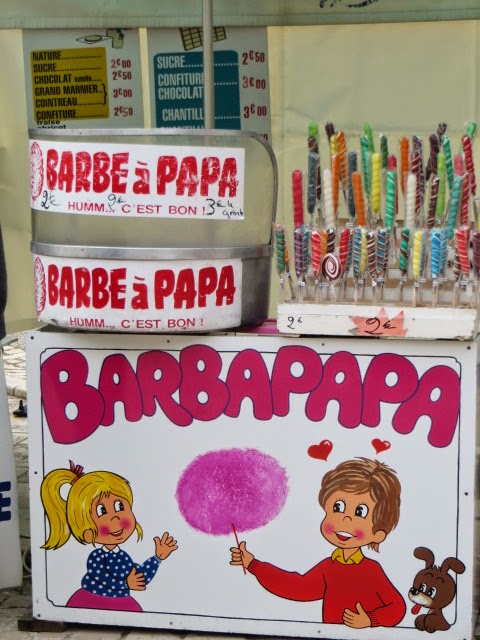 After the market, we took a drive to investigate a place recommended by friends that we are staying with. It’s called Chateauvieux not far from Saint Aignan. Yes, there is a Chateau but also it has a few examples of Troglodyte homes. These are homes that are dug into the sides of the soft hillsides of the valley. These days, many of the extensive caves and tunnels are used to store wine or grow varieties of mushrooms. 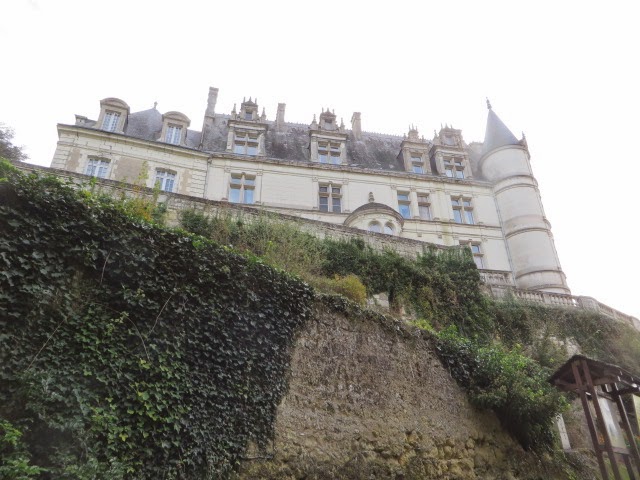 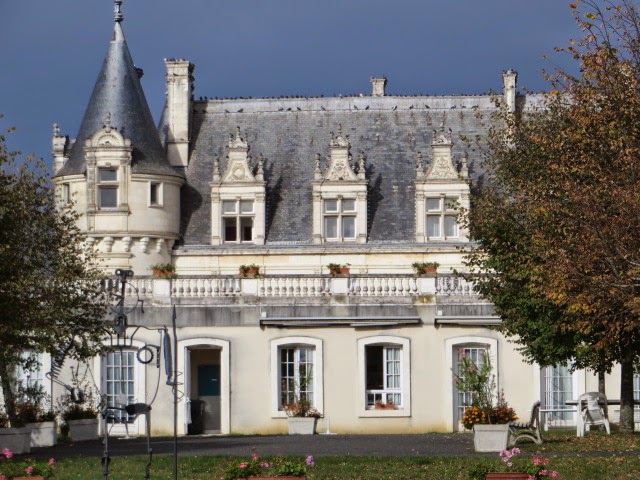 After leaving Chateauvieux we travelled to the village of Contres where they have a rather modern and upmarket supermarket as Sue was cooking dinner for our hosts in the commune of Saint Romaine sur Cher.
BUT!!!! Beforehand I had a one hour window of opportunity to shed a few calories with a 32 kms ride along the Cher on the Saint Aignan side, cross over and come up the other side and home - what can I say, it keeps me sane.

Tomorrow being Sunday brings new experiences with an afternoon apero with our hosts and their French friends, Annick and Gerard.
Our friends tell us that Gerard sleeps in the same bed that he was born in. During the war, the Germans took over his home and there is still some graffiti scratched into the soft stone walls. We've now met for a group dinner on a couple of occasions and they are always jolly company.

Monday we move to a cottage in the village of Thenay via the generosity of our hosts Carol and Michael. If you ever decide to come to the Loire Valley, their cottage is in the middle of the Chateaux district and really worth renting. We'll tell you about the life of living in a rural village in the Loire over the next four weeks while at Thenay

STOP PRESS:
I took a longer ride today (60 kms) being Sunday. The hunt season is in operation in rural France currently so you need to ride on the main roads and keep your distance from the forests. This morning as I was riding along the banks of the Cher river, I heard the sound of several large blasts - I hope the hunter's shots were unsuccessful.


We’d been to Loches previously on the Wednesday’s market day. It consisted of the usual, food, wine, plants and clothes. The central older part of the town hosted the market and it felt familiar to us on this visit.
Loches is not far south of Saint Aignan in the Touraine region. It’s an easy and picturesque drive from the banks of the Cher. You travel over rolling hills and through a few dark forests along the way. Either on the way or on the return drive you can stop at the smaller chateaux of Montresor and Montpoupon which we may post before we leave the region. We find that these smaller chateaux are kinder to the senses than the huge ones such as Chenonceau and Chambord. 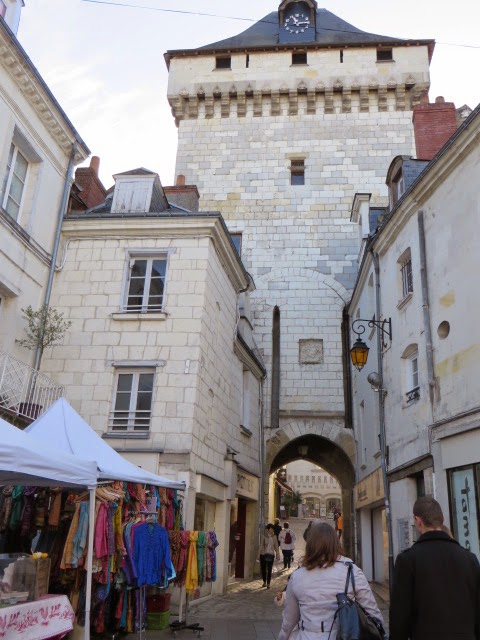 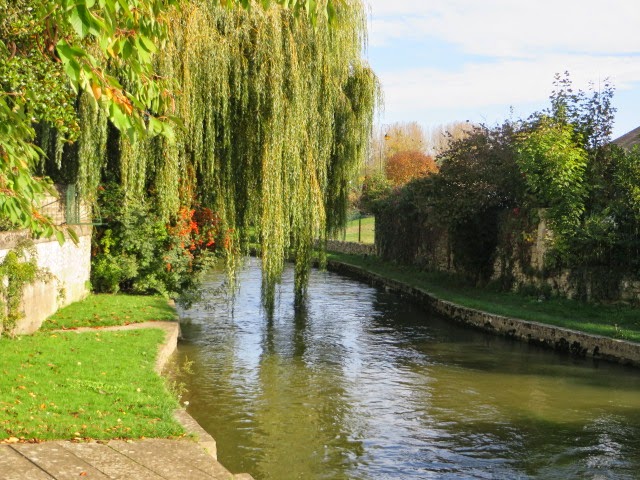 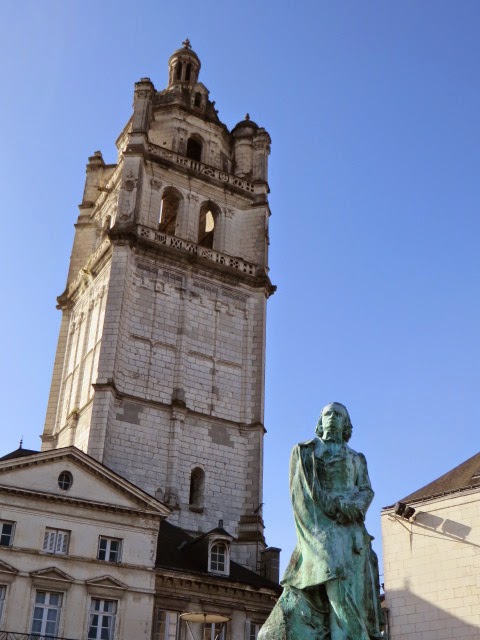 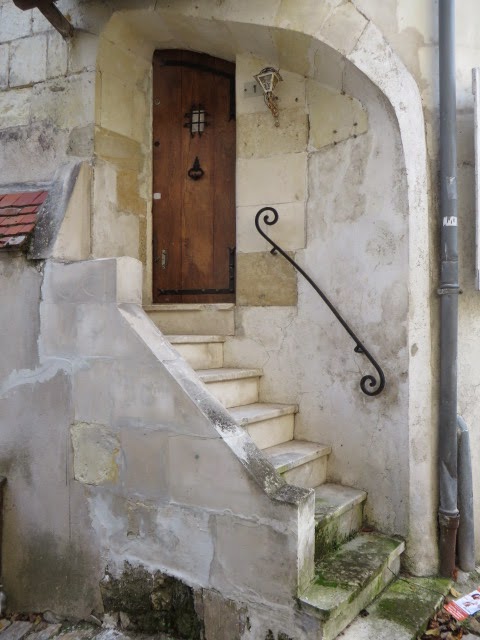 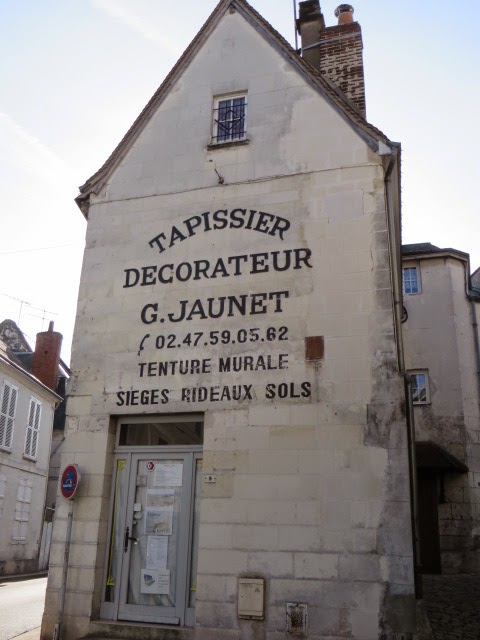 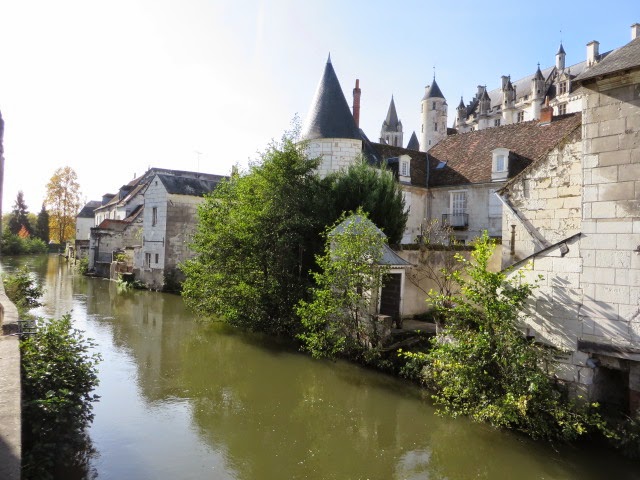 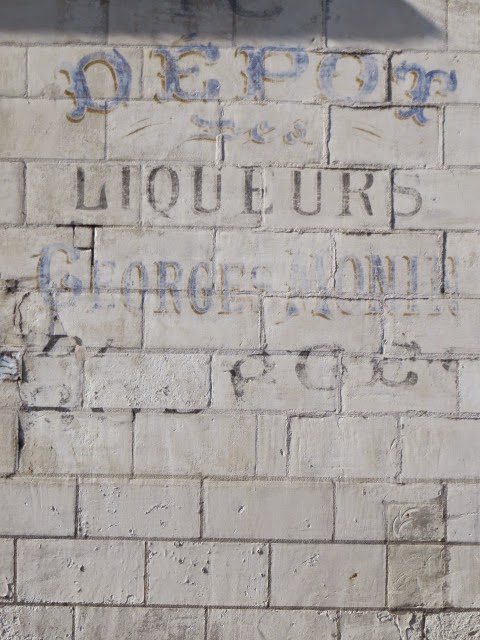 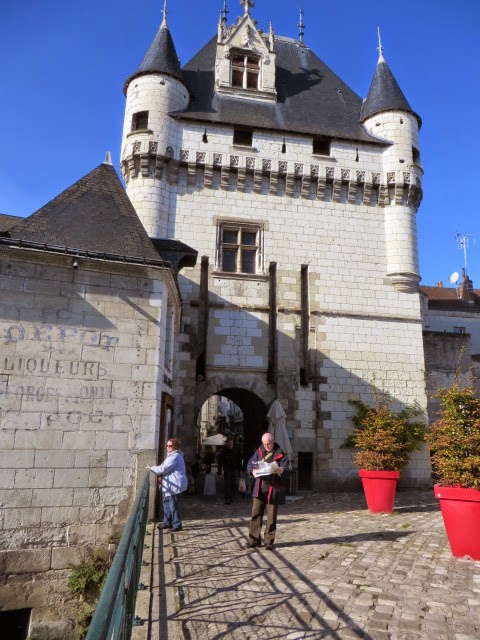 What we didn’t experience on the previous visit was the medieval Citadel -  and the royal residence of the King of France, Charles VII. Logis Royal. Here he also entertained his mistress, the La Dame de Beaute, Agnes Sorel. The nearby church is where she is buried and there is a alabaster effigy with angels beside her head. Its thought provoking that a King’s mistress should be given such a resting  place but there you go!!!! 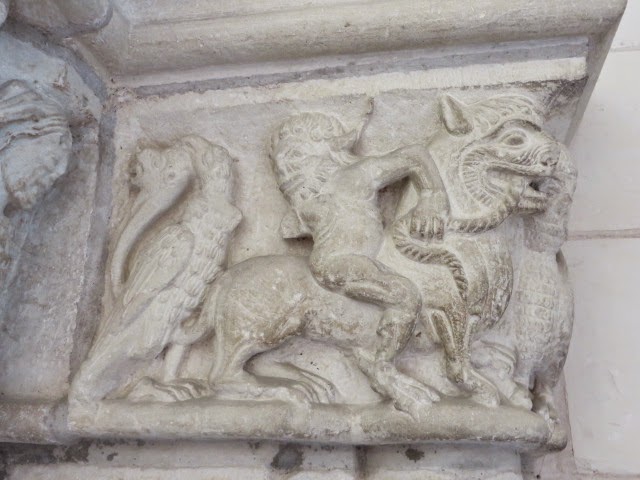 The other woman in Charlie’s life was most definitely a saint - Jean d’Arc. Initially she met Charlie at Chinon despite that he had put one of his men in his robes to fool her, but Joanie didn’t fall for the masquerade. Convincing Charlie to give her an army to defeat the English at Orleans, she returned to Loches to implore the Dauphin to be crowned King of France. Her devotion to Charles was not returned as she was, in the end burnt at the stake with no intervention by Charles.

Towards the end of our walk around the Citadel of Loches and back to the lower reaches of town, I noticed some very old photos of street scenes. It was after looking at the photos more closely and the street we were in, that I realised they were the same but with possibly with over a100 year gap. 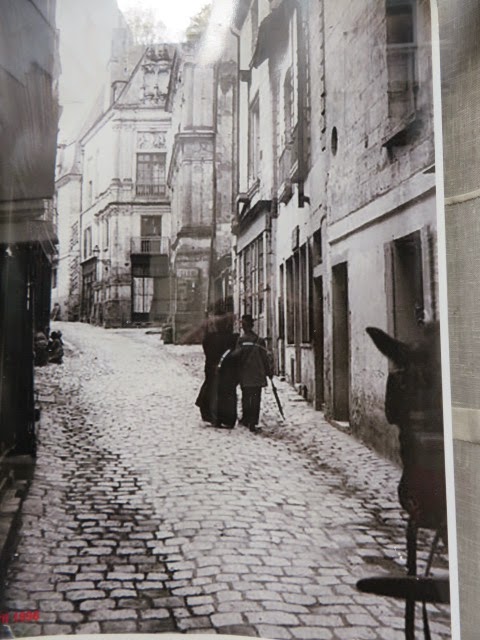 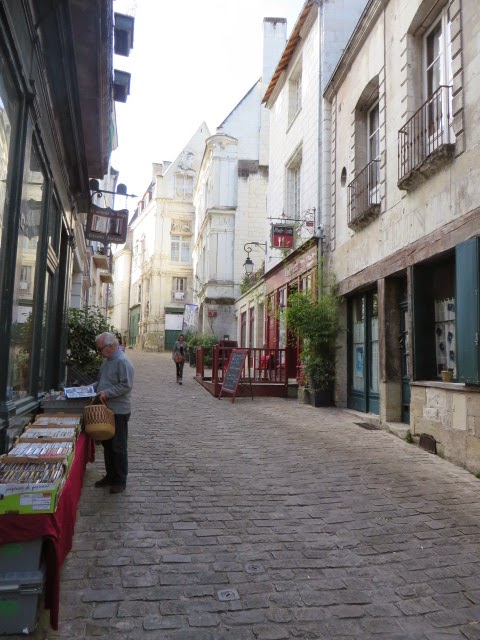 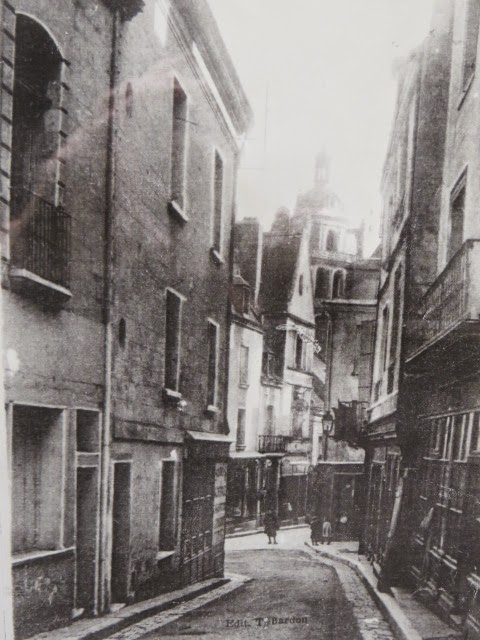 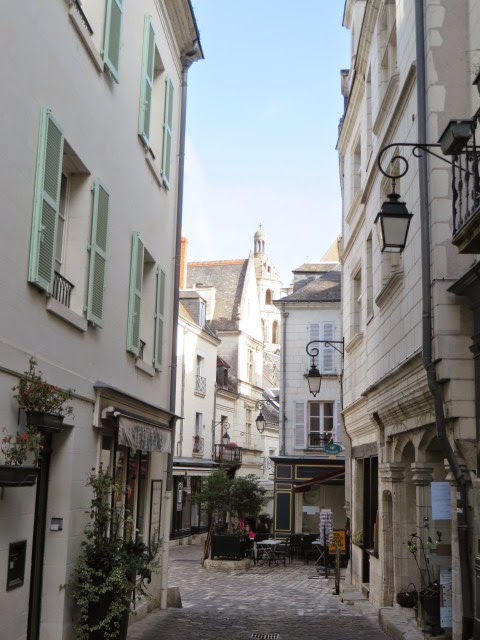 After descending from the Citadel of Loches, we were in time for lunch. As we returned to the area where the market was, it was deserted and pristine by 2.00 pm as if it never existed. It was time to leave Loches for the supermarche, and home to feed our host’s cats.

Saint Aignan is one of the villages in the local area here in Loire Valley on the Cher River. We drove in last week and had a spot of lunch before meeting up with friends where we are staying in the commune of Saint Romaine sur Cher. 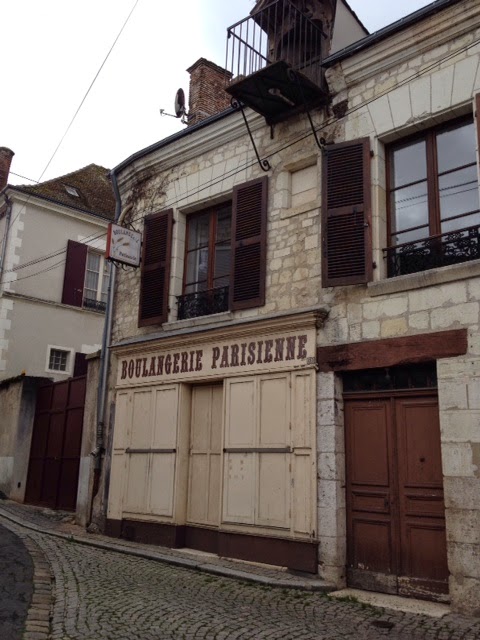 This trip is I think our fourth visit to the region and we become acquainted with several people in the area now. Our friends for whom we are house sitting (looking after cats) while they take a quick visit to the UK, we met when we rented their cottage in Thenay. It is a small rural village, yet central to most of the grand Chateaux of the Loire. We’ll be staying at the cottage later and we will give you more of an insight into life in a French rural community in future posts. Many of my cycling will be centred around the Thenay region. The roads are almost car free and traverse many other villages of this wine growing district. 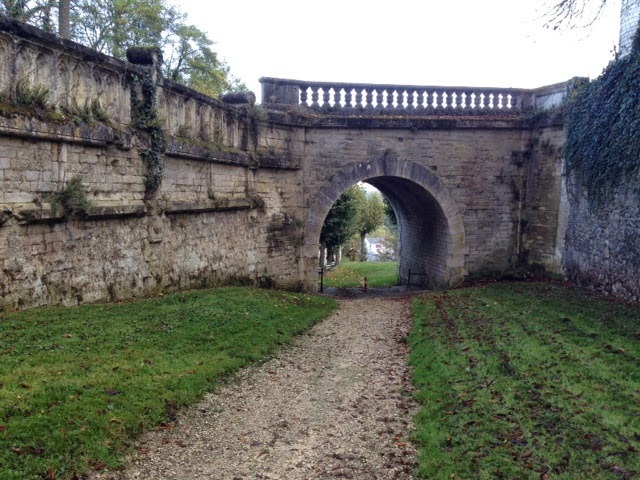 This morning we decided to cross the Cher river and have a mid-morning breakfast at Saint Aignan. Being a Tuesday, several businesses were slow to open. Mondays are worse with most non-essential businesses closed.
The town promotes itself as “Cite Medievale”  and it certainly does have some fine architectural examples of the period.
Saint Aignan also has the most amazing Chateau, unfortunately not open to the public as it is privately owned, although the gardens are accessible.
Coming from our side of the Cher, the Chateau as you cross the river is a most imposing sight. Beside the chateau are the remnants of the 11th century fortress and donjon.
I took the opportunity to walk around the perimeter of the Chateau which also took me closer to its  amazing ramparts. 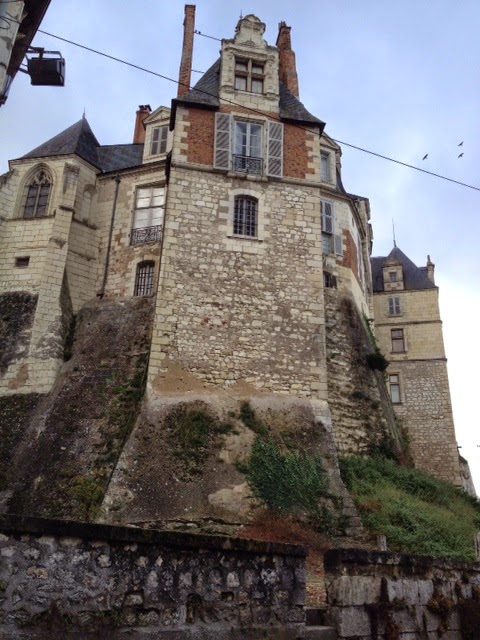 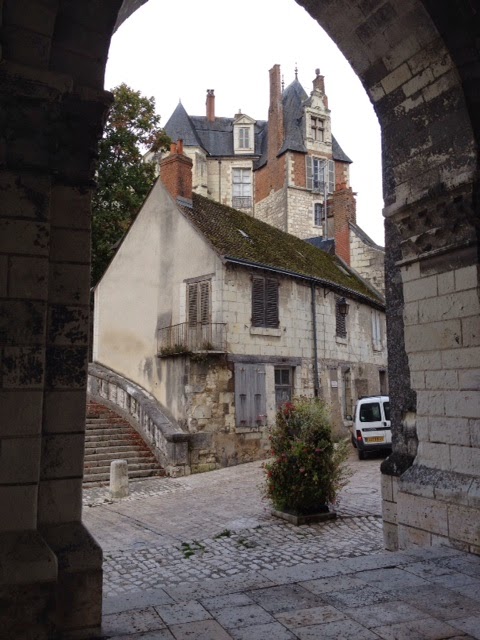 As you walk back to the centre of the village, you are faced with “collegial de St Aignan”. Its origins date from the 11th century and in its lower depths is the crypt with brightly coloured painting of religious scenes. 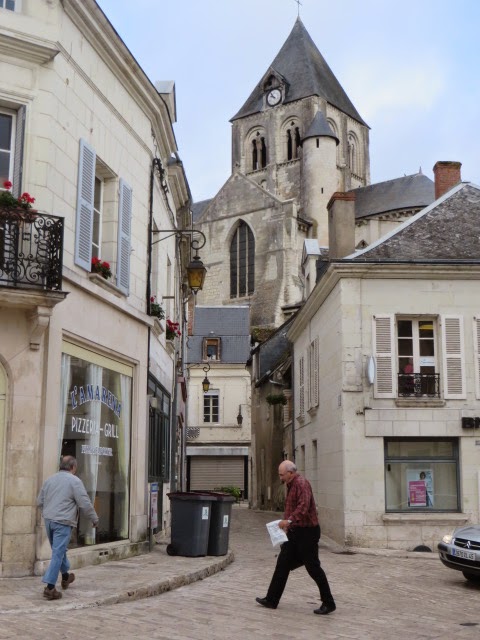 With time on your hands, you can walk the many small walkways nestled among the part wood and part stone medieval buildings to experience what it may have been like to live in this village through the centuries. Be prepared to have comfortable walking shoes as the only flat streets seem to be on the river.

Lunch today took us to the Montrichard but that’s another post for another time.
Today we go to the Loches market and will try to post some photos later. This post comes to you through the generosity of fellow bloggers here in Saint Aignan while we feed their cat.