I've posted a few pic in the past of Trentham Falls but every few weeks it takes on a different look.
These are taken with my iPhone and I play with an App that I downloaded to it. Yes, they are enhanced and played a bit with but why not? Its all art in away. 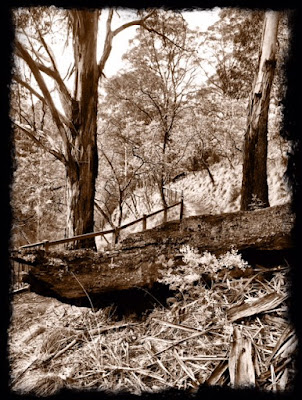 Looking from the Inside Out!

We have moved on a few steps since our last post update on the progress of the house. These are steps which are not so evident from a drive by. In the last two weeks we have had the electricians, plumbers and the heating/cooling people weave their magic. The walls are now all wrapped up in insulation paper awaiting the brick layers and plasterers to start working next week.


Thought I might add a couple of exterior shots of the Al Fresco area. This is where I barbecue, entertain mates over a beer or three and enjoy the afternoon sun.
We are tossing up as to whether add a timber deck under the roofed area or add very large tiles to the concrete base that will be poured towards the end of the building process. The area is a huge L-shape, all undercover. You may like to offer some thoughts. 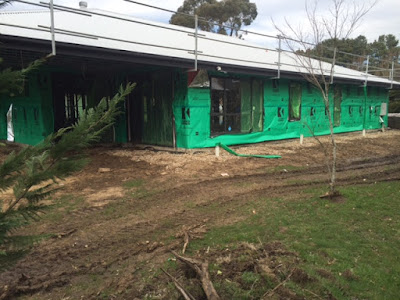 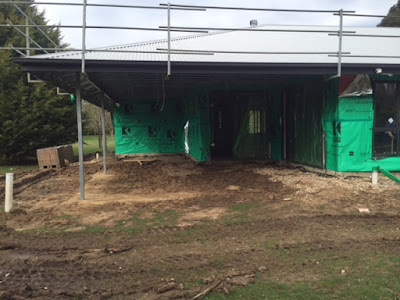 We expect that as August draws to a close, we will be at lock-up stage and the cabinet makers arrive, followed by painters and finally the floor coverings are installed. We still have our fingers crossed that we are in by late November - another 14 weeks away.
Posted by Leon Sims at 5:46 PM 6 comments:

Today the house progressed one more step with the color-bond roof going on. The roofing is a corrugated steel, rather than tiles. There is nothing more romantic than the sound of rain on the roof with a wood burner in full operation while sipping a glass of port in mid-winter. That is of course we haven't taken off to France for their summer next year.
Anyway the boys worked in todays rain and the building supervisor Clint has been great as all he has estimated has happened despite our very wet weather.  As you can see from the photos, the surrounding ground is a quagmire of mud. I expect we will be bringing in soil after the house is handed over from our builder. I'm personally looking forward to the prospect of establishing our garden. BTW, did we mention that our property backs on to a reserve with the creek running at the very back. Visually it belongs to us and offers an extension to our block. I wonder how we can take advantage of this. Do you have any ideas to offer?

Tomorrow we are off to lunch in the city by train. Sue was given a voucher from our son and partner for her birthday present. Maybe we have another Blog Post coming very soon.
Posted by Leon Sims at 6:48 PM 4 comments:

A LOT CAN HAPPEN IN A WEEK

And it did last week. The previous weekend we stayed in Melbourne to attend a Tour de France function on the Saturday Night with my city cycling buddies. While there we thought we might take an impromptu test drive in a new car that might possibly be a future consideration. Sue's 15 year old  Peugeot 307 was looking close to being replaced. It had served her well with just over 100,000 kms on the clock. We've had a good run with Peugeots in the past, this being our third. It was only natural that we looked at updating with a new Peugeot. Being "country folk" now, we though a small SUV might just suit our needs.

The new Peugeot 2008 SUV was our choice so we went for the test drive and impulsively put down the deposit and picked up Sue's new car on the Wednesday.


On Thursdays I play Petanque with several other retirees in Trentham and my friend Geoff had recently purchased a 1954 Slough (English) built Citroen 2CV and it had arrived from Western Australia to Melbourne. I offered to drive him down so he could drive it home. Nothing ever runs to plan as on arrival, the transporters had left the ignition on and the battery was dead flat. We finally jump started the little 2CV (several times) and eventually we were on our way. I may have mentioned before that Trentham is in the Victorian central highlands - that's around 600+ metres above sea level.
Basically the drive was all up hill for this tiny 375cc two cylinder motor. As we came to an incline the 2CV would struggle up hills at below 60 kph with me behind with the hazard lights flashing. We finally made the 120 km journey home safely.

Friday galloped along so we organised the spare bedroom for the arrival of friends who were coming to a dinner and entertainment at a local favourite place of ours in the village of Malmsbury, just around 10 kms down the road. Small Holdings is owned by the congenial David who always makes us welcome. He calls Sue his Malmsbury Mum. He calls me "Man Bag Leon due to the cycling Musette that I tend to carry often. Anyway I digress once again. The night featured Miss Bee Townshend who with a pianist and bass player gave us a marvellous selection of songs from a past era that included torch smoke songs to stage and film songs. All this with a 3 course meal and drinks made for a delightful evening plus we met more of the locals as well.

Come Saturday we were meeting with a group of Melbourne cyclists from our old Bayside area. Several of our crew went to Italy in 2014 for the L'Eroica cycling event in Chianti. This event is conducted on both bitumen and gravel roads on bikes from a past era and must be pre-1987. That means steel and toe clips and straps - no modern carbon fibre here.
We can't go this year due to the house being built and no one to look after our blue burmese who is in her 20th year. We did however host this practice ride in our district. We rode 90 kms with about a third of it on gravel. The weather was not so kind with a high of 12 degrees. We started in mist, then rain and very little sunshine. Despite the conditions, the group had such a great time enjoying the sites of the district that it will now become an annual event to be known as the "Kyneton Klassic".

So that was our week - at this stage we are expecting a quieter week but one never knows. The house is now at the stage where the roof goes on this week and the bricks are due for delivery this Tuesday so we may have lots to report next week.
Posted by Leon Sims at 12:11 PM 4 comments: