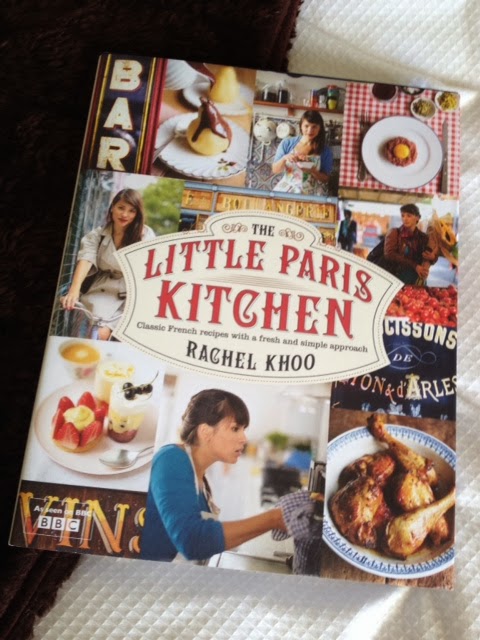 Everyone knows Sue likes to cook - we have this book shelf that is all of Sue's cook books. I'm the culprit. Saturday we went to look at a replacement car for my work car - nearby is the Prahran Market and Sue's favorite shop, "The Essential Ingredient".
They have heaps of great things for the passionate foodie as well as a fabulous book section. For Christmas I bought Sue the Rachel Khoo's "Little French Kitchen". The photo above is of her first book, "Little Paris Kitchen", Sue tells me this one is so much better.

It must have inspired her to a cooking mood for Sunday Night. No cheese toasties tonight but it was a sit around the tellie situation. Get a grip Leon, I never do cheese toasties.


So the weekend has gone and the working week begins, see you with Wednesdays in France soon.
Posted by Leon Sims at 9:24 PM 10 comments:

G'Day - Yep, it's that time again - happens once a week - this time with a full house.

Andrew, Mitchell, Carly, Sharon, Denise, Darren and Jack my Dad - oh yes, Sue and I.
Now that's a few bottles of bubbly for Champagne Friday.
A Family and friends Affair 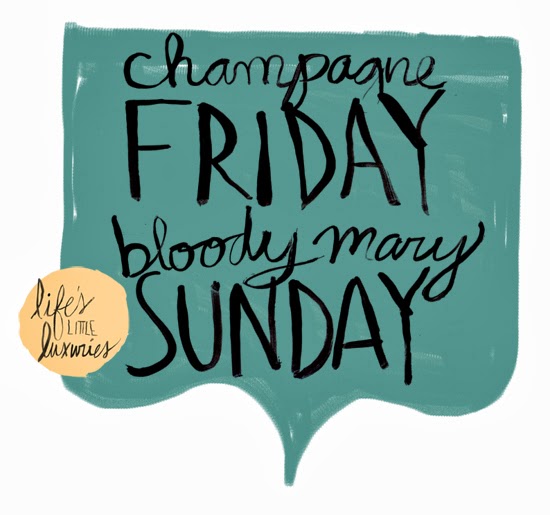 Bloody Mary Sunday can wait for Saturday.
Do tell - what did you do on this Friday night?
.
Posted by Leon Sims at 5:17 PM No comments:

Just another Wednesday in France
It sounds nice doesn't it - 200,000 hits. People who have stumbled across your Blog.
But!!!! Let's get real. People hit the blog and think, that's not what I want............and move on.
But for some it touches a common point - we know because we read blogs and it happens to us.

We've been doing this since I can't remember when (maybe 2009) but I remember why we did it. It was a way to share our journeys overseas with family and friends. The funny thing is that we made more friends, some we've never meet face to face and some we have - we've never been disappointed either way. I'm sure its the same for you. Without naming names, we've been very blessed with our friendships through our Blog.

There's a lady in in California that has introduced us to others that we've connected with. We've enjoyed the company and friendship of a couple who live on the Cher river whom we rented a cottage in a little village in Thenay. We've enjoyed a marvelous evening ( a few actually) with them and another couple who live further up the river at Saint Aignan, Many sore heads the next morning!!!!

Then there's that Aussie/English couple - well really, he's a 10 pound Pom and they took us for a lovely drive in Celestine.
There's also a lady with a VERY tall husband whom we met on our last trip to walk around Odour sur Glane. Not a pleasant second time experience for her as the village remains as it was after the Nazis raised it to the ground and murdered all the inhabitants, women, children and the men.
Lunch afterwards confirmed that there was a friendship that continued via both our blogs.
There's others that we haven't met face to face but I feel we know them and share their daily life.

Maybe we'll get to meet those we haven't as yet met but hopefully we will during our 10 week stay later this year.


Sue and I say thank you for reading and please keep sending comments.
We love hearing from you.
Posted by Leon Sims at 10:39 PM 8 comments:

No More Car Industry in Australia

Over the last six months three of our major car manufacturers, Ford, General Motors Holden and Toyota have announce that they will cease building cars in Australia. Really it means Melbourne and Adelaide where the plants are located. Further to the actual employees at these plants there is the flow-on to the suppliers to the big three. Over the next two to three years there will tens of thousands workers looking for employment.
It's estimated that there will be over 30,000 jobs lost by 2017.
The recently installed Government have denied any further subsidies to the car manufacturers although there are other reasons for the closures. The high Australian dollar makes manufacturing uncompetitive in the global market and the Australian Market has changed. The general Australian population are not wanting big cars anymore - well they are but not as much as they once did. With more choices out there, Australians have discovered more economical cars. 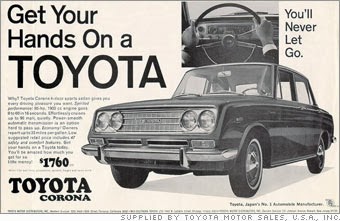 I've only had Holdens and Fords as company supplied cars over the years. As personally owned cars, I've had British, Japanese, French and Italian cars, all of them smaller and more versatile or just that little bit different to be a bit more interesting.
During the 60s, most Australians drove a Ford or Holden, then the Japanese cars gave us an alternative choice. In more recent times, the likes of the Korean cars have improved to the extent that bang for buck, they are excellent value.

Email ThisBlogThis!Share to TwitterShare to FacebookShare to Pinterest
Labels: cars

Hope we are not getting too boring with our Wednesdays in France photos
but, it is our second home in a way.
Many scenic memories and memories with friends met along the way. 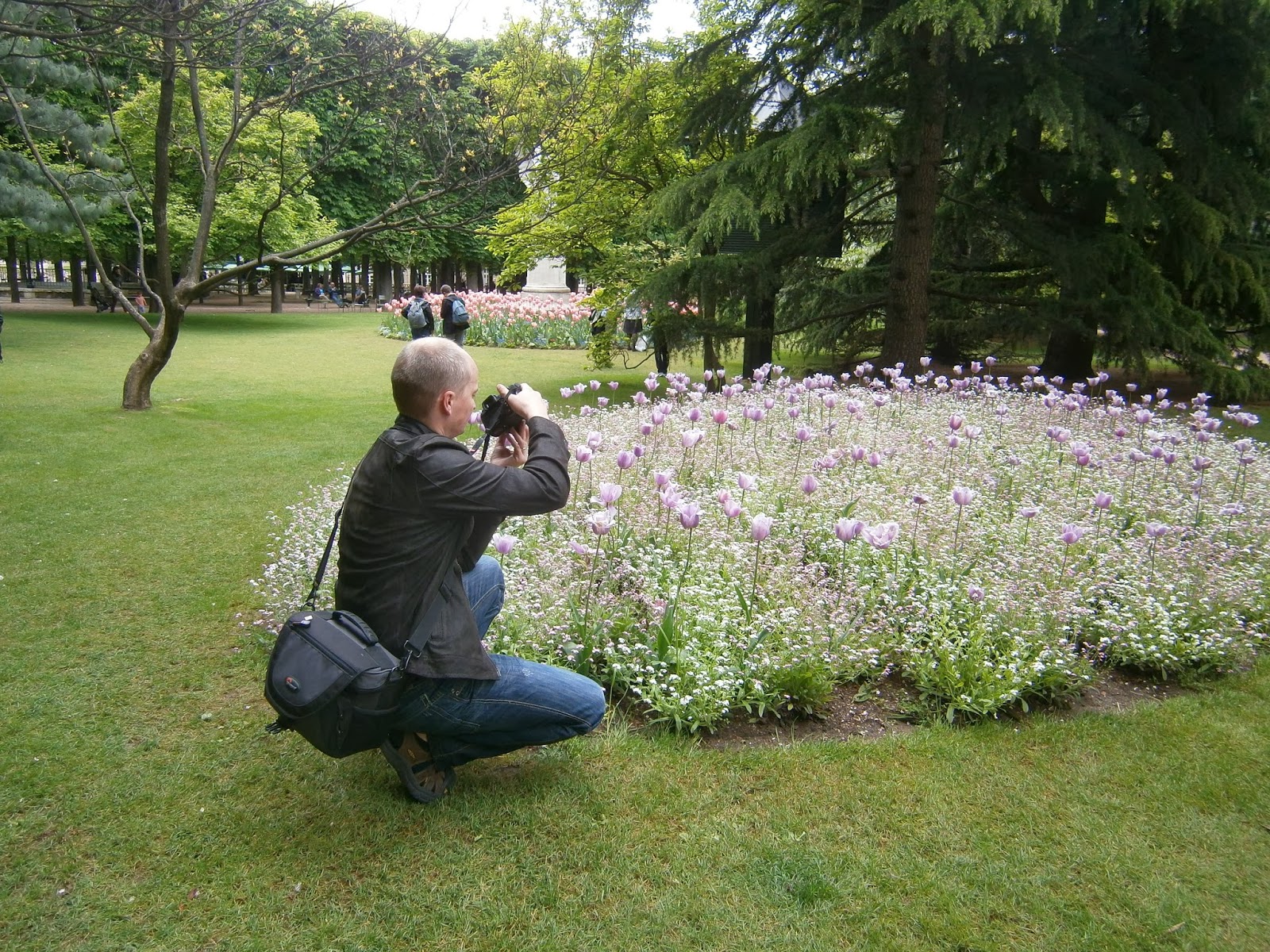 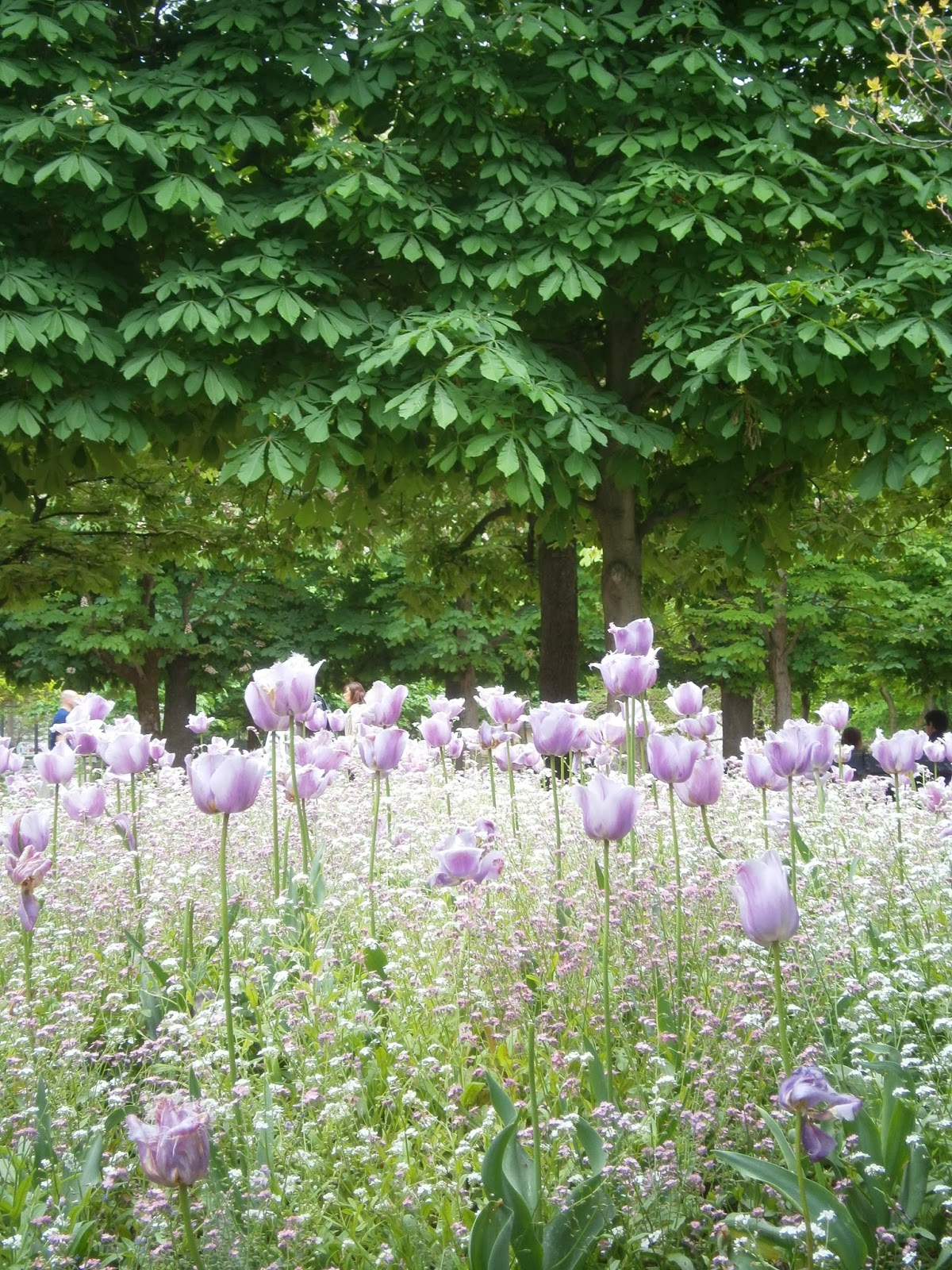 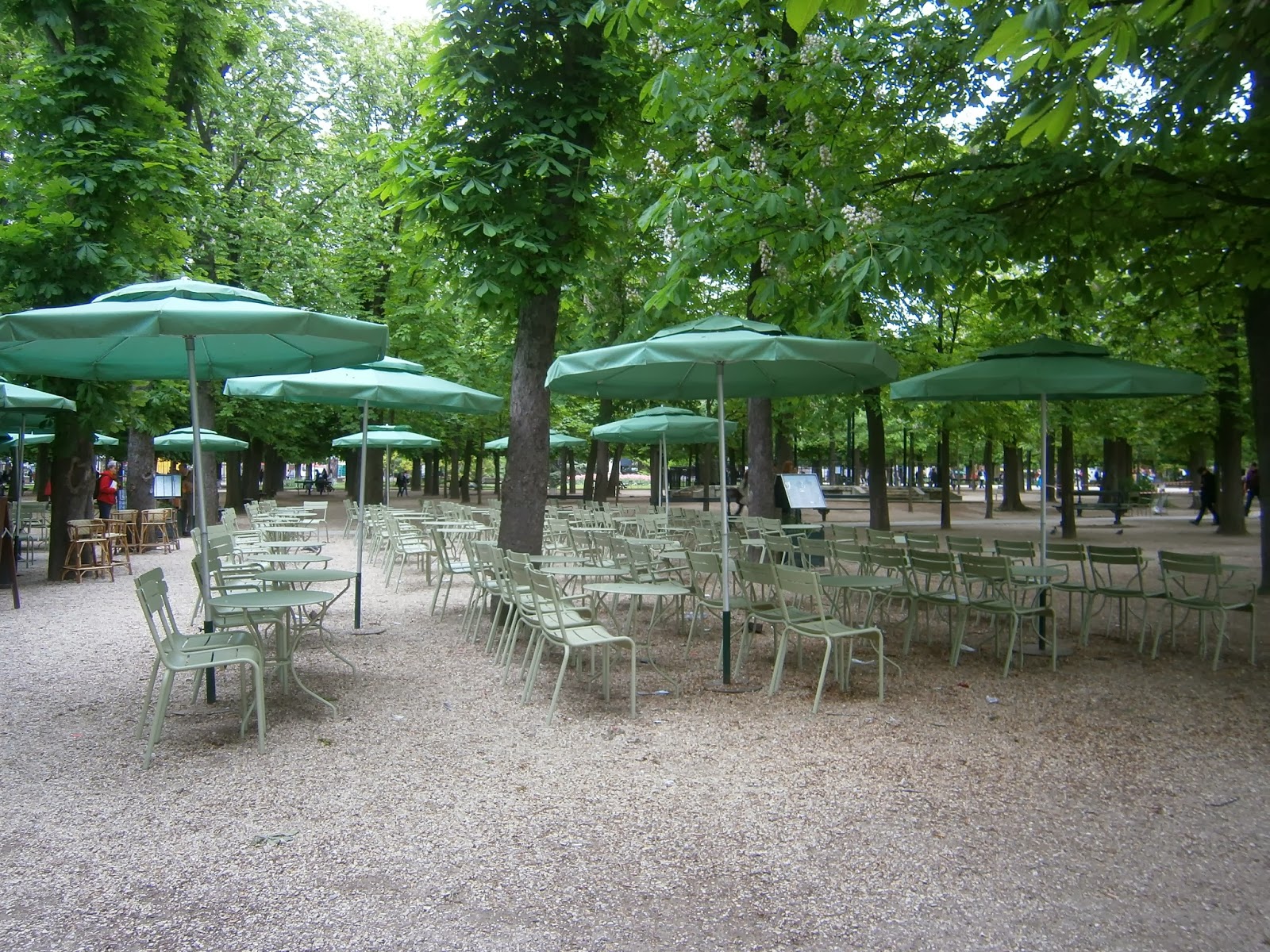 When we were driving back from the Latrobe Valley yesterday, we were amongst the bush fires down in the district of Gippsland, east of Melbourne.
Today, I had to visit a client in Healesville in the Yarra Valley and as I drove through the Valley's wine growing district, the sky over the mountains to the north grew hazy with smoke from the fires in that region.
It seems Victoria has bush fires throughout the state and everyone in the rural districts are on alert.

On the way back from my appointment in the Yarra Valley, I made a stop for a light lunch and opened one of Melbourne's two main newspapers, the Herald Sun. Its not my favorite paper, a tabloid that in my opinion makes news when there is none - a gossip newspaper. This was not one of those occasions.
The cover below of the Herald Sun gave a good account of why the whole state is on alert. 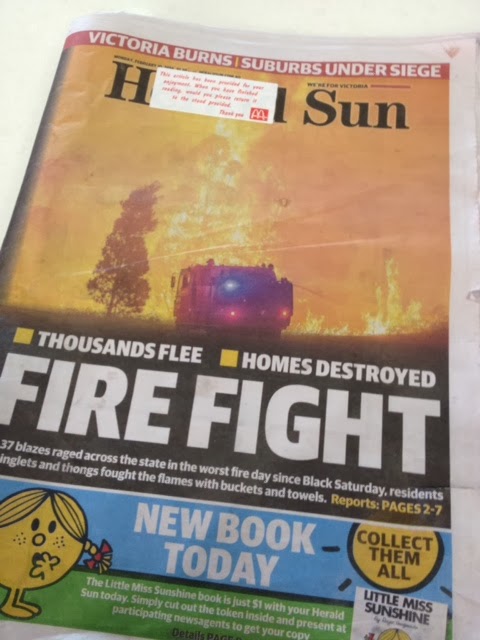 The fires destroyed homes in what once were small rural towns four decades ago and today they are populated outer suburbs of Melbourne. Although being suburbs, they retain a wooded environment prone to adding fuel to bush fires. Below is a photo of Warrandyte - an environment that was one of my early cycling training areas. 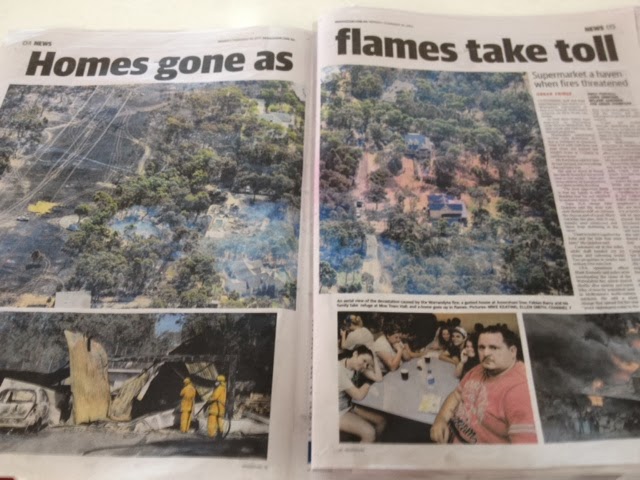 Only yesterday the towns of Morwell and Hazelwood closed the main highway and it was only luck that we were to the west of those towns that allowed us to return home with out being diverted. We did however see the road closure of the highway for those travelling west from where we had come. 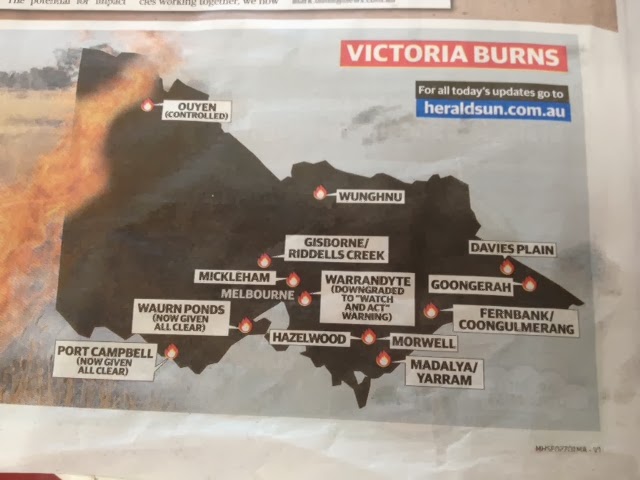 The photo below depicts the bush fire scene very reminiscent of the flag belonging to our indigenous people of Australia. One wonders how the original Australians survived these natural infernos not to mention the wildlife. 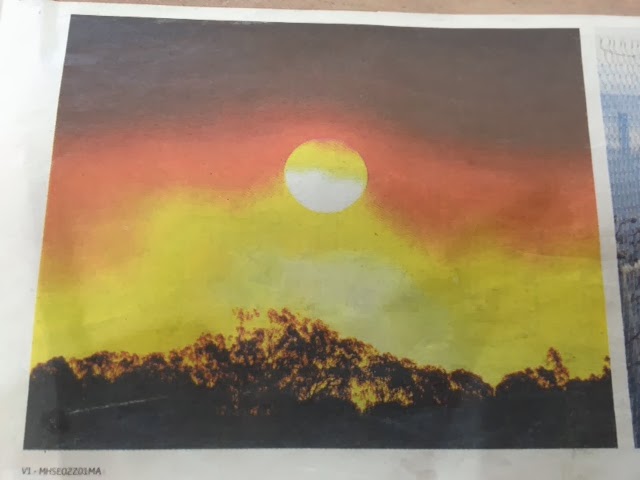 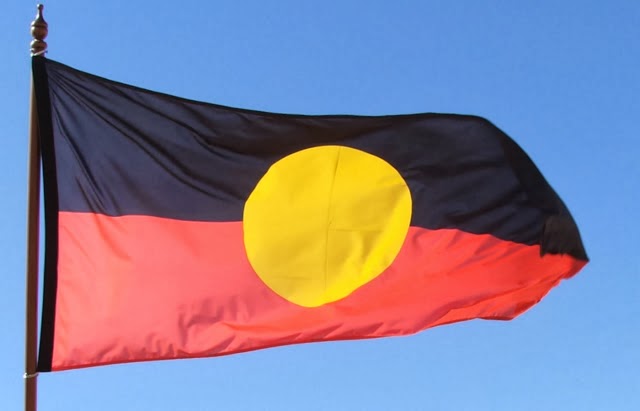 And as I write this post, I'm made aware of some of my northern hemisphere blogging friends having to cope with constant rainfall and flooding.


Fortunately to date we have no loss of life. Let's hope it stays that way.
Posted by Leon Sims at 3:38 PM 6 comments:

Bush Fires in the Latrobe Valley

Today Sue and I travelled to the Latrobe Valley where the local cycling club held a combined clubs track race meeting at their Velodrome. The winds were intense with temperatures reach the very high 30s (39 actually). The whole state was on bushfire alert. During the lunch time break I returned to the track for the afternoon session and heard fire trucks and an unusual amount of traffic passing by where normally in this regional town it would be traffic free on a Sunday. Looking into the distance there were great plumes of smoke such as shown below.
Traffic had been diverted from the main highway a few kilometres up the road and by the velodrome. After the meeting was over and the car was packed we drove further down the highway to Melbourne where we could see more plumes of smoke rising from the Baw Baw Ranges to the north of us, but many kilometres in the distance. Traffic coming up from Melbourne was stopped by the local police and being diverted from the direct we had come.
We knew that conditions of the day with high northerly winds with high 30 degree temperatures would be a day of high alert. Fortunately so far there have been no fatalities however some people have lost their homes.

Living in a big city like Melbourne, we live in a cocoon shielded from the realities of bush fires. Today we saw them at closer quarters than the 6.00 news.
Posted by Leon Sims at 10:16 PM 6 comments:

Do you ever feel like a boy on the run?

Do you ever keep a little bit of the child in you, regardless of your age.
If you do, your friends will be ageless - young, old, middle aged - what does it matter, as long as you enjoy.
Tonight we had our friends for dinner - we aged from 26 to 63.
Champagne Friday is always magic in the Sims household. 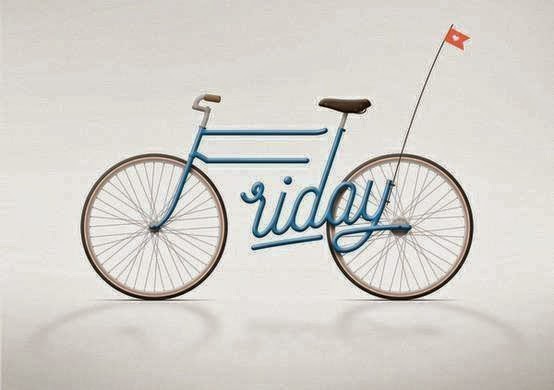 Only 9 months before we return to France

It was 2006 - our first trip to Paris together. We had a friend who lived there. Marcus lived in a Broom Closet in the Marais and from memory with a lift that occasionally made him late for dinner with friends.
The lift didn't disappoint on this occasion when he was to meet us in the Bastille.
Marcus is a world traveller and a helluva nice bloke that we still have a long standing friendship with. He has now returned to Melbourne with his lovely wife from Thailand. Our other friends from Paris, Leigh and Sophie just recently returned to Melbourne so Leigh could visit his 90 year old father Steve. All six of us caught up at a Thai restaurant in January.

It's friends that make life rich - do you agree?
Posted by Leon Sims at 9:49 PM 3 comments: 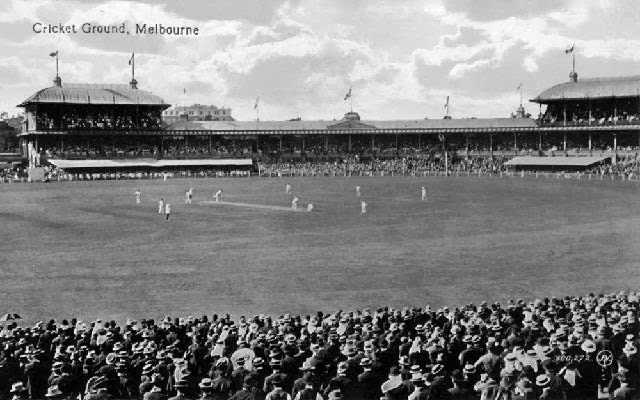