A New Car in the Driveway and a Canberra visit

We've just returned from Canberra, land of the Federal (or more appropriately feral) politicians. At the time of our visit, the Royals (Kate and Willie) were in town, not that you would have noticed but then again, our Australian Capital is fairly quiet.

What was I on about - yes, we went there to trade my MG ZT190 for a low mileage Citroen C4. Why is it that my cars are always black? After doing the change-over we decided to celebrate over a bottle of wine at the Canberra Hyatt. This is not a modern building but actually from Canberra's earlier era built from 1922 to 1925. It's very "High Tea" with Bell Hops in plus, golf socks and flat caps.


We sat in the garden with the last sun of the season as autumn was greeting us with the colours of orange, yellow and ochre. The leaves were falling to the ground and telling us that winter is not far off. Canberra being not far from the Alpine Region has temperatures sometimes at 3 below.

It was a bit of a rush visit with a 1400 plus kms drive there and back - That's Australia!!!!
A two night stay didn't allow for much sight seeing as we left the Nation's Capital early on ANZAC morning to be back at Melbourne Airport to pick up our son Andrew who was flying in from Sydney from a conference he was attending.

There is a town off the highway that I've always wanted to visit but we have never taken the opportunity to stop. We left Canberra without having breakfast so this time we took the turn-off Jugiong (I still don't know how to pronounce it). What a delightful surprise it was and next time we travel the Hume Highway, this will be a refresher stop every time.

Wikipedia - Jugiong is a village community on the banks of the Murrumbidgee River, in the central east part of the Riverina. It is situated just off the Hume Highway, by road, about 30 kilometres southwest from Bookham and 40 kilometres northeast from Gundagai. At the 2006 census, Jugiong had a population of 232 people.[1]
It was first settled in the 1820s when Henry O'Brien started grazing sheep on the Jugiong Run. 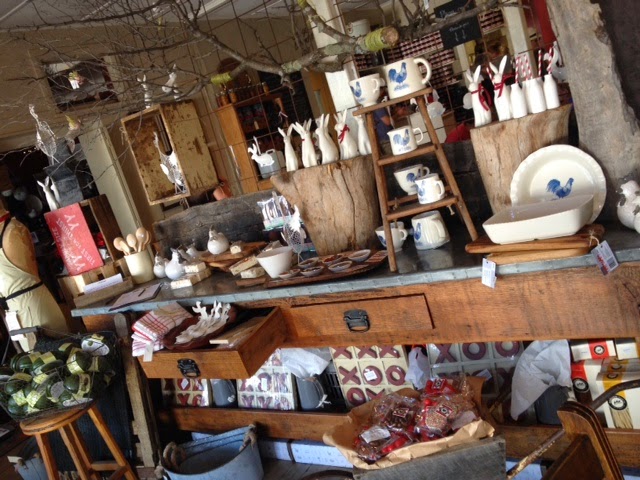 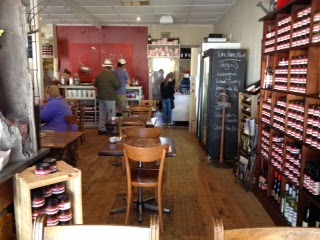 We saw the sign which told us there was a cafe there, so we turned off, hopeful that it would be open on Anzac Day morning.
Not only was it open, but in this tiny town in the middle of nowhere, it was doing a roaring trade. And no wonder!
It was fabulous! very rustic looking, with lots of shelves around the room, packed full of their own branded jams, dressings and preserves, all made on site and sourced from local ingredients, as well as items of kitchenware for sale. There were fridges full of local produce and a freezer with home made curries, soups and lasagne again all sourced from local farms. In the corner was a young girl manning a large coffee machine which went flat out the whole time we were there. Attached to this was a long, high bench with a mouthwatering display of fresh cakes and muffins still warm from the oven.
Blackboards displayed the menus for the day. We both chose toasties, mine with fine slices of lamb from a local farm, lightly smoked along with a local cheese and home made relish. Yum!
It was a fabulous find just off the Hume Highway which boasts long stretches of boring road,  punctuated only by service stations attached to all manner of fast "food"outlets.
As Leon said, I bought the book (one of the two on offer) and tonight will probably make something from it. Homemade, slow cooked baked beans, rich with bacon and tomatoes will be ready for anyone wanting them for breakfast in the morning!
The book is not only a cookbook however as it also contains snatches of poems, mostly Australian, related to the countryside and the experience of Australian country living through the years, harking back to the days when shearers expected a breakfast full of mutton and other doubtful delights.

Recipes and further information on their website here;
http://www.longtrackpantry.com.au/

Email ThisBlogThis!Share to TwitterShare to FacebookShare to Pinterest
Labels: canberra 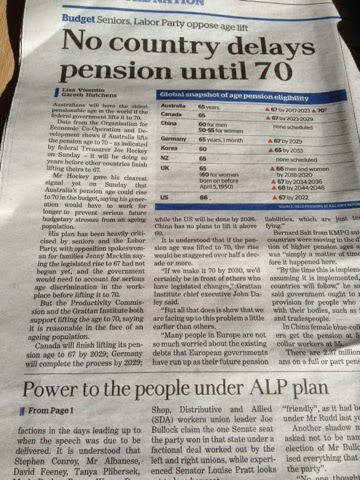 It seems our federal government wants to penalise those approaching the current pension age of 65 just because of past mismanagement of past governments . As you can see from this mornings newspaper article in Melbourne's Age, the Liberal government hope to extend the retirement/Pension eligibity age from 65 to  70. There goes 5 years of retirement and besides what about those who need to work because they don't qualify for the pension. Who will employ a 65 year old?
Posted by Leon Sims at 9:23 AM 6 comments:

Email ThisBlogThis!Share to TwitterShare to FacebookShare to Pinterest
Labels: Opinions

I'm not sure what it is but I see it from time to time with our fellow bloggers, posts get further apart.

It's happening to us. It's not as if there's not much happening - quite the opposite - too much is happening.
We've celebrated four birthdays in the past two weeks, went to a wedding, had the book launch and celebrated our 30th wedding anniversary. Our life is full and that's what you want - isn't it?


Yes, and there's work that sometimes takes up 12 hours of the day "door to door".
That certainly fills the day - and the week.

The other exciting thing that happened over the weekend was that we had an auction in our street and the house up the other end of the street sold at over $80,000 above the estimated sale price.
All good for us with the impending sale of our place at the end of this year. We have requested quotes for painting inside, then having the baltic pine floorboards sanded and polished. We'll get the front fence replaced and the back outdoor decking rebuilt. That will all be done before our holiday at the end of September.
At the end of September we fly off to Italy for a cycling event in Tuscany, spend some time in the lakes area of Como before driving to the Loire to meet up with friends. Financially we are not rich but we save hard to enjoy friendships from afar. France has become our spirital home although I don't know if we could ever make that final move so far away as I see some of our favorite bloggers doing. You are all very brave.

Our next move most likely will be to the island below Australia although part of it - Tasmania.
Next month we are spending a long weekend in Launceston, second biggest city of Tassie with just under 100,000 population. It has a good culture of food, coffee and cycling. It seems like our destination after exploring other possibilities in our state of Victoria.


Who knows where life takes us - enjoy the journey we say. 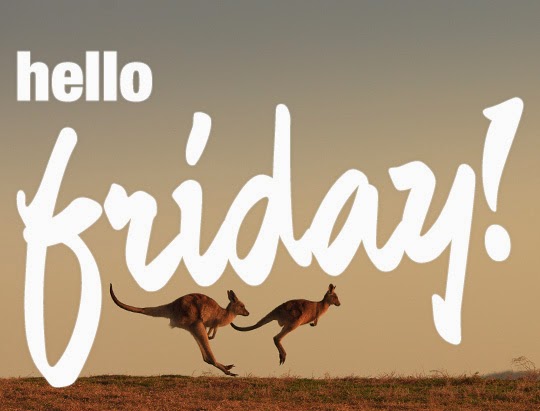 I have a new book

Bragging rights - yes, I know, it's all about me but if I don't mention it - who will know.

My second book was released last Sunday at Melbourne's Classic Motor Show where my car club, MGCC of Victoria was in attendance. The Club these days is close to 2000 members and Sue and I have been members since almost when we met. BTW we celebrate our 30th wedding anniversary next week.
We joined the MGCC in 82 with a red MGB. An MGA followed with two saloon MG Magnettes, an MG1100 and now the 2005 MGZT190. Its been a long association with many years as active members until   the turn of the millennium where my interests turned to human powered two wheel activities.

The first book was about the historic Rob Roy Hill climb venue that ranks beside some of the great UK hill climbs such as Prescott and Shelsely Walsh. That book took 12 years from start to finish.

This one took maybe 6 years so I'm improving. The book titled "From Larrikins to Old Snoozers" was a project of passion. Its the only way to write in my opinion.

On the day of the launch I attended the launch and was invited to sign each book. As I was signing books I met many old friends that I'd lost contact with since pursuing my old sport of cycling - and as I rekindled old acquaintances, it changed my mind about the main focus of the book. It wasn't about just the history of the Club, but more about the history of friendships. 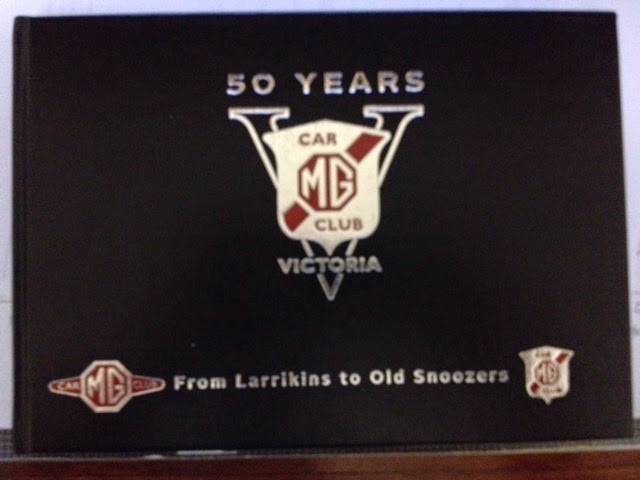 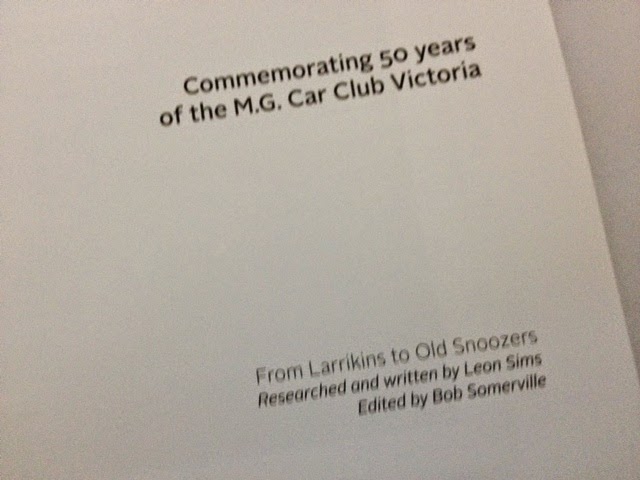 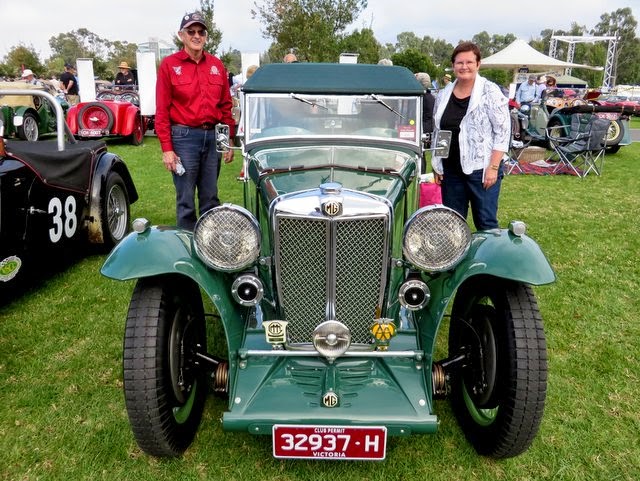 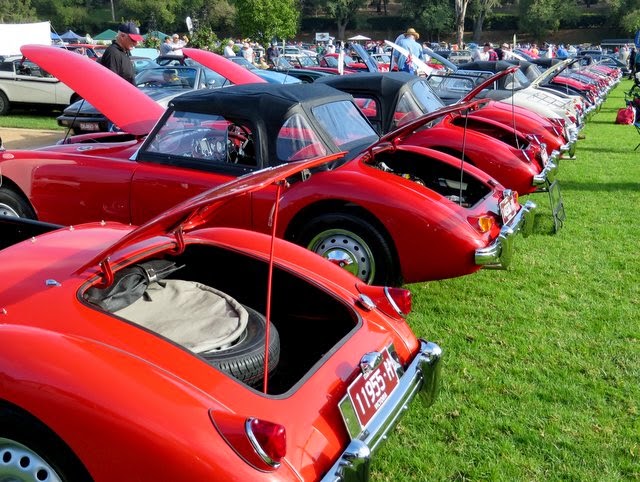 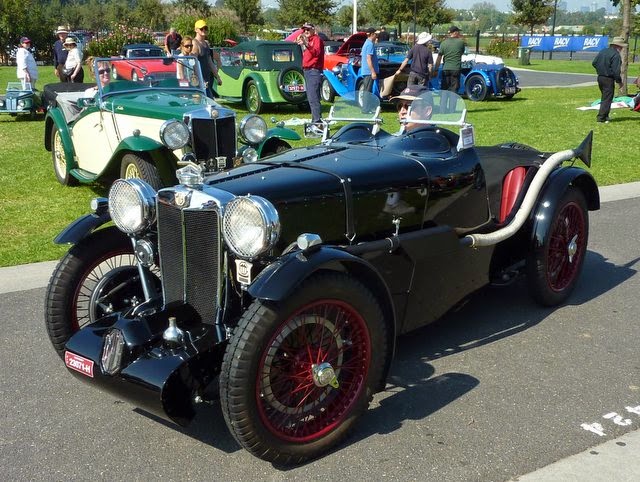