I've been renovating No 2 son's bedroom, so during the morning I was indoors. Towards the late morning I took a wander around the yard and noticed that colour was returning. Splashes of pink and white seep out from the green on the jasmine. The Camellia is blooming and the weeping cherry has numerous buds. I think spring may be early this year. 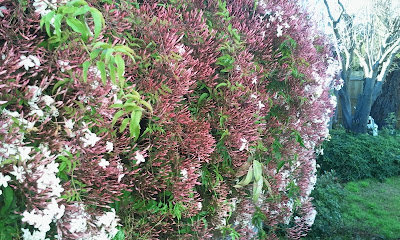 We had a top of 20 degrees, wispy wind and a sunny day encouraged people to be out in shorts and T-shirts today as I drove through the city. I saw people sitting on sidewalk cafes and bars taking the warmth after a cold winter this year - well when I say cold, we never reach those minus things. Brrrrrrrr, not for us.
So now the first signs of spring are upon us.
﻿﻿﻿
﻿﻿﻿﻿﻿
﻿﻿﻿
﻿﻿
Bit of an unorganised weekend but really pleased to feeling the onset of spring. I might even get a little more enthusiastic about getting up for early training rides. - Hmmm, we'll see. ﻿

Email ThisBlogThis!Share to TwitterShare to FacebookShare to Pinterest
Labels: weekends

Driving home from watching some friends racing at our indoor velodrome, I drove by the Collingwood Town Hall. Our early family grew up in this district and its surrounds in the late 1800s to the 1950s.

It was an area that thrived on manufacturing, especially the textile and shoe trade. Today these trades are virtually non-existent.
I took this photograph on my Samsung mobile phone. A friend of mine posts on his blog, exclusively on his iPhone - you'll see his blog on my side-bar.
Have to go now - it's almost pass my bed time.
Posted by Leon Sims at 10:32 PM 5 comments:

On the way to Confolens

It had been an awe inspiring week in the Dordogne but it was time to move on. Our next stop was Confolens via Limoges for a morning tea stop, and lunch. We drove the 40 odd kms to bypass Perigueux which was a shame as our "Rough Guide" told us that the original site was founded sometime around 400BC. Then came the Romans followed by the Germanic Barbarians. Later the city was affected by both the Wars of Religion and the 100 years War. We missed seeing its Medieval and Renaissance heart. The next 100 kms on would be our coffee stop at Limoges.
﻿﻿
I must admit that except for the coffee and the Brocante we might not have enjoyed Limoges but there's always hidden treasures in every village or city. The bigger the city the harder it is to find those treasures sometimes.
﻿ ﻿﻿ ﻿ 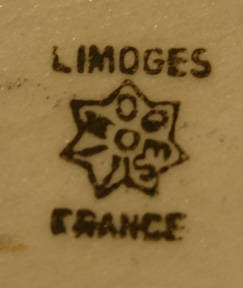 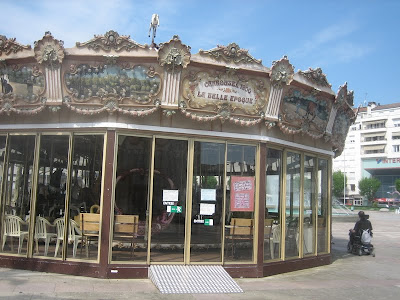 ﻿
﻿﻿﻿ ﻿﻿﻿
﻿We actually stayed longer in Limoges after discovering the Brocante and decided lunch there - the city started to buzz in the late morning and into the early afternoon.
It was still another 60 odd kms to go but we decided to let Tommy take us his way to Confolens and we are so pleased he did - he showed us some wondrous pieces of history that we may never have discovered - BUT more next Wednesday.
OK maybe a little teaser 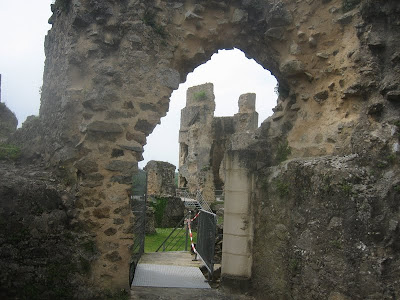 Driving home from work Friday night, I knew it would be a tiring weekend to come. Late nights with watching the exciting last three nights to the Tour de France and helping my son paint his bedroom were on the agenda.
Sue told me she was in a cooking mood, something that always fills me with anticipation on a Friday night.
Fish was on the menu and I couldn't wait to get home to open a bottle of white wine to compliment the fish.
﻿
﻿﻿
﻿﻿
﻿
﻿﻿
﻿Late nights were instore for Friday, Saturday and Sunday. Alp d'Heuz on the Friday night was "edge of the seat" stuff with Cadel having bike problems but his team waited and brought him back into the race at the important moment to limit any losses.

Saturday night with the time trial and Cadel lying 57 seconds behind Andy Schlek was always going to be the pivotal point - Cadel did Australia proud by not only making up his deficit but motoring to a commanding lead over his opposition to take second, only seven seconds behind the Time Trial winner Tony Martin from Germany.
﻿﻿
﻿﻿﻿
﻿﻿﻿﻿﻿
﻿﻿﻿﻿﻿﻿
﻿﻿

I did this little tribute to a nice bloke that just won this year's Tour de France. We are very proud of Cadel.
Posted by Leon Sims at 9:42 PM 8 comments:

Email ThisBlogThis!Share to TwitterShare to FacebookShare to Pinterest
Labels: weekends

Because - Moonlight Sonata - Inspiration or what!!!!

I loved John Lennon's music - He was inspirational in many ways when I was young.
Tell me, was he inspired by Beethoven when he was young?

Tune in Monday
Posted by Leon Sims at 7:46 PM 5 comments:

SHANE HOWARD (Goanna)
In the early 80s I had Goanna's first album - it was a time of change in Aussie Music. In latter years, maybe around 2000 I discovered Mary Black. She probably discovered Shane Howard at the same time. She also recorded a Neil Finn (Crowded House) song. Both Shane and Neil have enjoyed some recognition in Ireland due to her successes with their songwriting.

In 1993, Shane made his first tour of Ireland when Irish star Mary Black's recording of Shane's song, "Flesh & Blood", was a Top 5 hit there. He has since toured Ireland and Australia regularly with Black, who has recorded several of his songs. (From Shane's website)

This clip comes from a local Melbourne show, "ROCKWIZ" and at the end there is usually a duet. On this occasion, Mary Black was in Australia and invited to Rockwiz to perform with Shane.

Solid Rock was the first hit for Shane Howard's Goanna. He's one of the few Aussie Rock Bands in the 80s, along with Midnight Oil to write and perform songs dealing with Aboriginal Rights in Australia.

﻿It was on another early morning ride that I discovered Limeuil, a village perched on a limestone ridge overlooking the confluence of the Dordogne and Vezere rivers. There was more to meet the eye than what I saw on the surface of this quaint little village on the ride - but more about that later.
Back home after the ride, I said to Sue, "Do I have a surprise for you today, no not diamonds dear, but certainly a rough diamond." So after pottering around at home and then into Le Bugue for the morning email catch up with family, I drove Sue to Limeuil. You take a road that mostly follows the Vezere river until you get near the village (about 5 kms) but instead of following the lower road you take a right hand turn that takes you up a steep incline. I have to say that earlier in the morning it did take some effort to climb into the village on a single gear bike.

It was May 8 and as we arrived the villagers were slowly wandering up to the church. It was VE Day of course and French flags were flying on many of the Medieval houses of the village, some are quite large where others are minuscule as if they were inhabited by hobbits. The lawns and gardens of the village are beautifully manicured and you can see why it is rated as "One of the Most Beautiful Villages of France".
As the villagers wandered up to the church I couldn't help noticing that they were all older people going to pay their respects to the fallen. Maybe there are no young people in the village!
Limeuil's website tells us that this limestone outcrop has been inhabited since prehistoric times and artifacts dated from 10,000BC have been found. The village has a very authentic Medieval feel about it with its three fortified gateways and the ruins of the castle and ramparts.

Travelling through rural France in your own car has its benefits and for us, travelling on a guided tour with other tourists is not to our liking. You miss these rough diamonds, the hidden treasures that are not on the tourist bus route. Its also nice not to hear another English accent.
And its even better on a bike.
﻿ ﻿
﻿
﻿﻿﻿﻿ ﻿﻿﻿﻿﻿

﻿ ﻿﻿﻿﻿ ﻿This would be our last full day in Le Bugue - the next day we needed to be in Confolens for a two night stay on our way to the Loire Valley. Along the way we stopped at Limoges and followed the path of Richard the Lionheart, and then stumbled upon a ruined castle. The ruins were deserted, that is until nature called, but that's another story next Wednesday.
Posted by Leon Sims at 5:45 PM 4 comments:

Our Village is Changing.

Mentone when we moved in during the early 1980s was where you went to buy clothes, hardware, groceries and go to the local bank or Milk Bar. Things have changed. The ambiance is changing. We don't know if its good or bad.
Just near the railway station is a multi-level apartment building going up with shops and cafes below. It looks like an exciting project but will we like it? More people, more cars, making it harder to park at our local ﻿village shopping centre.
In our time the good changes have been the various cafes and restaurants that have opened. The clothing and furniture shops have closed down because the people go to the huge shopping centres. If you need materials to renovate your home then the local hardware shop has been replaced by the huge Bunnings renovation warehouses. Maybe its good but I do feel sorry for those local village stores that have had to close their doors.
﻿﻿
﻿﻿The businesses that have closed have been replaced by many cafes and restaurants which is a bonus. Looking for a Sunday brunch - no problem in Mentone, maybe a coffee and a read of the local newspaper, several choices there. What sort of cuisine to you prefer, Asian, Eastern, Italian, Indian - its all there in Mentone.
﻿
﻿
﻿﻿
﻿﻿
﻿﻿ I guess we'll have to see where the next few years take us - our choice is to roll with the changes or move. This is a choice we will contemplate over the next few years as we look at backing off from the fast life.
Posted by Leon Sims at 7:32 PM 6 comments: