Wednesdays in France - We've been invaded. 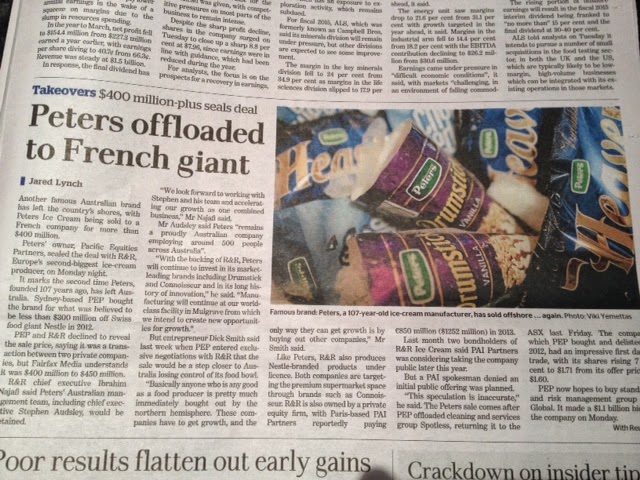 I opened the financial papers of the AGE Newspaper this morning to find that the French had once again made an attempt to invade Australia.

The French missed by one day to colonise Australia as the English beat them to it. They've been trying to invade us since. French cars, French cuisine, and now they've bought our Australian Iconic Peter's Company, the makers of Drumstick and Heaven Ice Creams.

I think it's time to get even and start harvesting those nasty toads from the top end of Australia and sell the thighs back to the French, then there's all those slimy snails that are eating our cabbages in this wet autumn weather.

Things change
Our suburb is changing in Mentone.
Apartments are going up everywhere.
Around the bay towards the city is,
Middle Park, and Albert Park.
Quiet leafy wide streets that from the front of the houses,
it doesn't seem to have changed since its early days.
I had the need to visit a friend over the weekend,
and I reflected on the architecture and its preservation.
Here are several photos lifted from the internet,
to show its past. 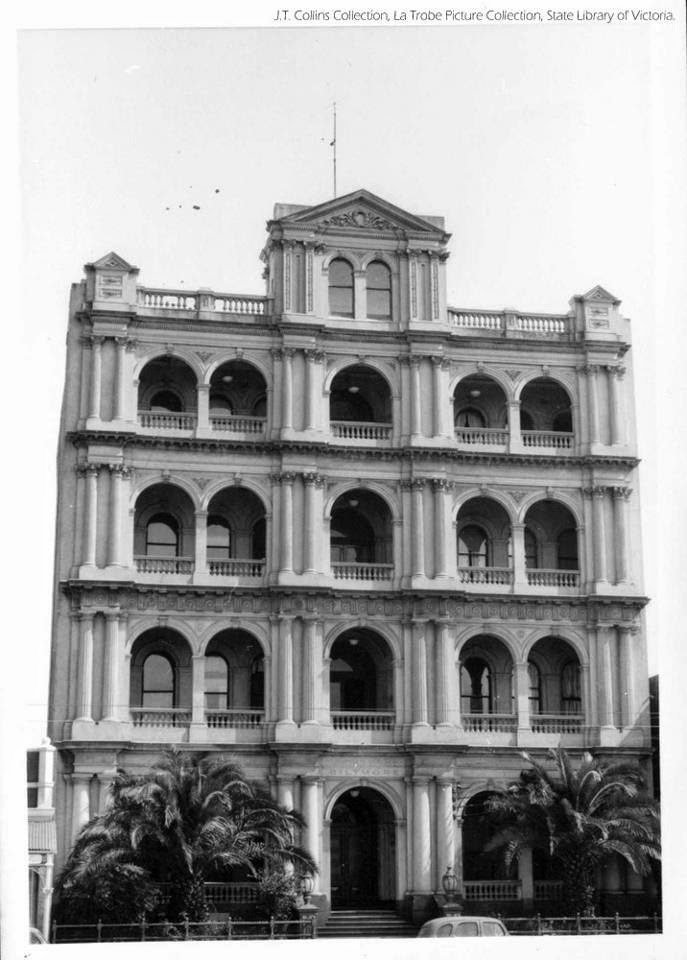 I often stop for a coffee in the shopping area across the road from this building. 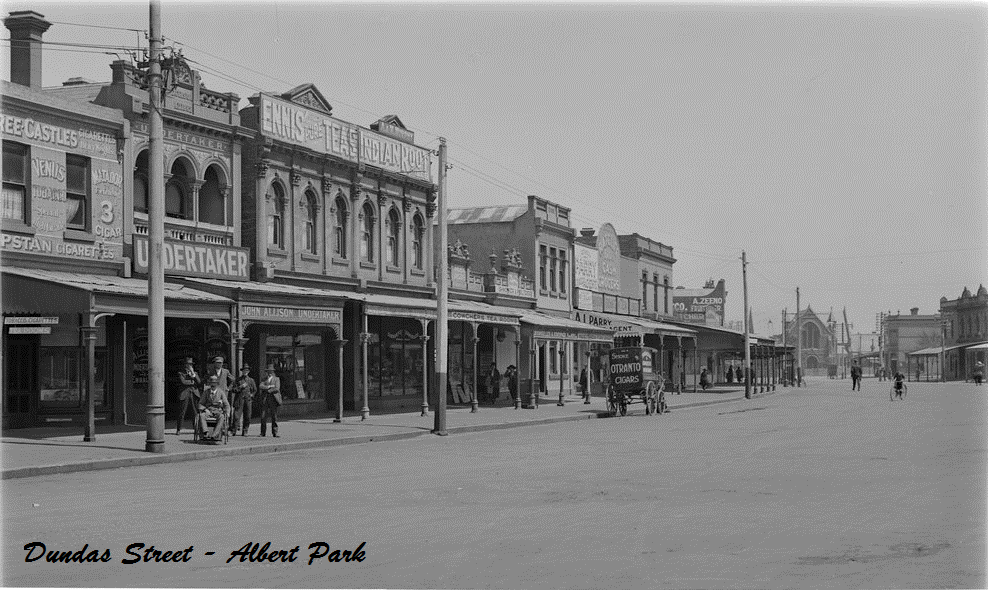 A lot of forthought in the design of the streets when you consider it was in the mid 1800s when the suburb was laid out. 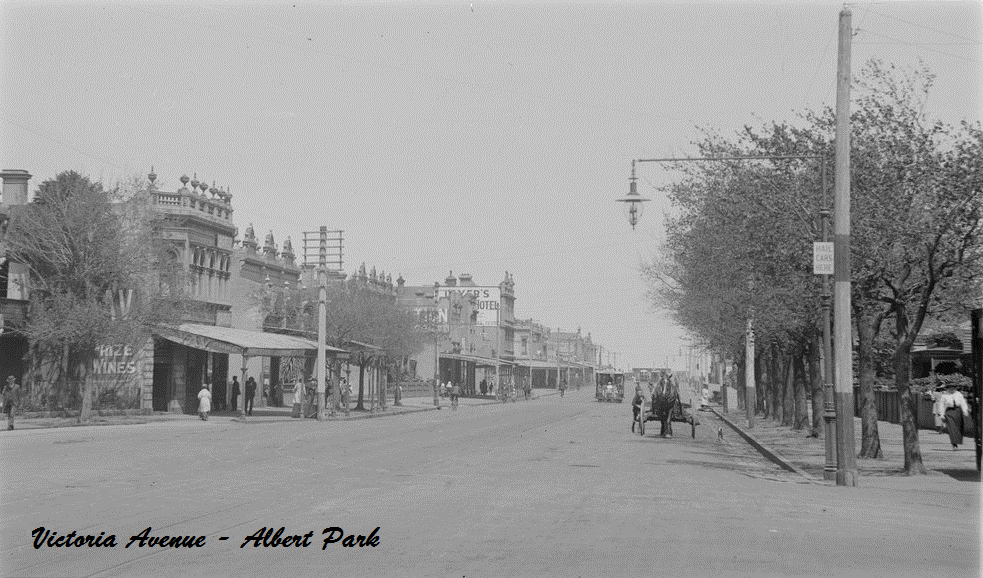 Today's traffic copes rather well in the wide streets of Albert and Middle Park. 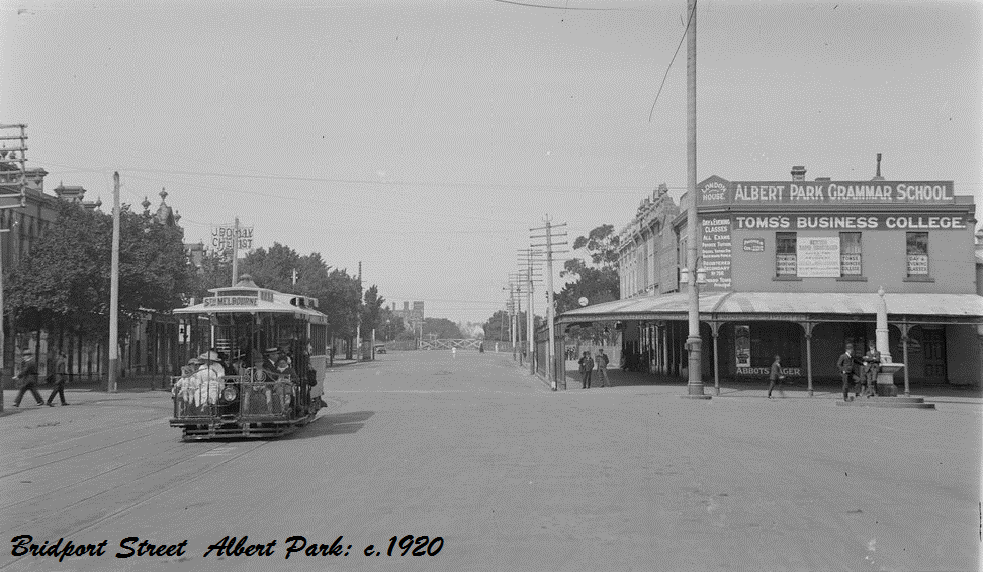 Cable cars were a major part of Suburban public transport. Today the cable cars have given way to modern electric trams. 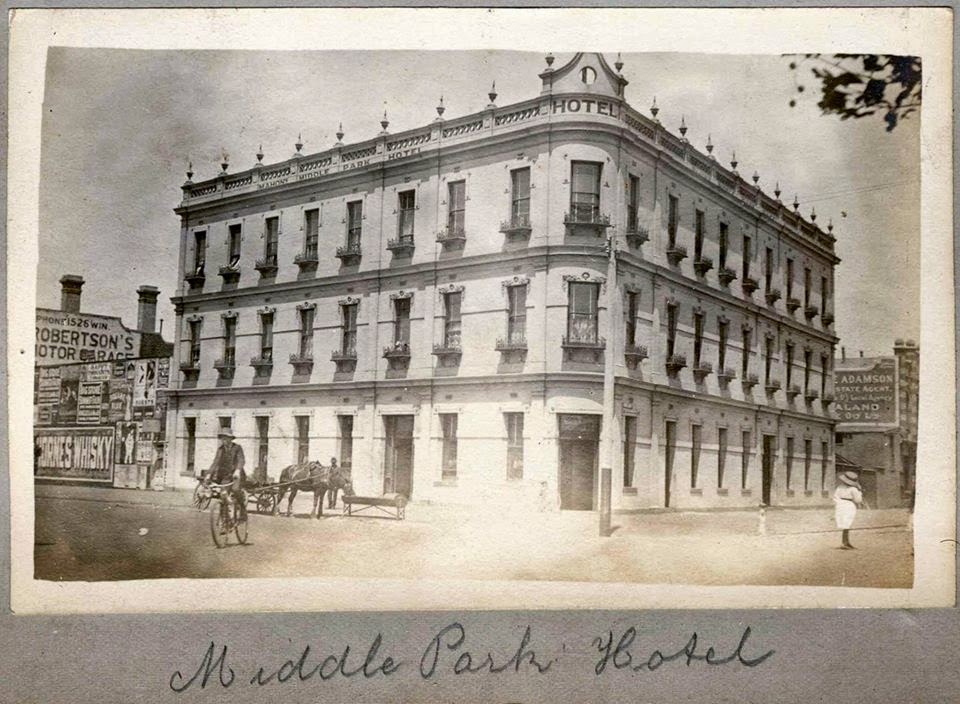 Only recently I had the opportunity to visit the Middle Park Hotel for a social glass or two of wine. 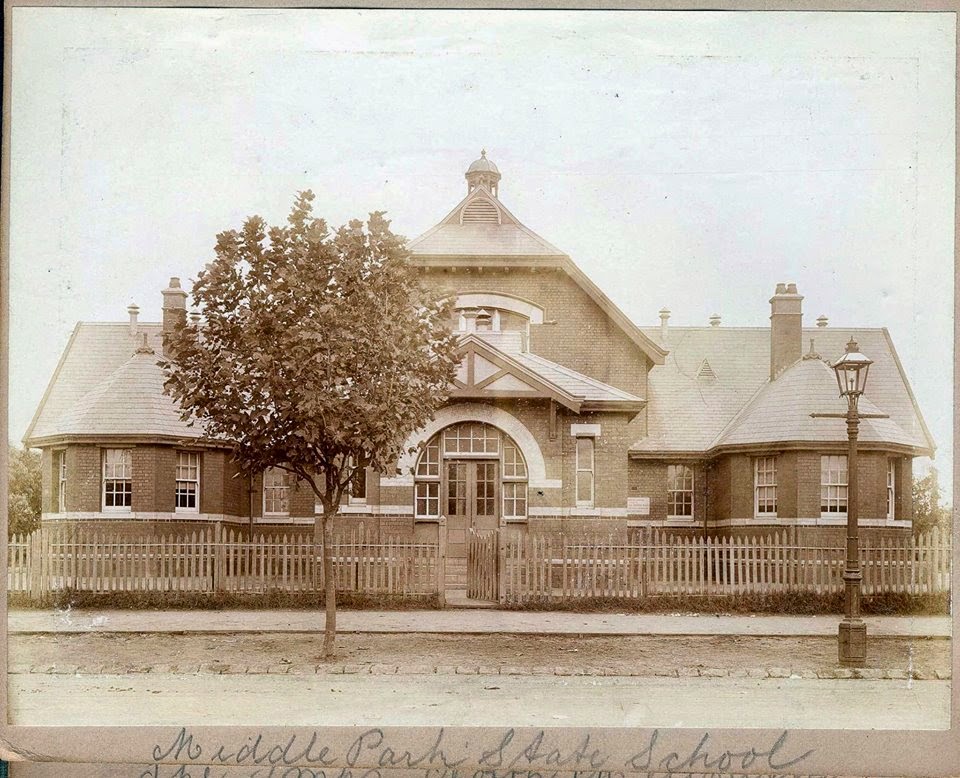 I know I've driven by this building many times - if I get the chance, I'll do a "Today Photo" of this one also.
Posted by Leon Sims at 8:50 AM 1 comment:


In our driveway today are more modern French cars - a Peugeot 307, the Citroen C4, oh yes and our year 2000 Citroen Xantia which we just can't consider letting go.
We even have a wonderful French mechanic who understands our obsession.
Do you know that we've had some Aussie mechanics that refuse to accept past requests to work on our Citroen Xantia.
Posted by Leon Sims at 9:52 PM 1 comment:

Email ThisBlogThis!Share to TwitterShare to FacebookShare to Pinterest
Labels: cars


Yep, it's another Saturday night and we had friends around for dinner, that is both couples are friends of ours but not with each other. We enjoy bringing people together who don't know each other - its fun.
So while you read this post - enjoy a bit of Sam Cooke and, It's another Saturday Night.

Sue has been cooking up the perfect storm during the day while I clean ( Sue says..read that as putting his things away from the lounge room!) and vacuum, etc under instruction.
Oh, yes and I bought the wine for dinner - some sparkling, a couple of Italian Pinot Grigio and a lovely South Australian Coonawarra red blend of Cab Sav, Shiraz and Merlot.

2nd Course - Cauliflower Soup. Served it with a little swirl of sour cream, some parsley and crispy prosciutto. Was meant to be the crispy beetroot shreds you see in the photo BEFORE I decided to re-crisp them in the oven. That of course was before I forgot about them. Ahem...moving on...

3rd Course - Bill's Coq auVin with scalloped potatoes, beans and carrots The Bill is Bill Granger, an Aussie chef, pretty widely know now I believe. This version is a lot lighter than the original. Cooked in white wine with the mushrooms which were cooked separately in butter and a huge amount of garlic before being strewn on top. Best to just associate with fellow diners after.

4th Course - Chocolate Souffles. Little ones, with a chocolate and honey nougat ice cream. They were good. I love souffles! Do you?

A very pleasant evening with friends to christen our new dining room table. (That's new as in old, old,old. At least for Australia)

PS *whispering* Leon wasn't very well this morning and it had nothing to do with my cooking.


As we are coming to the end of autumn, Melbourne is experiencing some lovely weather. This morning we woke to a low of 16 and a high of 20 and while I write this at 6.00 PM, it is still hovering on 19. Monday in Melbourne will see us move from a low of 14 increasing to a sunny 22. Its been great cycling and working in the garden weather which looks to be continuing through the early part of the week.
Posted by Leon Sims at 7:40 PM 4 comments:

Wednesdays in France (and Italy) returns

Its been some time since we did a Wednesdays in France but we are now only four months before we take off to Rome for 2 weeks in Italy and 8 weeks in France. This maybe our last trip (our 6th) back as retirement looms and income dwindles. Who knows what the future holds, there's always the lottery but I'm told that you actually need to buy a ticket and I'm not a gambling man.

We arrive in Rome at the end of September and travel back to Tuscany for a week and then off to Bologna and then to the lakes district for a few days. Then our travels take us back to the Loire to meet up with the locals. I will again have a bike with me. Not one of those modern carbon things that you can pick up with your little finger but a steel framed bike from the early 80s. One of the reasons to return to Tuscany (last time was 2006) is to ride the classic cycling Gran Fondo "L'Eroica". We are joined by a group of close Australian cycling friends and it should be a real hoot.


Not long now before we return to scenes and friends from past trips.
Posted by Leon Sims at 10:35 PM 3 comments:

Autumn is turning to winter in Melbourne, our home by the bay and the mornings are chilly with fortunately clear sunny skies predicted for this week. In recent weeks the days have been very wet and the grass is green and long in our yard. Leaves of autumn colours wait to the weekends when I get to put them in the green bin.
I'm not sure where time escapes and I find that while I sit here at 10.00 pm that I haven't posted for a week and even more disappointing I haven't caught up with our favorite Blogging friends. Why is that?
There's a few reasons. Firstly I foolishly started a Face Book Page called the Cycling Scrapbook.
It was a conduit to the Blog I started by the same name. I love researching and writing on subjects of a historical nature and what better subject than for my passion of cycling.

Well let me tell you that this Face book page has become a monster - over 3000 members over the last 8 weeks. People throughout Australia and the world have reconnected after many years of having lost touch after retirement from the sport, but enough of that!!!
Check it out here: https://www.facebook.com/groups/1395214740743083/

Sue and I have spent time of preparing our house for sale within the next year or two. You may remember that we started with the bathroom and then our bedroom. Well I reached burn-out and we decided that we would get the professionals in to paint our kitchen, family room and laundry. We've gone for that basic non-offensive look of USA Antique white highlighted by gloss white. Whoever eventually buys our home will have a clear pallet to infuse their own personality into the place we've called home for the last 30 years.
So, what's next? - we move into the front rooms. These rooms retain the authenticity of a 1929 Californian Bungalow house. They will though be transformed into the same light colours shown here. The carpet goes and the beautiful Baltic floorboards will be sanded and polished - it seems to be what prospective buyers look for these days from what we've seen in the real estate websites in our area.


And what then when we sell? - Well that is the question. We need to get the place ready first.
You might have some suggestion - we have an open mind.

What Is Old - Is New Again

Sometimes I might just go for a ride on my bike for no other reason than to discover my local surroundings. A car is good to get to places quickly but a bike opens up new experiences. You can look down lane ways, driveways, and shop windows. This post is about two unique windows in today's large shopping centres. 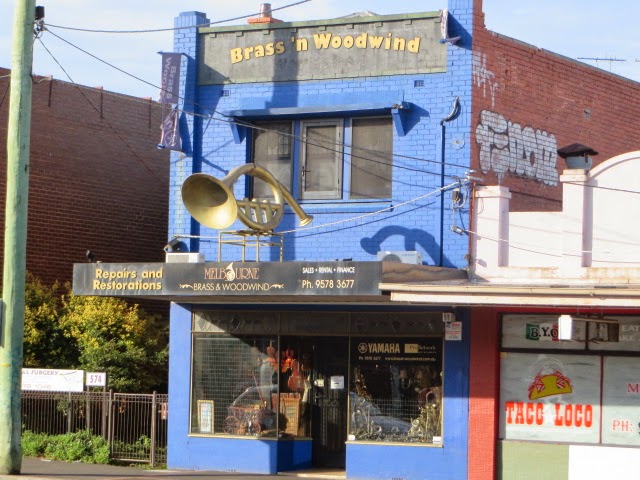 There are dwindling special shops these days - we are a disposable society. Something breaks, throw it away and by a replacement. But what if you don't want to throw out a precious possession and it needs to fixing, like a spring loaded clock or a brass or woodwind musical instrument.

Here's two shops I found about 5 kms from home that I knew existed but because I was in the car, I never took the opportunity to discover them more closely. The shopping strip is basically in the doldrums but these two business obviously have a far reaching reputation that has allowed them to prosper.

What is old is new again. 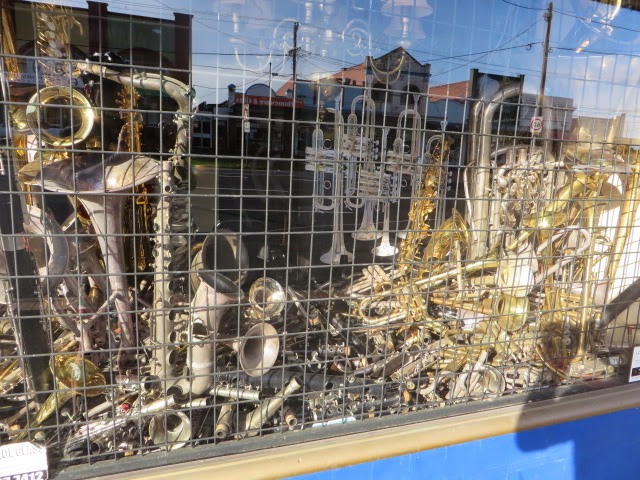 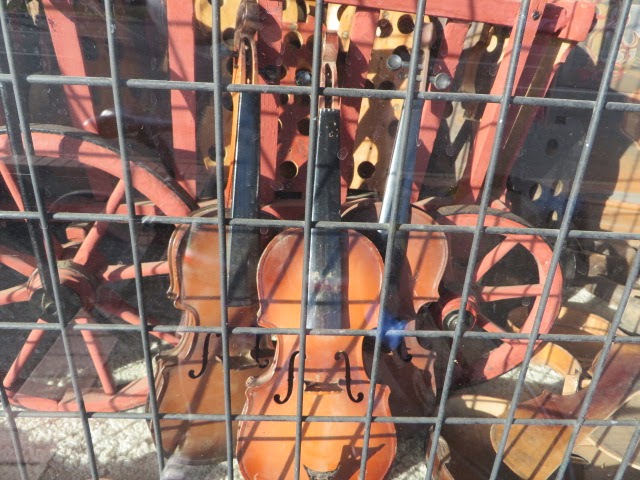 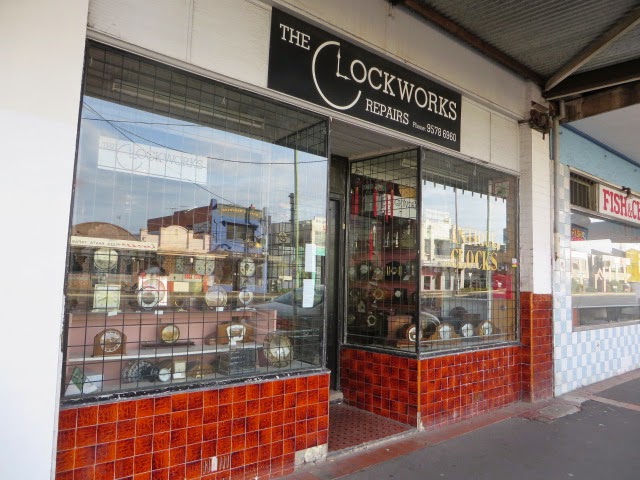 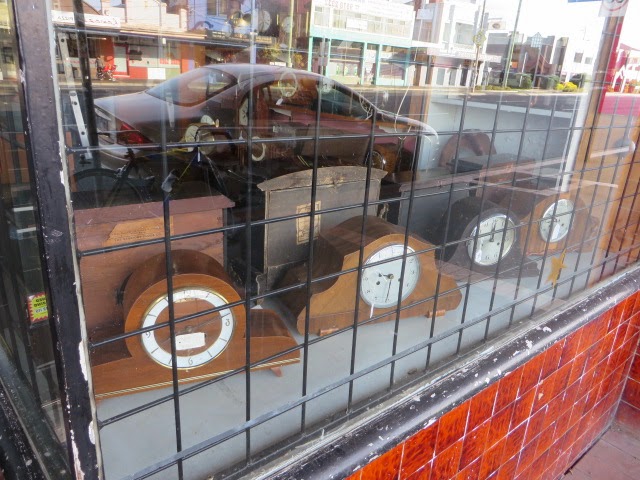 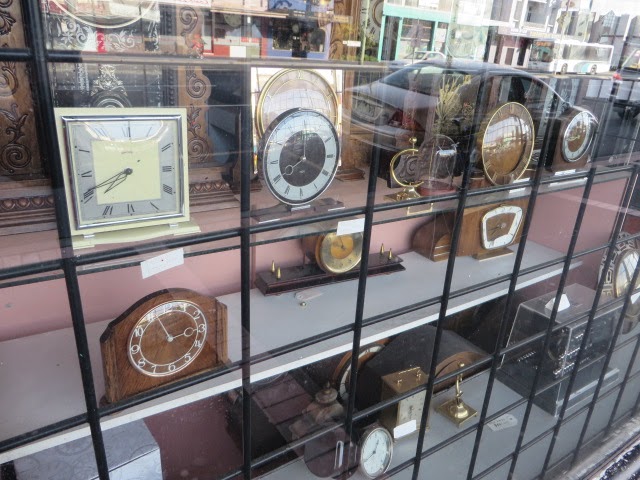 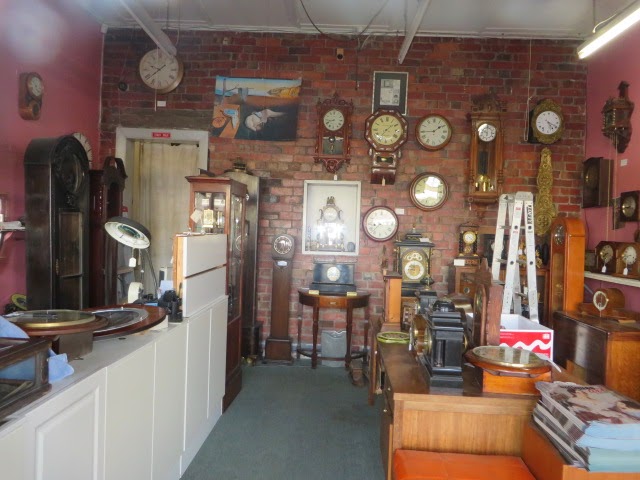 Sorry about all the reflections in my photos - it was a crisp sunny autumn morning for my ride.

What wrong with this picture? 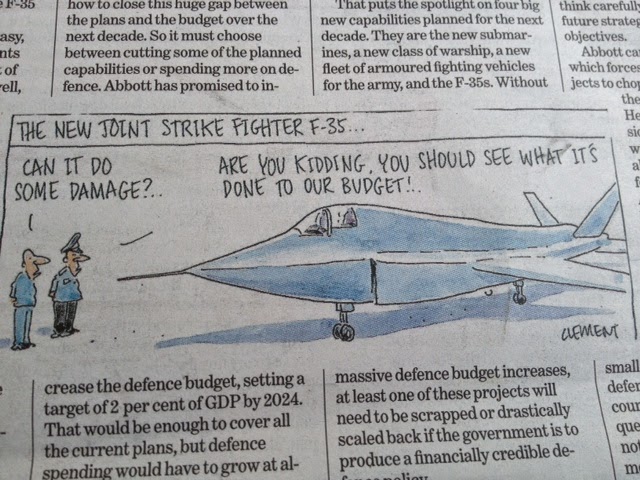 While Australia's new federal government is about to hand down its first budget there is talk that the "age of entitlement" is over. Predicted cuts to health, education, and pension are possibly on the drawing board to cut the budget deficit.