We bought the home in 1982. Its been through several incarnations over that time. This one will be the last in our ownership. With a little over 30 years passing by, I thought it was a good time to reflect over the changes that our home and life have experienced. Our home was a State Bank Californian Bungalow house and when we bought it, it had very few changes. We were fortunate to have bought a very original and sound home. We consider ourselves to be the second owners as the people we bought from were there less than two years and did nothing on the house. The house was built by Mr and Mrs Clarricoates in 1929.

Let's start with the kitchen. Originally it was a very small area, no bigger than the bathroom on the other side of the wall. There was a brick chimney which the gas oven stood in. The brick chimney most probably housed  a wood fired stove beforehand. The bricks today pave the outdoor living area. We cleaned everyone of those bricks before laying them.
We decided to open up the area for family living with an A shaped room to add light and height. Sue could cook while still being part of the family. It's very much a coming together with the hub of the day's living.
Being both a cooking and living area, it has created an interest to our two boys, Andrew and Mitchell in cooking where occasionally they take on their own culinary adventures.

We will move into the past with other rooms over the next few posts as we draw closer to the end of our last and final changing of the house, no "home" for a new young family to make a home for themselves.

Te Deck gets its new clothes.

I sit at a desk in front of a computer at work most days - hey, I do that at home, what am I doing now? What did we do before computers?

A friend popped in today as I was finishing off some work on the house - more about that later. He mentioned that his father passed on a medal that he was awarded for completing the famous and historic 165 mile Warrnambool cycling road race. I looked it up on a site called TROVE which has digitised past Australian newspapers.
So there, on the spot, I was able to offer some news of the race his father rode in 1931. My friend came around to purchase a book I self-published on motor racing. Back then I spent hours sitting at the Melbourne Library searching through microfiche of old newspapers when I was researching the book. Today I can sit in the study doing the same thing. Amazing isn't it?

So when it comes to working with my hands, its almost like therapy and mind relief.... Those that have been following the Blog full well know that every weekend is taken up with work on our house to put on the market later this year. Our house was built in 1929 and the terracotta roof tiles had 86 years of moss and grunge. Our son Andrew who supplements his income by working with a friend who restores roofs decided that they would surprise us by cleaning our roof last week. It looks like new. In two weeks we have the floor sander coming in now that we have finished painting those rooms.

But I digress - this weekend, we bought the materials to stain the deck - October Brown they call the deck oil and it needs two coats. Today I did the 1st coat. We like the way it is coming along. 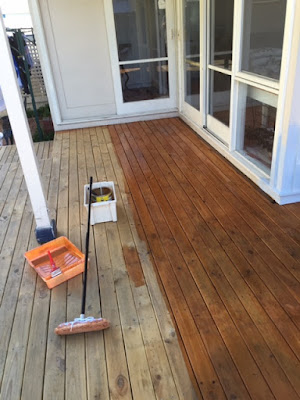 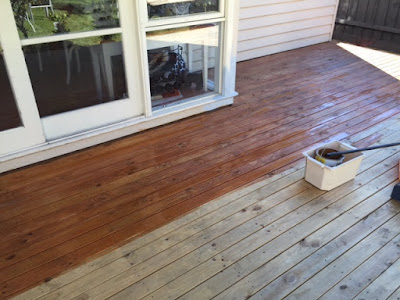 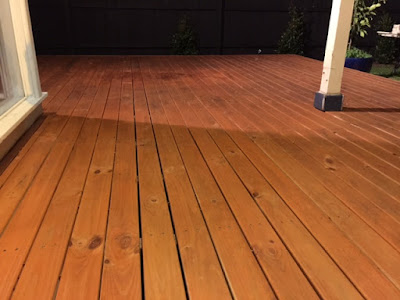 I also completed the painting of our side fence today however I did want to get on to the other side border fence but as I was working away, neighbours would stop for a chat which is really nice but it did slow progress. I think they are following our progress with interest. We are blessed to have good neighbours, many that have been in the street as long as us.

No food blog this weekend - we had takeaway tonight!


Oh well, there's always next weekend to catch up.
Posted by Leon Sims at 8:02 PM No comments:

Friday on my Mind

It's been a couple of of months since I transitioned to a four day week. The first few weeks I almost felt guilty. Now I'm feeling comfortable. I look at emails and answer the important stuff if I care to. I even turn my phone to silent.

I ride with my friends early in the morning, I have time with Sue, I do projects on the house and I'm starting to feel slightly relaxed. What does it feel like being totally retired - I think this is a world that is still a little way off but until then, Friday is always on my mind.

Email ThisBlogThis!Share to TwitterShare to FacebookShare to Pinterest
Labels: friday

Time for the Garden

It would seem that our Blog Posts are centered on the house renovations - it's what is taking up most of our life this year. There's so many projects on the go at the moment, I'm not sure if I'm Arthur or Martha!!!!

My Project Manager - that would be Sue, suggested that now that I have completed painting one side of the boundary fence, it was time time to buy plants for the garden beds. The colour of the fence was in "Black Caviar", named after a very successful Australian Thoroughbred mare. She never lost a race in her career. Plus she was gorgeous (Sue)
SO! Today we took a visit to a local nursery, plants not children. Diacos is in the back blocks of our local area where the early market gardens took advantage of the rich soil that also is where our house sits. The soil is so rich that I can feel my finger nails growing as I run my hands through the soil.

We are actually enjoying the transformation of our home of 30 plus years, especially when friends arrive and help with advice. Next weekend will see the front fence framework have some of the restored pickets attached. In two weeks time the floors get sanded and varnished in a low sheen. We can't wait. The furniture can then be moved back into the lounge and dining rooms and we can start enjoying the fruits of our labor.

I think its Wednesdays in France again.

Its been a week since we last posted - its been a long week.We've had a friend that passed away during the week, a good friend in Paris - a cycling friend. We also had a good friend here in Melbourne who lost her father. As we grow older these things will happen around us - its inevitable. Live for the day.

As our regular readers know, we enjoy entertaining and we are in the midst of renovating the house to have the house ready for auction so this post is about both.


And now for my Renovation Post - Last weekend my "Chippy" mate Greg completed the posts and rails of the front fence. My job now is to cut the existing pickets to length, sand and repaint. This should save a large amount by using the old pickets. Most were in good order which is saying something considering I built this fence 25 years ago.


Due to Lizzie's birthday - in Aussie we celebrate the Queen's B-Day in June - with my Friday off and the Monday celebration it gave me four days on the house renovations. Back to work at the office tomorrow.
Posted by Leon Sims at 8:48 PM 2 comments: