The world has changed!

When was the last time you bought milk in a glass bottle - you probably purchased it in a carton or a plastic container that clogs the bowels of the earth. I remember collecting discarded soft drink and beer bottles for pocket money. (probably bought a 10 pack of fags with the money) We had a recycle style of life back then when we repaired broken things rather than replacing them with new. 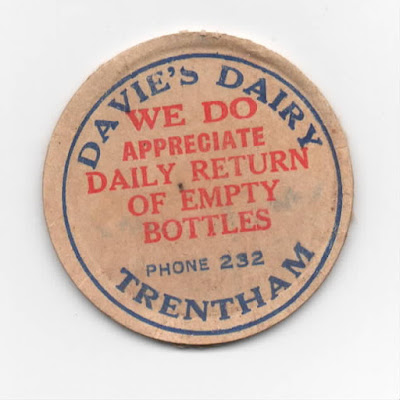 A lot has happened in one week.

Although we didn't mention it on the Blog, we reported on Facebook that Sue took a tumble and looked like a black eye and sore back muscles, turned out to be torn muscles and worse still, two fractured vertebrae. This all happened four days before heading home from Paris. On arrival Monday night, she was in so much pain that we had her transported by ambulance to the Royal Melbourne Hospital where the factors were discovered by CT scan. Its been over two weeks since the fall and a week since coming out of hospital.

Today as I write this we have a "Celebration of Life" tonight for my father Jack who passed away while we were in Belgium. He was 96 - a very good innings although he was striving for a century - not out.

On to more brighter topics. The weather is miserable - no, not really. We are having a good dowsing of rain and the rural districts can do with it before the summer heads our way. It will fill the reservoirs and dams - the fields will turn green....

We have a creek that runs behind our block and in summer this becomes dry. Since the rains came, it is now a full flowing babbling brook. The ducks are enjoying it as well as the small ponds in the lower levels of the fields. Even the kangaroos are enjoying grazing on the soft moist grass. 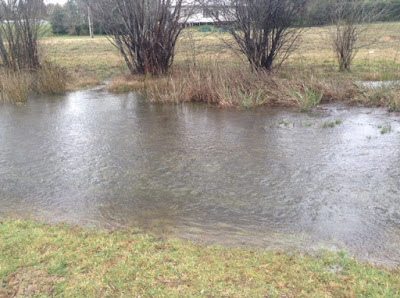 After tonight's tribute to Jack, we concentrate on getting Sue well again and getting back to normal life in Trentham.

REIMS and the Cathedral


It was time to move on from Belgium. We've been awfully mundane in our travels by staying in the rut of France and Italy (7 times now). Having said that, travelling back into France, the difference was extremely noticeable for us. Not long after passing the border of Belgium and France we turned into the fortified village Rocroi situated in the Ardennes region on the way to Reims.
I'd read about Rocroi in the DK travel books however we've never been in the region previously. We really on just stumbled upon the village as we do in our past travels be driving the non-toll roads. We are not cheap by avoiding tolls and in fact rich by the discoveries that come our way.
The village is one of the France's group of most beautiful villages and it certainly didn't disappoint on our visit. It is in the northern French Ardennes region. We took in a glass of wine outside a small bar and as we sat down an elderly gentleman in a wheelchair started a conversation. He told us that when 58 years old while riding his bicycle he had a very bad accident that put him in the wheelchair. We talked of cycling and in particular the Tour de France and the Australian riders of which he quoted many familiar names. We shouted him his beer.
It was time to move on to Reims. Our reason to take the route to Reims was to see the cathedral in which many French Kings were ordained. The first king of the Franks, Clovis was baptised in this cathedral. Joan of Arc after defeating the English brought the Dauphin of France here to be crowned as king. Its an extraordinary cathedral and we've seen many in France including Notre Dame of Paris, Poitiers, Chartres to name a few. The restoration process is also amazing by the skilled craftsmen reproducing the intricate stone sculptures as can be seen in the photos below. 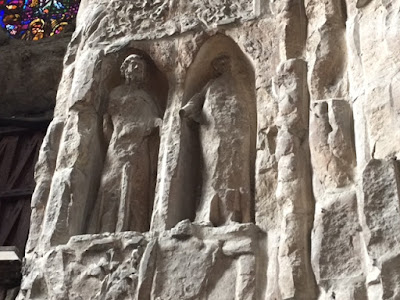 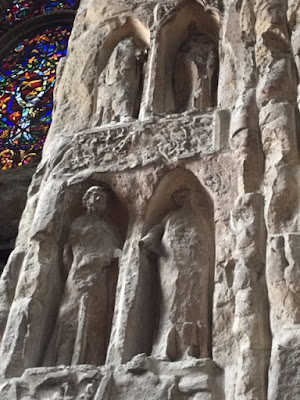 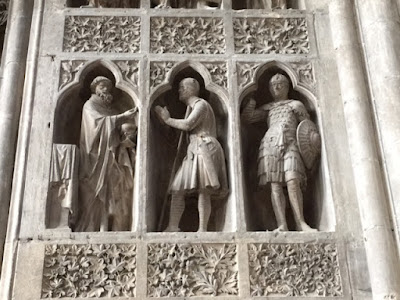 The statue of Joan of Arc looks up towards the Reims Cathedral to where she brought Charles, the Dauphin of France to be ordained as King of France after the defeat of the English at Orleans. 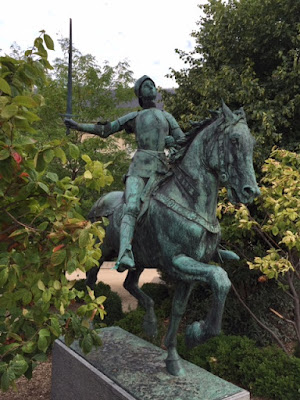 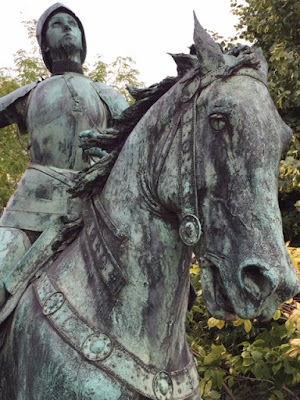 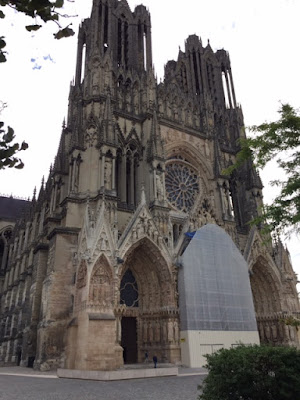 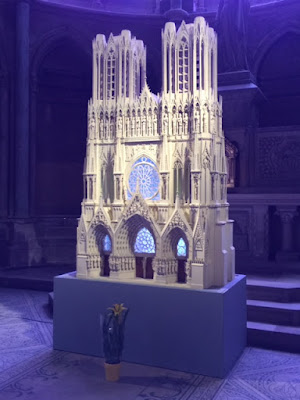 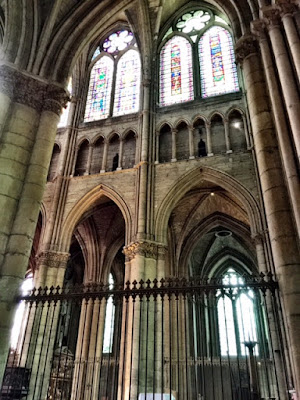 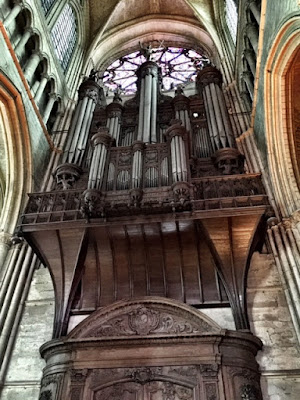 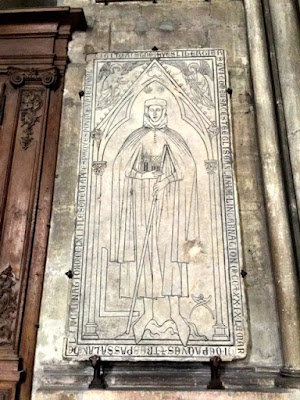 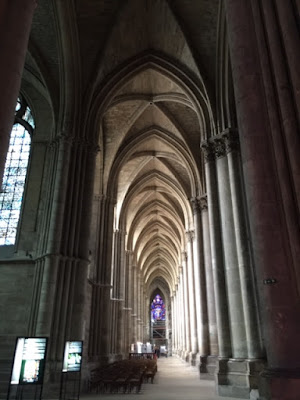 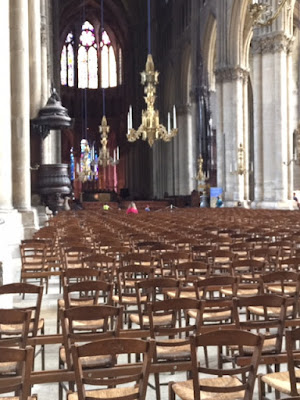 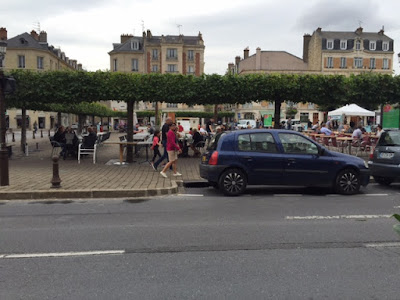 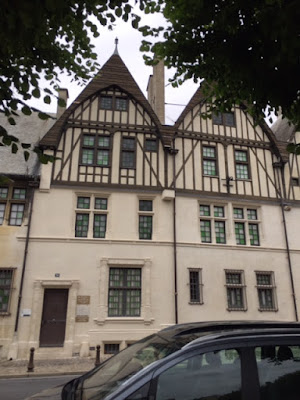 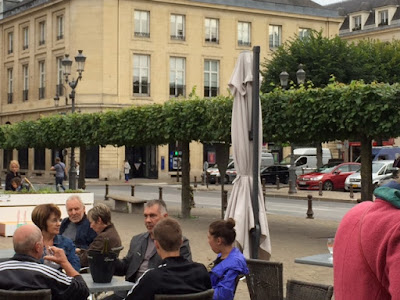 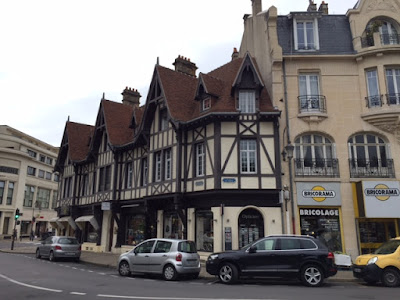 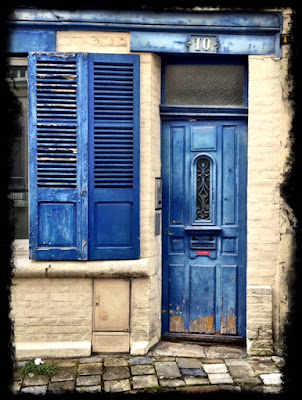 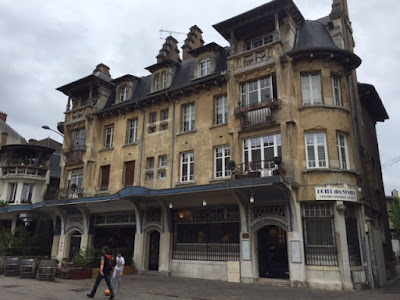 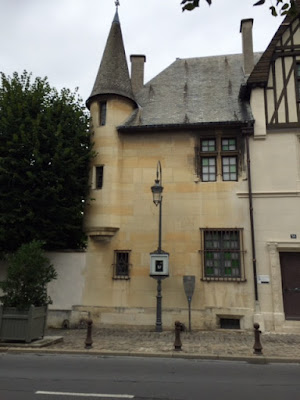 After Reims, we moved on to Fontainebleau and then Orleans as overnight stays to visit friends who live in the Loire. More to come yet.
Posted by Leon Sims at 8:02 PM 5 comments: