Sorry to have missed my usual posts - I lost my Mojo!!!!!

Yes, that's it, I knocked off work and just stopped everything. Blogging was one of those things that took a back seat. 2012 has been one of the most busiest working years I can remember in my 16 years with the company. I guess I shouldn't complain - many companies are finding that the economy is slower than previous. It will be interesting to see how our retail sector performs after all the post Christmas sales.

So what have we been up to since December 21st - our last post. Shopping, cooking, eating, drinking, riding and relaxing.
Oh, yes and enjoying family. Our son Andrew is home from England for Christmas. Our other son has a friend he met in Montreal staying with us until the first week of January.

I thought I would just post some pictures of the last week.
My first day of rest involved - naturally a ride on my favorite piece of road with what I believe meets the expectations of any place in the world - sometimes because I ride this piece of road several times a week, I take it for granted.
So on the ride were pixies, Santa, elves, and they all looked like they were having fun. I have to say that I'm a little inhibited when it comes to dressing up and riding in public so I was a quiet observer.

Our big festive meal is Christmas day. However with our Canadian friend staying and unable to have Christmas lunch with us due to an invitation from other Aussie friends, we decided to treat him to a Christmas Eve meal.

It is now December 27 and the New Year draws close. New Year resolutions are being formulated by many. What are ours, I hear you ask?
There is only one resolution and that is to enjoy family, friends and life. Oh yes, and to get back to regular blogging.
Hope your festive season has been as enjoyable as ours. Tomorrow is Funky Friday..........

OK, I have to admit to being a bit of a scrooge bah, humbug sort of Christmas guy.
BUT over the years, Sue has started to wear me down. My resistance to turning my back on all this Christmas cheer is slowly fading where I am starting to enjoy the festivities. I think this all resulted from an early childhood experience when I chopped down a very large branch from a council grounds conifer. I dragged it home across a busy highway and was promptly scolded for such an act of vandalism. I just thought it would be nice to have a real Christmas tree at home - that was 56 years ago.

Sue couldn't understand my minimalistic attitude towards the festive season, but there it is, a hidden childhood drama released in adulthood.
I'm mellowing and now after releasing this inner most dark experience here in our blog, I feel I can enjoy Christmas without that bah, humbug attitude that I've harboured for so many years.

What are you doing at Christmas?
Posted by Leon Sims at 10:51 PM 13 comments:

A Purple Haze in our Garden

After a few days of 30 plus degrees, the rains came last night and the Jacaranda tree lost some of its purple blossom on the green lawn of our back yard. 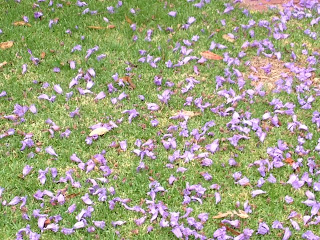 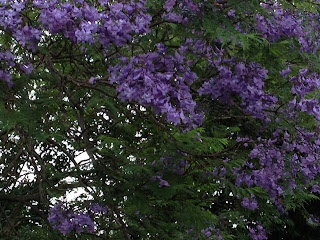 As I ventured out the front door on my way to work, the front yard was also wearing its purple ensemble. 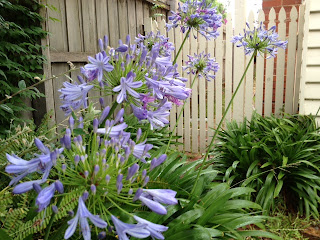 We've heard the Jimi Hendrix PURPLE HAZE so many times over the years - try this for someting different.

Paris for Two Weeks and my 60th.

It was time to move on after only three nights in the Loire visiting friends. Travelling is a wonderful experience seeing the sights of another country. Meeting and greeting friends along the way only enhances the experience - maybe this is why we keep returning to France.
We took a ride in the Citroen called Celestine with her owners, Susan and Simon, enjoyed lunch with Walt, Carole and Mikee, and also saw fellow Blogger Jean's village although we missed seeing her.

For my 60th birthday, Sue had organised two weeks living in an apartment in Paris. It was off Rue Montorgueil and was one of those pedestrian only streets. I would be sent down in the mornings by Sue to buy baguettes as she was brewing coffee for breakfast. Un baguette sil vous plait Madam was the extent of my French, oh yes, and Merci. What the hell, the response was a smile and "you are welcome" in english.

The area was perfect for Sue - it allowed her to wander down into the street to buy produce for our evening meals. The kitchen in the apartment was more than adequate for Sue's culinary skills.

Our next lot of posts will be about two weeks of living in Paris - cooking, eating, drinking, sight seeing and yes of course, riding my bike with friends in Paris.

We drove my father Jack to the airport in the arvo to catch his plane to where he lives with my sister in sunny Gold Coast, Queensland. A slight detour on the way home took us to the Prahran Market to buy duck and a few other ingredients for that thing that Sue does sometimes. A lovely bottle of wine, a Pinot Noir from the Yarra Valley suited the duck perfectly. We bought this from our favorite wine shop, Dan Murphy which has a great selection of worldwide wines. We selected the Pinot from the Yering Station label.
The Yering Vineyard was the first to be established in Victoria. It's maybe 50 to 60 kms from home.
Here's a link to their website;
http://www.yering.com/index.php/

Yering Station HistoryVictoria’s first vineyard was planted at Yering Station in 1838. The Scottish-born Ryrie brothers ventured into the Yarra Valley as they moved their cattle south from Sydney. Taking up a grazing license of 43 000 acres, they named the property ‘Yering’, its Aboriginal name. The Ryrie’s planted two varieties, the Black Cluster of Hamburg and a white grape variety called Sweetwater. During the early 1850’s they returned to Sydney and Paul de Castella took ownership of Yering Station, developing the property from what remained primarily a cattle station into a landmark of winemaking in Victoria. Paul de Castella arrived in the Yarra Valley after traveling from his home town- the Neuchatel district in Switzerland. Many Swiss settled in the Yarra Valley around this time due to the sympathetic presence of the Victorian Governor’s wife, Sophie La Trobe, who also came from the region. Without them, the story of wine in the Yarra Valley would have been very different.During the 1850’s Yering Station began to take shape. Paul de Castella extended the vineyards and cultivated the varieties with new cuttings imported from France. The winery was built to accommodate brand new equipment imported from the 1859 Bordeaux Exhibition in Paris. A new house and garden were constructed and an avenue of 330 elms was planted along the driveway to welcome De Castella’s bride.


Just a heads up on the different colours - I may have mentioned that Sue talks in green..........
We arrived back home to unpack and the first thing was to pour a glass of wine and relax - no one home but us two oldies. YES!!!!!

Sue's menu for the night is always my favorite and we've posted on it before but it was a winter meal last time.
This time duck breast and crispy potatoes cooked in duck fat had a summer edge to it.
A salad joined the duck this time - the salad consisted of watermelon chunks, mint leaves and feta cheese with a dash of balsamic to tart it up a little. It's a bit of a twist on a Nigella Lawson thing but she uses black olives where Sue chucked in the feta. On a balmy night in Melbourne's summer, it was very refreshing.

There was much more to our Melbourne Weekend but being home, just the two of us on a Saturday night while watching for the fourth time, the West Wing DVD series might sound boring to some, but to us, it was so relaxing.

Anyway its time to get ready to go out and meet friends for a BBQ and to help celebrate another 60th birthday - Oh, we are social butterflies... Back to reality and work tomorrow.

With apologies to Diane in France who has crappy broadband.
Posted by Leon Sims at 4:59 PM 5 comments:


It's summer in Melbourne - Well this weekend 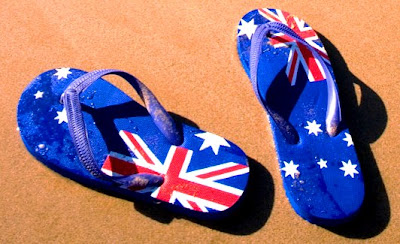 Melbourne is usually 4 seasons in one day.

Really love this song - it's Melbourne.
Posted by Leon Sims at 6:49 PM 5 comments:

Visiting in the Loire


We left Susan and Simon's home, yes and Celestine most probably in the mid afternoon to catch up with Carole and Michael. We may have mentioned before that we met them by renting their cottage in Thenay for a week on a previous trip. I particularly remember Michael bringing around a huge cane woven basket of greens during the week and an offer to join them for dinner on our second last night at the cottage. They had another couple staying at their home, strangely enough, that they also met through renting Thenay.
We were invited for two night - well I'm sure that they would have welcomed us for longer however Sue and I have a policy of not wanting to outwear our welcome. There's and old saying that guests are like fish, they start to smell after two days. Mind you, I thought that I may have made a disgrace of myself after what may have been a bad oyster - which we won't go into at this time.

I may have mentioned earlier that this trip was a birthday present from Sue to celebrate my 60th birthday. She said would I like to have a party at home or dinner in Paris for my 60th - well you must have guessed by now what my choice was. Paris was not far away.
Posted by Leon Sims at 10:32 PM 13 comments:


Friends - they enrich your life, don't they. And when they have birthdays, you get to celebrate with them. Sue and I are very fortunate to be surrounded by many very good friends in our various spheres of life. Cycling, travelling, car clubs, family and just generally in life, we have a great circle of people that we enjoy spending time with.

This weekend was one of those weekends that many of those friends came together to celebrate a special birthday. Our cycling, sailing, MG owner friend, Dazza was celebrating his 50th birthday. 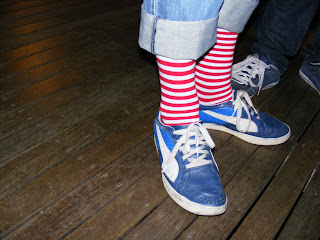 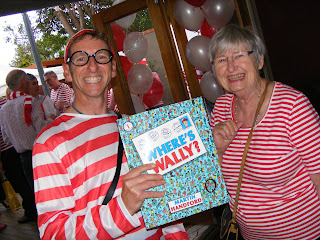 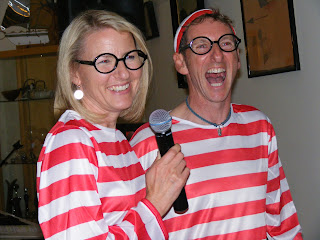 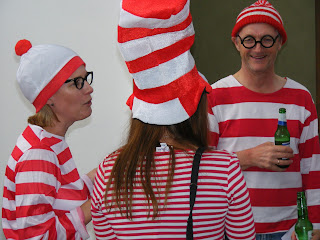 And on the following Sunday, our friend Bob was celebrating his 59th birthday so with Champagne in arm, we trundled to see him and good wife Jenny. I have to tell you that my mate Bob is a regular bower bird. You know, a person that collects things. His garage, side way and attic is an Aladdin's cave of collectables. The myth goes that Bob has never sold or thrown away any of his possessions in his 59 years. During our champagne sipping, Bob emerged from the garage to display the bike he was given many decades previous that was a birthday present. Since then his passion ignited so many years ago still burns bright. Bikes are his world. 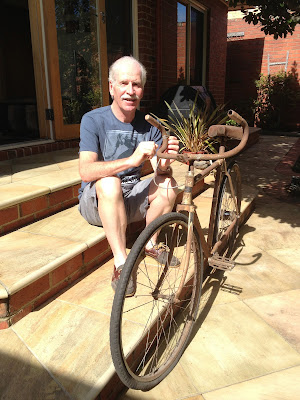 Next Wednesday's in France we visit still more friends in the Loire - hope your weekend was fun.
Posted by Leon Sims at 11:01 PM 4 comments: