I seem to be on a roll here.

So many Ghost Signs in Melbourne lately or is it that I'm just noticing them more these days. This time in South Melbourne, one of my favorites suburbs, there it was. I just happen to take a different direction to work as I do sometimes during the middle of the week. There it was, a huge ghost sign shouting at me "CARLTON DRAUGHT" on the side of a building I had once photographed on an earlier post. I hadn't noticed back then the ghost sign on the side of the building as I had previously approached it from the other direction. 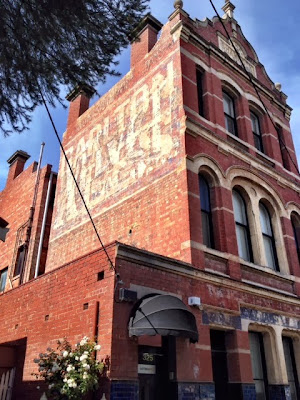 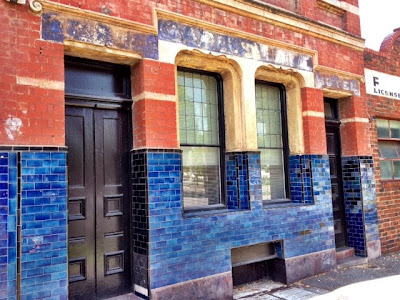 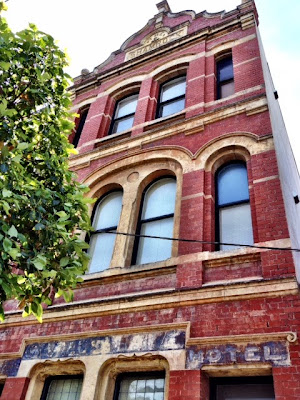 The Shamrock Hotel's ghost signs are very weathered these days and my photos don't do it justice with my iPhone but you can still appreciate the historic architecture. That's where ghost signs hide - on our early buildings.
Posted by Leon Sims at 4:41 PM 1 comment:

Remember last Monday when I was on my way from an appointment and in the back blocks of Brunswick Melbourne, I found some "ghost signs" - signs that have weathered the ravages of time.
I think the owners of some buildings preserve their ghost signs with a sense of history. This time I was travelling through another inner suburb of Melbourne. Carlton has always been a favorite of mine with many memories from my "young man" days but we won't go there!!!!
Suffice to say that Carlton retains much of its early historical architecture and heritage. Drummond, Lygon, Rathdowne, Canning, all streets that deserve some exploring - not by car but by foot or bicycle. Take the time to stop for some of the best coffee in the whole world - well, maybe not Italy. Maybe that's because we so many Italians that settled in Carlton after the war.

Coffee, that's sometimes what I do on the way to the office and this morning was no exception. I know this little cafe just across from the Melbourne Cemetery (our Piere la Chaise) that is quiet and friendly and it has ghost signs on the exterior walls.

Renovations to Filou's Patisserie, on the corner of Fenwick and Lygon Streets North Carlton, have uncovered advertising images from an earlier age as a grocery shop. Products like Lux Flakes and Velvet Soap may be familiar, but what about Hardy's Jelly Crystals, Butterfly Dutch Cocoa and Electrine Candles, claimed by manufacturer Kitchen and Sons to be "the best candles in the world."1
From the Carlton Historical Group http://www.cchg.asn.au/ 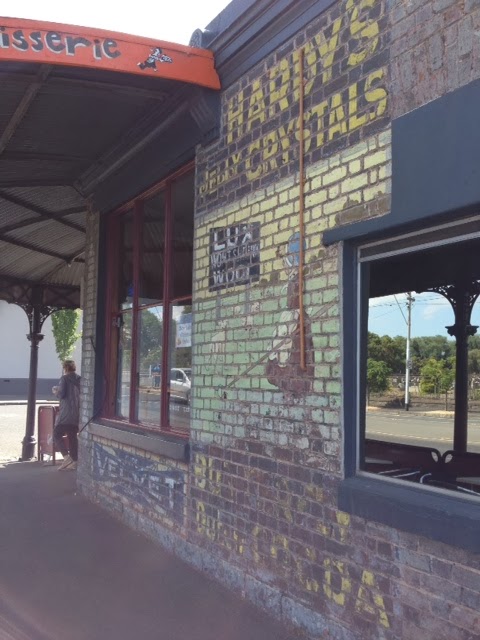 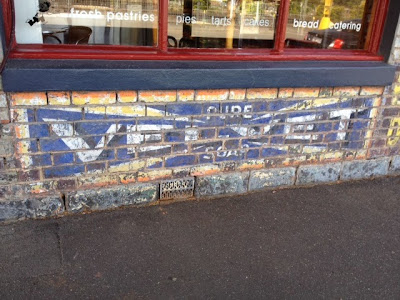 Think I will some more exploring in Carlton soon.
Posted by Leon Sims at 8:39 PM 4 comments:

And they say Australia is not racist or sexist
Well maybe - maybe not 5 decades or more ago.
I lived in the northern suburbs during the 10 pound Pom era.
I was in primary school with immigrants
from Italy, the UK, Greece and other countries that I had never heard of!
But we were all just kids in the school playground - we didn't care where you were from.
We learnt much from being invited into each other's homes.
Adults were more concerned about these people from other countries.
Kids integrate better than so-called adults. 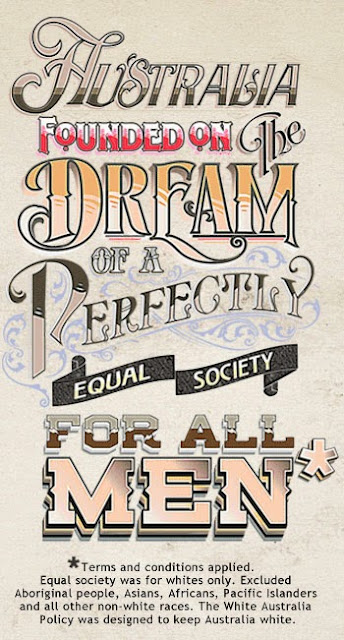 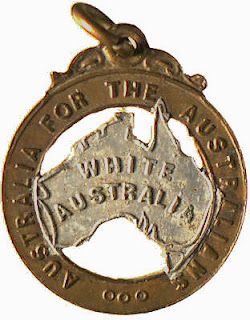 You know sometimes finding a topic for a post for the blog is taxing - life is busy.
And then inspiration finds you!
The weekend was all time consuming.
Our son Mitchy arrived back home
from four months in India and South America.
He had so much to tell - we took time to welcome him back home.
Listen to his adventures - see his photos - amazing.
It was Sunday night and I had no posts for the Blog.

Then this morning I was in Brunswick, Melbourne
for a customer meeting.
Brunswick - so eclectic - so cosmopolitan.
But small pockets of the past still shine out, not so brightly as once was.
Ghost signs. 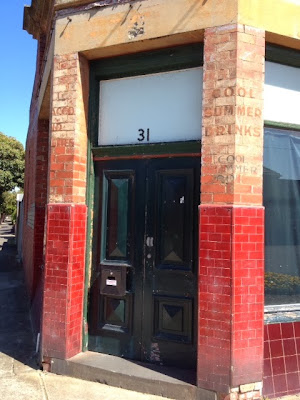 These buildings with ghost signs were within one block of each other.
I should do some more exploring with my iPhone.

Tomorrow - Saturday Arvo @ Bonsoir time we go to pick up our son Mitchy from Melbourne airport. It's been 3 months of travel for him. Some time in India and then some time in South America. Can you imagine how much he will have to share with us?
Mitchy has a great sense of humour bordering on the sense of the ridiculous.
I wonder where he gets it from?

We've been busy planning next years trip. It's about spending time with friends - they are what makes life more interesting, and somewhat more enjoyable. We've been very fortunate in our travels and our time at "Melbourne - home on the bay" to have good friends.
We've booked our lease car, a Citroen C4 which we pick up in Milan before driving to Tuscany to meet our Bayside cycling friends for the Retro cycling event called L'Eroica in Gaiole, Chianti. It will be a little bit silly as we ride on old steel bikes over the strada bianco - gravel roads in the hills of Tuscany. No carbon fibre or uncountable multi-gears on these bikes. We trade our Lycra for wool that was popular up until the 70s.
The local towns offer the riders local food and wine as we ride the 135 kms, some may do the 200 kms. Not for me the 200 kms. I could do it but it would mean less talk, less food and more importantly, less wine.

We've even booked an apartment in Paris for our last week. We've stayed there before in 2010 and we know an American fellow who lives in the Loire who spent some of his younger years in the district (you know the area well, don't you KB). 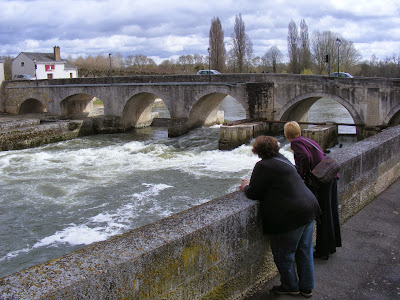 After two weeks in Italy, we'll meander towards France and the Loire valley to meet up with people we've met from past travels to the area. I may have mentioned it previously but Sue believes the Loire is her spiritual home. We've certainly had some memorable experiences in this very pleasant part of France.

Only eleven months and much saving ahead to go.'

Rummaging through bits and pieces while finishing off another room in the house - that would be the study, I found some old photos that my father asked me to keep safe. They are of his father, my grandfather and Pa's two brothers.

My grandfather was the caretaker of Studley Park, Kew and lived in the Caretaker's house within the vast parklands overlooking Melbourne city. It was not more than 5 miles away and situated at an elevated part of the inner suburbs.

His brothers, Ernie and Leslie were I guess what you would call Bovver Boys back then. Ernie was a boxer, and not a bad one if old newspaper clippings lead you to believe. He fought under the name of Bullant Sims. Obviously not a big bloke.

As for Leslie, he had other talents with around thirteen offspring, can't really be sure as he had two wives. Not sure if that was at different, or the same time - skeletons in the closet, I'm sure.
Leslie Roy was a nice old chap from memory, bit of a bantam rooster I'm told.

As for my grandfather John, he was a really nice old bloke and I spent many weekends at the parklands with him and my grandmother Tilly (Matilda). They were very caring but totally opposite. John was a smoker and a drinker and Tilly was neither. I still remember the smell of nicotine on his clothes. I was only about 12 years old when they passed away, Tilly first and John not long after. I can remember being at my grandfather's funeral and seeing my father shed tears for his father - I'm sure I will be the same if my father Jack (92) doesn't outlive me. He's a stayer!!!

Cup Day - Four Days away from the Office.

It was last Friday that we polished off that bottle of bubbles and now its Tuesday night. Can I tell you that after four days without a thought about work, I really don't know where the time went.

Naturally there was the usual cycling with some great mates, there was delicious meals conjured up by that super cook, my wife Sue. I painted and finally completed the study, the trilogy of room renovations.
Funny - I thought that a trilogy was in three parts but Sue has another room on MY list now. I think she read "Hitchhikers Guide to the Galaxy" - a trilogy in four parts. My only worry is her list for me won't stop at four rooms.

Lawns were mowed, cars were washed, I even painted an old pine table for use at Christmas as its our turn to have the masses for the season's festivities.

Today was Cup Day - that's the Melbourne Cup horsie race thing. Not big on horse racing but I'd like them for putting on a show that STOPS a NATION and gives me a four day weekend. We caught up with the traditional BBQ Cup Day with friends.

Being so busy this weekend, I actually haven't much in the way of a post other than to say I think we enjoyed ourselves.

I'll leave you with a photo I took on the way home on Friday night. It must have been about 6.00 pm with the cloudless sky giving some indication of the weather in front of us. Daylight saving making the evenings longer to do things such as sitting on the deck drinking Champagne on a Friday night.
I really can't tell you much about this statue, I guess you'd call it a statue!!!!
It's always intrigues me and I always think I must stop and take a photo (iPhone) and post it on the blog so there ya go. 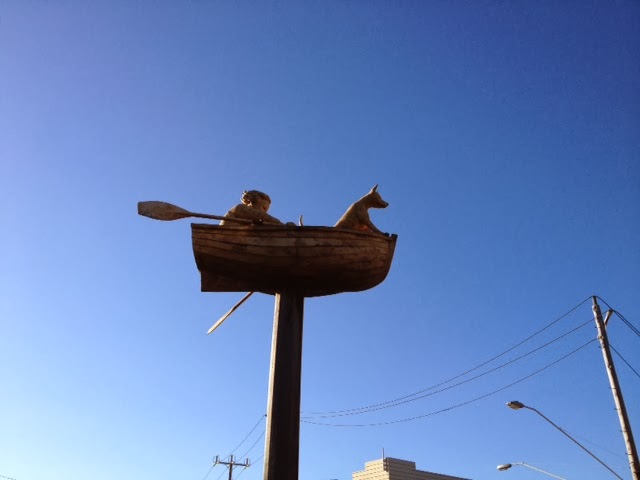 It's a tradition in our home - good week, bad week - both good reasons to finish of the week regardless,  for Champagne Friday. 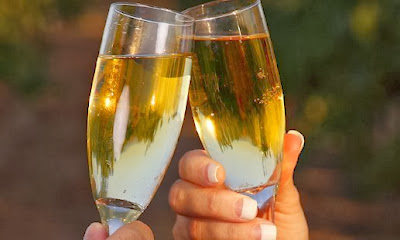 Our boys have become accustomed to Champagne Friday to the extent that they have started the same tradition in their private lives. And even if its been a week of frustration, its a good way to welcome a weekend.
This is especially a good weekend as it is the traditional Melbourne Cup long weekend where the whole city of Melbourne stop for a horse race - the Melbourne Cup.

Although its on a Tuesday most Melbournians take the opportunity to take the Monday as well. I believe in France they call it a bridge weekend. For me its an opportunity to enjoy a few rides on the bike in Melbourne's spring weather, do some more painting in the house and to enjoy the company of friends while watching a horse race that stops a nation on one day in November. Tell you more soon.
Posted by Leon Sims at 9:56 PM 10 comments: