In Our Own Good Time!

Things change over time. I often hear the phrase, "In my time". I actually hear myself saying something similar these days. "In my time" or "when I was young". Born in 1950, I remember when television arrived in Australia just in time for the 1956 Melbourne Olympic Games. It had this huge channel changing knob - today I have to look at all these array of buttons on the remote control and wonder which one is for volume!

The same goes for voice recorders - yes, I know, we called them Tape Recorders but these days things have changed dramatically. Last weekend we attended a birthday gathering and one of the guests brought along a tape recorder which is still in perfect working order. The tape had conversations by his parents - Dale is currently in his late 70s or thereabouts. I guess the tape recorder was from the 60s.

About six years ago I published my book on motor racing and interviewed many past drivers from a 4 decade period over the 30/40/50/60s. Initially I used a cassette recorder and later a new digital recorder. The digital recorder was less intrusive.
Transcribing recordings to text was always a time consuming exercise. I've just discovered an easier process called "Voice to Text".

Just recently I've been invited to join a Cycling Historical Committee under the auspices of Cycling Victoria. Over a short period they have been fortunate to have donated magazines, scrapbooks and memorabilia from local cyclists and enthusiasts. We are currently collating the material and occasionally you stop to read some of the interesting material - that certainly slows the collating process.

So - that brings me to this new method of converting voice to text. I discovered this App for iPhone and iPad that coverts your voice directly to text. If I see and article that is of interest in the archives, I simply read aloud the article into my phone which through this App, converts it to text. I then email it to my computer for the final editing and spelling corrections. So simple.
Then I just cut and paste it to a Blog post or a manuscript.


I found this on You Tube describing Voice to Text, especially for Bloggers
.

Well, not really in our back yard but just over the road from home.  I mentioned a couple of weeks ago on a Friday Grump post that we seem to be getting built out here in Mentone. Lately there has been a spate of apartments being built in our suburb. Several are the usual two story townhouses but now we are seeing developments of multi-level apartment blocks going up. They won't be cheap either. One that's been completed for over a year now has a gym, restaurant and several fashion shops. Another three are on the drawing board for the next 12 months.

The one across the road from us will be another lot of "Luxury" apartments. The big hole I mentioned will be an underground two level car park for the residents. It's huge so no telling how many apartments, and how many new neighbours we'll be getting.

They tell me its progress and that we need to grow our population for the economy. Well that's all well and good but we were here first and it use to be a nice little village atmosphere here in Mentone.
Or maybe I'm just a grumpy old man. Mind you, the cafes are getting better and we do have some great eating houses now.

Email ThisBlogThis!Share to TwitterShare to FacebookShare to Pinterest
Labels: Mentone

Hmmm! I wonder what the weekend brings? 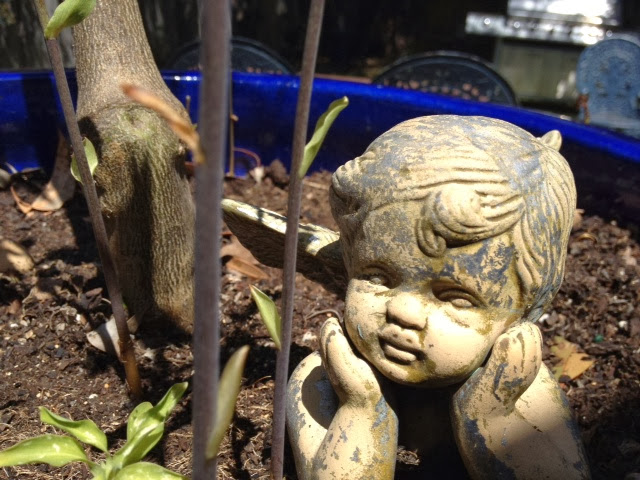 Hmmm! I wonder what the weekend brings?
I know there's more painting, maybe a ride on the bike and some food and wine.
Tell you more Sunday night.

These happy folk come from Geelong - they welcome people as they arrive at Melbourne Airport.
You'll note that they have brochures that they hand out, telling you of the delights of this regional city about an hour out of Melborne city. 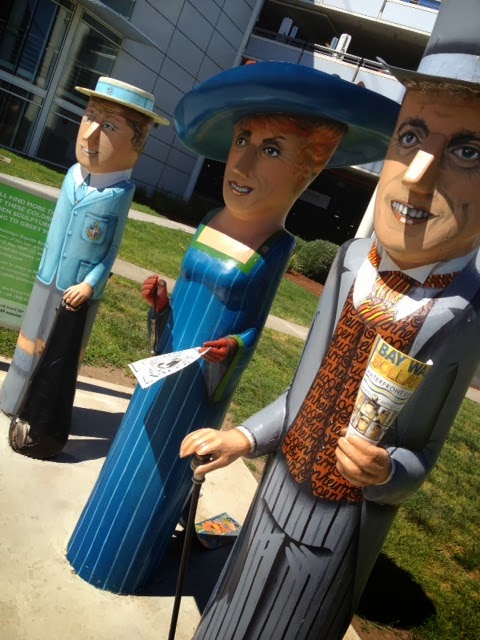 Another busy weekend with house renovations made for little opportunity to report on anything interesting for posting. I'm currently on my third room of the house which happens to be the study. Sanding woodwork, undercoating the ceiling and walls so that I can paint the top coats and the woodwork next weekend.

Melbourne had some great weather with temperatures in the high 20s. The nearby beaches here in Mentone to Mordialloc drew the sun worshippers out while on Sunday the annual "around the bay in a day" cycling event was staged.

Seeing that summer is just around the corner, I thought I'd post some pictures of our local beach crowds from days gone by. 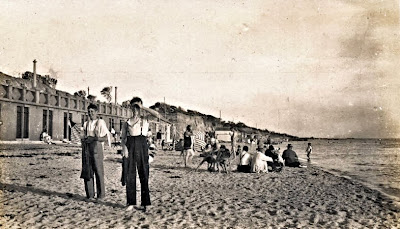 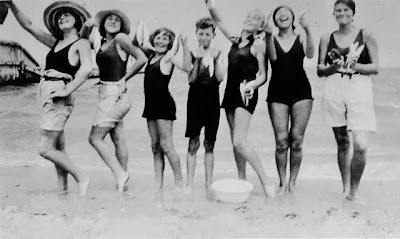 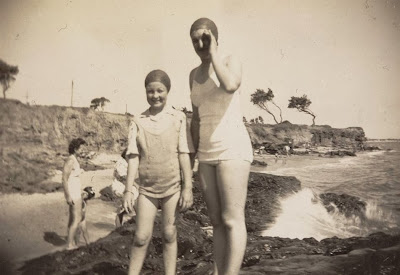 RAGING FIRES IN NEW SOUTH WALES
While local residents in Bayside Melbourne enjoyed early summer conditions at the beach - spare a thought for our New South Neighbours currently experiencing the most devastating fires in memory with over 200 homes destroyed and a fire front of 300 kilometres.

Email ThisBlogThis!Share to TwitterShare to FacebookShare to Pinterest
Labels: Mentone

Yes, I know, I've been missing off the radar for a week or more but I've been busy lately - OK!!!
Work at work, work at home - where does the time go.

I enjoy blogging, you meet nice people, you enjoy that little bit of voyeurism, looking into their lives, sharing yours. Sharing where you live. You know I pass so many interesting places on my 50 km journey to work each day, BTW that's 50 km back home as well. BUT I'm too busy to stop as I admire the buildings, the people I pass, people commuting to their 8 hour day.

This week we had our annual ride to work day - not me, I'm in my metal womb because who wants a 100 km ride to work and home again. So my day consisted of a drive to South Melbourne for breakfast, coffee and fruit toast, a latte and a read of the Melbourne Age newspaper. I like the Age, it has great articles and Thursday has the week's Melbourne tellie guide.
After brekkie at the cafe, I almost passed a building that has intrigued me for ages - but this time I parked the car and took my iPhone for a photo shoot.
The building sits on a corner and displays "ghost signs" that beckons you to imagine what went on inside over a century ago. What remedies did they sell? Did they work? Cures for 3d, miracles for 6d. 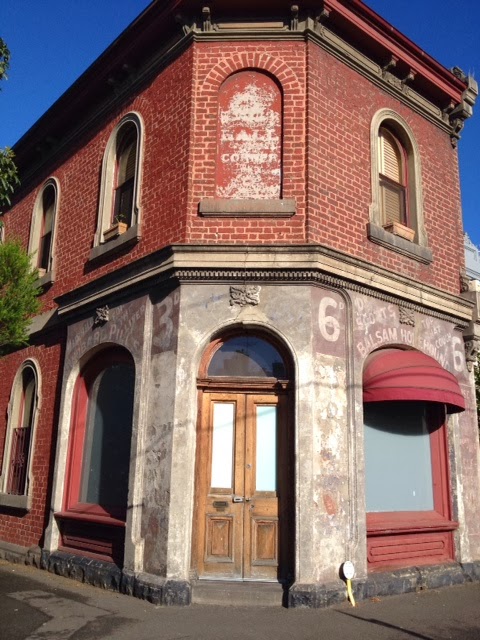 A Wednesday in Venice

We drove from Tuscany
to Venice for a three night stay.

Venice is a city like no other
a must visit place in your lifetime.
2006 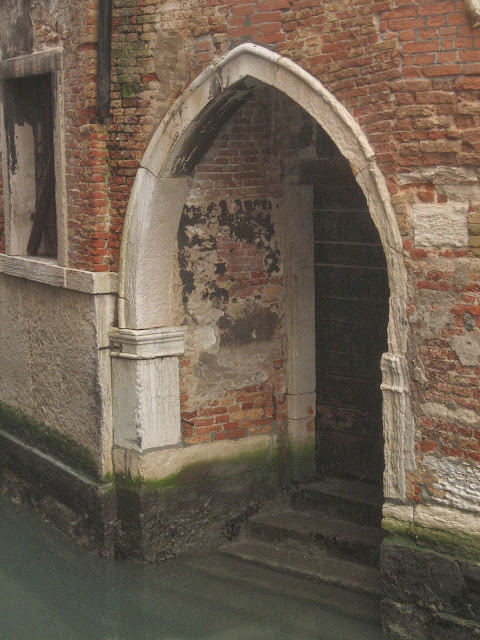 There's a  street in Beaumaris called Tramway Parade - its origins come with a piece of local history that can  be found within the archives of the Kingston City Council. KCC covers the suburb of Mentone where we live. No sign of the Beaumaris Tramway Company remains today except for the street sign, "Tramway Parade". 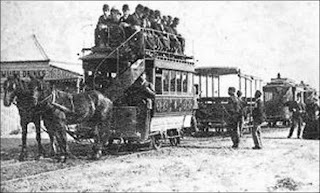 The horse drawn tramway was the brainchild of land speculator, Charles H. James and no doubt he saw the building of a tramway as a business opportunity to sell land. The railway ran from Melbourne to Sandringham near Bay Road. A second line ran from the city to Cheltenham. It was Charles James' aim to link these two stations via his horse drawn tramway which would take a course over the land he hoped to sell.

The first section began in February 1889 from the Cheltenham Station and took a route down Charman Road, turning right at Balcombe Road where it then turned left at the street that still carries its name - Tramway Parade.
Taking its course on a straight ahead direction before meandering it finally reached the beach at Rickett's Point on Beach Road.
At the same time, the route from the Sandringham Station took a course along Beach Road to the Black Rock corner where Balcombe Road and Beach Road meet. Eventually the two tramways met to connect the railway stations of Sandringham and Cheltenham.

With the tramway being powered by both two and three horses at a time, there was a need to house and feed them. Stables were set up midway where 25 acres were set aside to grow oats and for stables to be built. This was in the region of Oak and Pellatt streets.

During those prosperous times of the late 1880s, there were all sorts of land speculating going on and businessmen privately financed infrastructure in the hope that by bringing people to the area, they would become rich through the sale of their land. Many did but unfortunately the Beaumaris Tramway after serving its purpose for the speculators, became unprofitable. The operators allowed the tramway to fall into disrepair. It often derailed due to the lack of maintenance and people refused to use it.

The tramway continued to run until 1915 when the depression started to hit Australia. That would be the end of the Beaumaris Tramway Company. Charles James obviously had vision for the area as much of the real estate from Sandringham to Beaumaris and then Mentone and Mordialloc today are much sought after. Beach Road which was once a sandy country track is now a main thoroughfare with huge homes overlooking Port Phillip Bay. I'm also happy to say that its the most prolific training route of elite and weekend warrior cyclists that is quite unmatched throughout the world I'm told.
Charles H. James foresight was the inspiration of a second tramway, an electric one that began operation in 1919, but that's another topic for a future post.

Much of the reseach comes from TROVE, and the Kingston Historical Society.
Posted by Leon Sims at 6:33 PM 8 comments:

Email ThisBlogThis!Share to TwitterShare to FacebookShare to Pinterest
Labels: Beaumaris

Even the Cat loves our new Bed 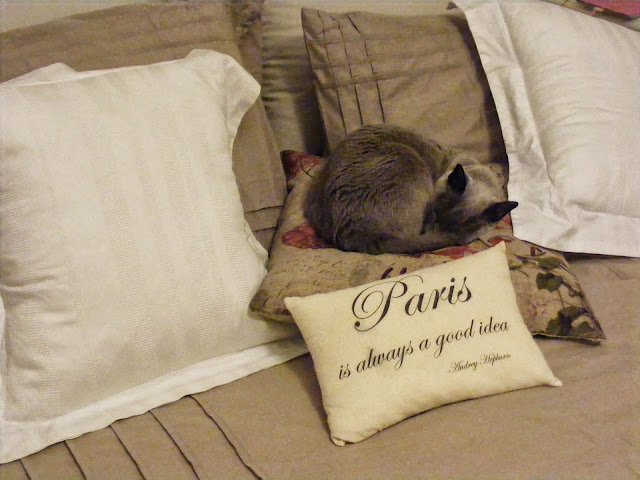 Back in the Bedroom

Regular readers may remember the bathroom saga which went on for a few months - OK, I'm not your most efficient DIY handyman but I eventually get there. The next project was the bedroom, not so long to do. 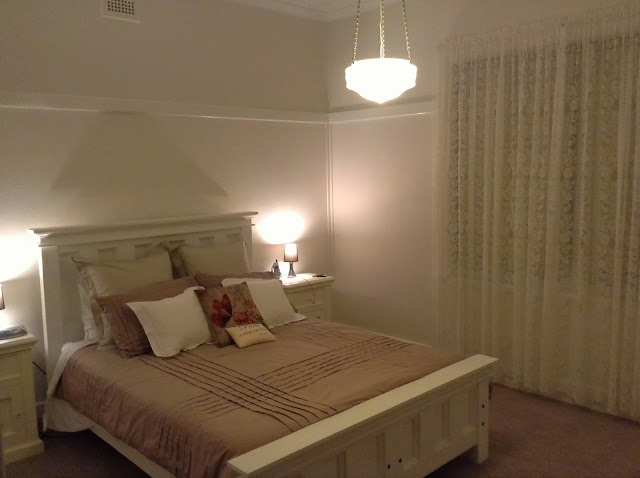 Fresh paint, some redecorating. Bedrooms are not so laborious as bathrooms. I'm told by friends that if you want to maximise the appeal of your home for sale, bland is the way to go. Take away your own personal tastes. No purple feature walls. Keep it neutral - I think we've done this with the bathroom and now the bedroom. 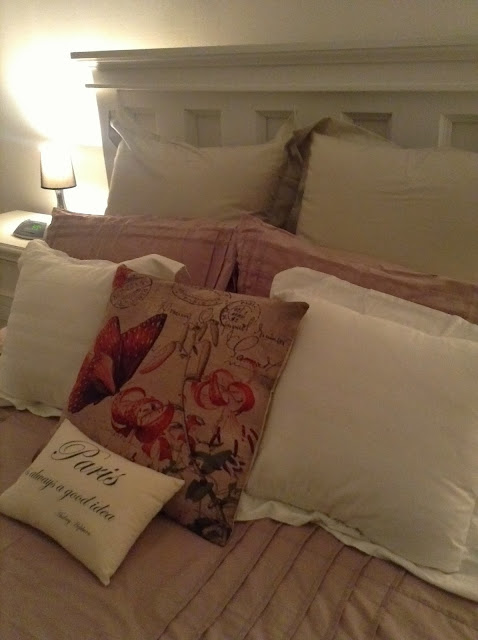 The only question now is - what room is next Sue?
Posted by Leon Sims at 8:08 PM 6 comments:

Almost forgot my Wednesday in Italy

The Bridge of Sighs
Venice 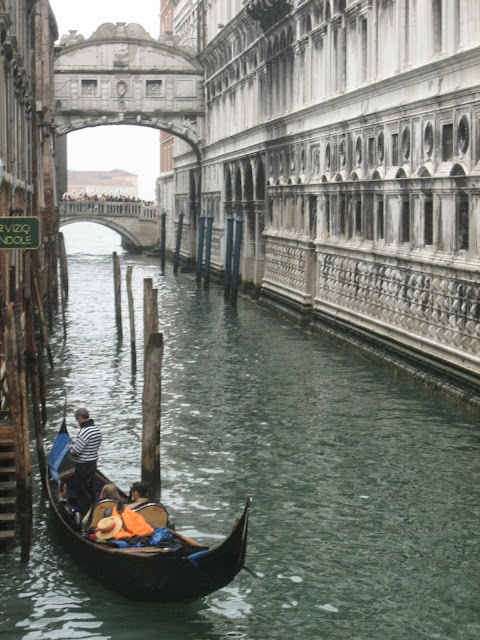 Sue had been there before me
in a former life.
She wanted to share her experience
with me.
The Bridge of Sighs comes from Lord Byron
who said it was the last view of Venice
before prisoners were marched across the bridge
before being lead down to their cells.